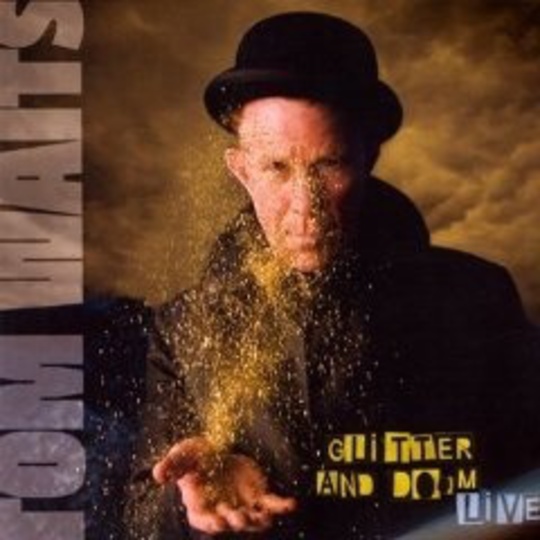 Recorded over the course of his Peskajumba tour, Glitter and Doom Live joins Nighthawks at the Diner (1975) and Big Time (1988) as chronicles of the awesome and, across the span of years, protean experience that is Tom Waits live. The shift in musical style across that time has been profound. On Nighthawks... Waits was a whisky-soaked, ash-speckled balladeer wandering a Los Angelean metropolitan district that might never have existed outside the pages of John Fante's Ask the Dust. 13 years later, when Big Time rolled into town, he had revolutionised his sound.

1982's Swordfishtrombones is traditionally seen as the watershed moment when Waits moved from talented songwriter to visionary artist extraordinaire, a reputation he’s burnished by making a lot of great, some good, and very little bad music over the last quarter century. No small amount of greatness lurks in the deep creases of his career before Swordfish..., but it was that album’s lurch towards keening horns, shard-like guitar work and exotic instrumentation like Waits’s beloved marimba (he’s even credited with playing a chair on ‘Shore Leave’) that sealed his living canonisation.

But move back to the album before Swordfishtrombones, 1980's Heartattack and Vine, and you'll find the blueprint of the unholy, spittle-streaked blues that his current sound, having moved in part away from the Eastern European fairground menace of The Black Rider, Alice and Blood Money, has now returned to. True, it’s a version of those blues viewed through the distorting lens of Marc Ribot's singularly harsh and atonal guitar style – Ribot, who first appeared as a session player on Rain Dogs (1985), might not be in Waits's band anymore, but has left an indelible mark on its sound – but whatever you hang above the fireplace, it’s basically the same fireplace.

Regardless of which era they hail from, most of these songs have a different emphasis in the live arena than on disc. The set-list here reaches as far back as ‘Singapore’, the opening track on Rain Dogs, but for the most part is assembled from the slightly sparser array of records between 1992's Bone Machine and 2007's triple album Orphans. In the case of most of these tracks, their live rendition is the sum of both gains and losses. ‘Goin’ Out West’ loses those juddering blurts of guitar that characterise its heavily produced recorded version, but in the process gains a more pronounced sexual swagger, as well as giving freer rein to the wicked humour threading the lyric. 'Metropolitan Glide' generates a woozily skewed funk, but is about 1/100th part as insane as it sounds on Real Gone (2004). Similarly, on disc ‘Such a Scream’, another Bone Machine highlight, is virtually a techno record, its alien abrasiveness impossible to recreate live without some serious digital kit, but here it’s reconfigured as a salty stop-start blues. Even if you think the original’s superior, you’ll be glad to have this version.

Other songs appear in versions that instantly become definitive. ‘Circus’ (from Real Gone) weaves in a magical refrain from ‘Under Paris Skies’, and sees Waits holding court in his carnival barker role. ‘I’ll Shoot the Moon’ is magnificent, too, Waits stretching the vouchsafing of his phone number into an absurd stream of digits that put me unexpectedly in mind of Boards of Canada’s ‘Aquarius’.

A second disc, ‘Tom Tales’, collects a little over half-an-hour’s worth of absurdist, pun-heavy and cabaret lounge inter-song anecdotes. Part of me wishes the whole set spread over two discs, chat and all, comprising a show in its entirety (albeit in ersatz form, given that the songs featured here were recorded in 10 different cities), but no such complaints pertain to the recording itself: the crowd is nicely mixed, atmospherically audible but not bootleg-intrusive, while Waits’s band sound impressively tight. But finally, there’s only one test a live album has to pass, and this one stands up to it: if you were there you’ll be prompted to bask in the memory, and if you weren’t you’ll be wishing like hell that you had been.