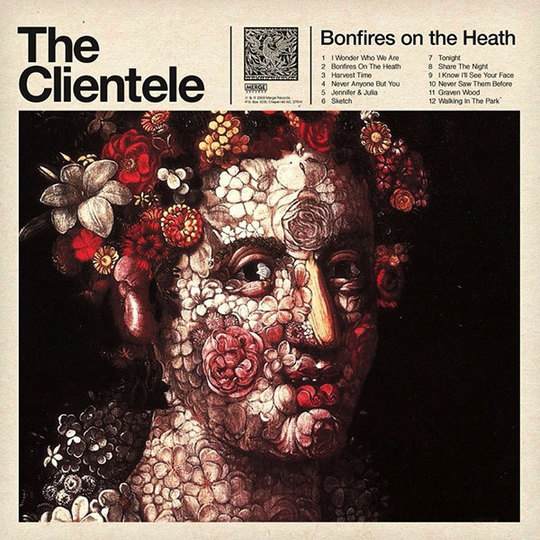 It might seem like rather a grand statement for a band who have developed their sound in such an understated and gradual way as The Clientele have, but this feels very much like the album we've been waiting for them to make. The London-based four-piece have always had a way with dreamily melancholic pop and to many ears Bonfires On the Heath will sound much like all their previous offerings, the only notable difference between it and the earlier efforts being the additional presence of keyboardist/violinist Mel Draisey and the odd flourish of brass or Spanish guitar. However, it is The Clientele's ability to completely envelop the listener in a mindset/a mood/a landscape/a moment for an album's length which makes it all too easy to describe them as "atmospheric" and they've never done that so effectively as they do here. Upon first listen the whole album could easily seem like one slow blur except for the way in which a few up-tempo tracks stand out against the general autumnal haze.

In this respect opening track 'I Wonder Who We Are' is something of a false start; it almost sounds like disco, but in the more r'n'b derived sense as opposed to Giorgo Moroder style synthetics, with it's funky rhythms and luxuriant strings complimented by some jazzy ivory tinkling and warm brass. It recalls some of their finest moments as a "pop" group (although without quite matching their greatness), such as God Save the Clientele's 'Bookshop Casanova', with the presence of some "badap-badah-bap-bap-bap" being one of the record's few wilfully accessible features. While the up-tempo tracks stand out against the album's predominantly low-key atmosphere there is a consistency amongst them also; 'Share the Night' has guitar and bass which are rhythmically identical to those of the album opener (if a little sped up), as well as similar brass refrains. 'Three Month Summer' is a gorgeous meeting place between these two tracks and the more sedate tone that dominates the album, taking the same rhythmic template, but slowing it down dramatically. In doing so it manages to be just jaunty enough to reflect the joyous lyrical allusions to vanishing in "the brief ecstatic rain", whilst sounding quite at home with the more stately adornment of gently sweeping strings and picked guitar, which are more obviously evocative of the wistful nostalgic overtones at the song's (and indeed the album's) heart.

The title track is appropriately representative of the pervasive mood of Bonfires On the Heath with the gentle plod of its picked acoustic guitar, slide guitar and woodwind like vocal harmonies exuding the comforting warmth of dappled beams of low angled sunlight on bronzing foliage, whilst the lyrics speak outright of "late October sunlight in the woods. However, McLean tempers the picturesque tone with a slight nagging sense of unease which is typical of the album, as he follows this line with "...nothing here moves quite like it should." Similarly lines like "Evening comes the fields are full of voices, she said don't be afraid of what you hear" ('Never Anyone But You') and "Let's go out and find a place that no one knows, when the eeriness comes and goes, when the loveliest season seems strange ('I Know I Will See Your Face') seem to be haunted by the lingering ghosts of dying summer and a distant pastoral England.

Despite the rural imagery scattered throughout The Clientele never really sound quite rustic enough to be folksy, their sound being far too smooth and sensual, and more interested in the illusionary effects of nature and the seasons. They come closest on 'Harvest Time' where the ominous hum and quivering electric guitar is reminiscent of the British folk-rock of The Fairport Convention, but even then it is enveloped entirely within The Clientele's own distinctive sound, with Alasdair MacLean's ever-wistful vocals. Musically the majority of the album follows the example set by the title track; mid-paced, acoustic picking decorated with tasteful brass and strings to create music of an almost permanent melancholic disposition, but which never resorts to angst or melodramatics either in terms of melodic movement or sonic details. The only song that really does attempt any real juxtaposition is the aforementioned 'I Know I Will See Your Face', which peppers the smooth pop with mariachi style horn arrangements before descending into a splash of cymbals followed by a highly stylized Spanish guitar solo which is rhythmically disconnected from the rest of the song.

However, the definitive characteristic of Bonfires... is undoubtedly the manner in which the autumnal mood pervades every track. There isn't a great deal to distinguish between songs like 'Jennifer and Julia', 'Tonight' and 'Walking In the Park', even MacLean's vocal delivery rarely strays from his whisper that falls somewhere between sad and seductive. However, they all contribute to the consistency of atmosphere that makes the album in itself such a distinctively satisfying listen, and one in which anybody who makes the initial effort can immerse themselves entirely. As such it is without a doubt an album which deserves be heard in it's entirety in order to truly unearth its exquisite charms. This is an increasingly unfashionable concept, but then The Clientele are a completely singular band and Bonfires On the Heath is an album by which to truly cherish them.