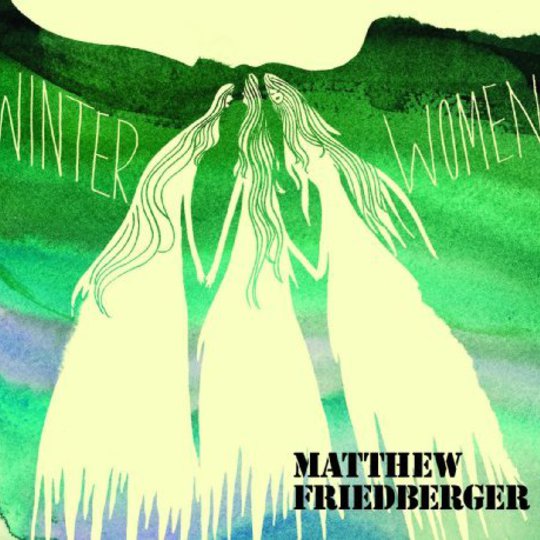 It is hard, nay impossible, to write a review of Matthew Friedberger's (him out of the Fiery Furnaces) solo double album, without mentioning the debacle surrounding his denunciation of Radiohead's 'For Harry Patch'. Beck waded in at one point with a ten minute track about the composer Harry Partch, and Mr Friedberger just ends up coming across as slightly... cuckoo (DIRECT QUOTE: “The socially or individually idiosyncratic association of words and phrases on an aggressive, and often aggressively trivial, a semantic basis is so certainly a, if not the, main source of any sort of dynamism that pertains to the ludic, and what perhaps derives from the ludic (that what has often been conceived as the opposite of the ludic) – this is so certainly the case as to release me of my obligation to finish the sentence directly.”

To those more familiar with The Fiery Furnaces' oeuvre, this will come as no surprise. This is a band, after all, who have recorded an album with their grandma, and a concept album about a boat loaded with blueberries. As the main creative force behind the band, you'd expect it to sound not unlike a new Fiery Furnaces album sung by a man.

You wouldn't be far wrong. There is something truly unique about the way Friedberger yields a guitar, or a piano, or any other instrument, that gives everything he does a certain, unavoidable, feel. No matter what diversions, innovations or improvisations he makes, it always sounds like him. The sound here is more like mid period Fiery Furnaces than the more conventional melodies of I'm Going Away (which makes sense, as it was recorded between Bitter Tea and Widow City).

The first of the albums, Holy Ghost Language School, is a concept album. The narrative concerns Pentecostal businessman Scot Dombrowski, who starts a school for using speaking in tongues for business negotiations. Yes. The vocals are low in the mix, meaning you need a guide to find them, and any meaning within. If any meaning is to be found in lines such as this: “Things were going so well I had to hire extra instructors for the mutually comprehensible Cantonese and Tagalog angel Abdiel tugboat to container slow the what in his name...”

Despite the borderline nonsense of the lyrics (and really, what did anyone expect) it starts strongly. The simple guitar riffs departing into synth lines that echo what came earlier in 'Seventh Loop Highway' make it an easy intro, an easing into what is yet to come. 'Do You Like Blondes?' makes you feel like you're trapped in Mushroom Kingdom, as an endless phalanx of Super Mario goombas march towards you, out of the speakers.

Both records are full of myriad detours into other realms. This adventurousness proves to be one of its failings. 'I Started Using Alcohol At The Age Of Eleven' returns again and again to a tender/sad piano motif, but intersperses it with synth noodling that remove all the emotion. 'First Day Of School' is full of repeated components, but none of them are really worthy of repeating. These circumnavigations tend to work with The Fiery Furnaces. Perhaps Eleanor acts as a pair of reigns on Matthew's musical excursions. Your finger is too regularly drawn towards the skip button. There are too many parts in 'P.S 213 Mini-School', and none of them fit. It's too dense. It sinks. The wonderful chorus of 'I Love You Cedric' is hamstrung by interminable interludes.

The two discs share much in common, but Winter Women is the more conventionally minded (relatively), giving the listener more to hang on to. The unwieldy titled 'The Pennsylvanian Rock Oil Company Resignation Letter' is one of the highlights, featuring some typically splintered guitar rattling, and some of the better moments. 'Ruth vs Rachel' could feature on daytime radio without anyone batting an eyelid. Breaking with convention, it improves towards the end - 'Servant In Distress', found in between a few other winning tracks, could soundtrack a tense moment of melodrama in a Wes Anderson film.

After all this, you just feel.. overwhelmed. Overwhelmed by synths. Overwhelmed by over-instrumentation. Whatever spirals around Matthew Friedberger's brain is always interesting, but here tracks derail halfway through – riffs are drawn out longer and longer, without any justification. No one asked for three minutes of 'Big Bill Crib and His Ladies of the Desert' and its clattered drums and staccato synths. Too much merges into an avant garde gloop.

The Fiery Furnaces are one of the few truly novel bands that we have. Their magic lies in adventurousness entwined with a dedication to purpose. Everything is there for a reason. Here, too much feels extraneous. In the age of Spotify and iTunes, Friedberger is (unconsciously) telling everyone to make their own version of this album, editing it down to a strange, but taut, 60 minutes. There are brilliant moments of genius here, but they just get lost, buried, and forgotten amidst the rest.

As Mr Friedberger has said himself: “The music industry has already gone to the imaginary model in many respects. Bands - at least smaller bands - only get to make imaginary livings. Of course many fans - and fans are always the most progressive element of the rock music community - have long since gone to the imaginary model. They must really be imagining things to admire the music acts they do. Let's all follow their lead!”