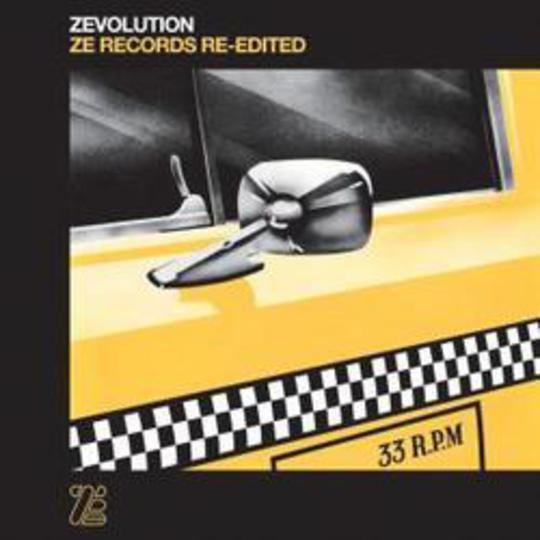 ZE Records, in its original late-Seventies incarnation, was about as screamingly queeningly agonizingly total fucking arthole-ishly cool and blood-gushing edge as it got. Its founder Michael Zilkha muscled in on New York’s disco and post-punk scenes in equal proportion, helping to popularize the term ‘no wave’ in the process. In cred terms, of course, the only way was down, but while ZE shut in 1986, they left behind a large and impressive catalogue of innovative freaks – one that pretty much no-one cared about in the Nineties. However, this decade has seen a booming rehabilitation of This Kind Of Thing, along with the appetite for cheeky disco edits increasing by about a million percent, so the coming together of some of ZE’s finest old guard with several of the most lauded new-skool re-edit types makes a whole lot of blood-gushing sense.

In what might be thought of as a nod to the fact that this is a project most useful to DJs – entertaining for everyone else, no question, but there’s a limit to how much fresh light an edit can shine on a track played in the home – the vinyl version has an extra track, a mix of James White & The Blacks’ ‘Contort Yourself’ by Twitch from Optimo. I have a CD copy so can’t report on it for you, but come on, it’s a pretty sure bet that Twitch will bring it. (JW&TB do feature here, however: James Chance’s sarcasm-drenched crack at disco ‘Almost Black’ is given a minimal, effective lick of paint from ex-Bronx Dogs fella Richard Sen.)

A few of these tracks have been kicking around on either white label or MP3 for a bit, such as the opening track, Idjut Boys’ take on ‘I’m Corrupt’, an album track from a 1982 Kid Creole & The Coconuts album. Given that most of the world’s view of Kid Creole & The Coconuts is basically 'LOL Eighties', on a par with Haysi Fantayzee or the Sinclair C5, this and the other Coconuts refix here (‘Annie I’m Not Your Daddy’, done over by Soul Mekanik), serves a decent purpose of reminding folks that they were actually rad and innovative. ‘I’m Corrupt’ has dog bark samples, vibraphone, a female chorus and a (very Idjut-y) bassline that doesn’t quit, all of those things being great things. To a slightly lesser extent, mainly thanks to one-hit-wonder syndrome, Was (Not Was) also fit this bill; ‘Tell Me That I’m Dreaming’, released six years before that one song everyone knows, is spliced by Manchester’s reel-to-reel godfather Greg Wilson, who delivers a echoey funk bomb that’s functional in the best way.

The extent to which the originals get futzed with varies pretty greatly. French champ Pilooski is the only nominal ‘remixer’ on here – everyone else’s contribution is an ‘edit’ – and indeed, he reduces the lyric from Don Armando’s Second Avenue Rhumba Band’s ‘I’m An Indian Too’ (a cover of a song from Annie Get Your Gun) to three words and a looped snatch of bass and strings. It’s immensely effective, actually, and fans of the original, if not the musical original, should find the spirit maintained. Superstars of the neo-edit set Rub-N-Tug wait almost five minutes before dropping vocals into Material’s ‘Bustin’ Out’. Probably the most ‘post-punk’ track on here, combining Bill Laswell’s Chic-y bassline with sheets of robot-Hendrix axewank and the vox of, er, Nona Hendryx from Labelle, it still brings the funk despite being about as corny as this collection gets.

Leo Zero, a Londoner who has remixed Florence & The Machine and reedited a manner of whiteboy emoting for the dancefloor, from Prefab Sprout to Coldplay – nothing like challenging yourself – takes on the less taxing task of discofying disco, namely 1979’s ‘Encore L’Amore’ by French trio Garcons. He actually gives it quite a makeover, paring the dramatic strings down to a minimum and slathering rubbery echo FX and ping-pongy cut-up parts all over the place. (That MOR saxophone still needs to be taken out back and shot, if you ask me, although you might feel more warmth towards it if you listen to the theme tune from Roseanne in your spare time.)

Not that the resurgence of beardo disco needs much help with its forward momentum right now, but a word to the wise: when the Lindstrom & Christabelle album lands at the start of next year, this type of wonked-out Eighties-soaked boogie FUNFUNFUN will likely garner wider attention still. You could do a lot worse than using Zevolution as an entry point. Will it make people coo approvingly at your refined and to-the-moment musical taste? Who the hell knows. However, it will definitely mean that you own a album of joy-filled jams that could bring a party to a morgue.