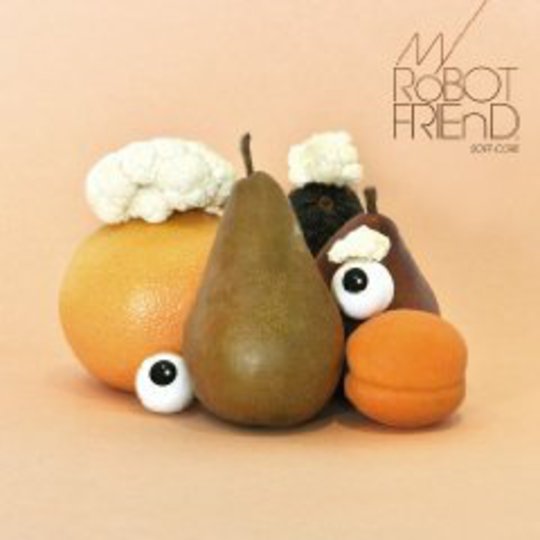 "For driving to, at night." A holographic message flashes in front of your eyes, as Soft-Core is transmitted electromagnetically to the brain. It's not hard to imagine My Robot Friend's (aka Howard Rigberg) vision of the future. Music is no longer purchased over a counter, accompanied by a nod of approval from an acne-prone muso that has been working at HMV for too long. No, if the New York-based Rigberg had his way, we'd all be law-abiding cyborgs and music would be life's one remaining illegal pleasure, an electronically-delivered drug of the future.

Like many depictions of the future, Soft-Core (at its best) has the dark isolationism of space or night as its canvass, onto which melodies and lyrical sentiments illuminate the frame like the neon of Blade Runner's opening scene. From my own slightly Ballardian point of view, these triggers of futurism converge most readily when driving at night, as the darkness meets the illumination of technology. And, appropriately, the road is the place of isolationism: the car a motive cocoon, temporarily detaching man from its organic environment as we travel from one world to another. Some of Soft-Core's better tracks successfully evoke this kind of futuristic transcendence, even if full engagement with the record depends on a little wilful mental persuasion of your own.

This, of course, has been a big part of My Robot Friend's shtick from the beginning. But Rigberg shouldn't still have to rely on the now slightly tiresome I-AM-actually-a-robot narrative trope. Frustratingly, he seems to think otherwise. During the Fischerpsooner-light opening track, 'Robot High School', the monotonal Rigberg is up to his old tricks: "Memorise the rules and learn to behave / but when I got to school I forgot, forgot / so they put me in a special class / where everybody is a robot, robot." Its generic electroclash climax – involving impossibly-tacky church bells – is completely forgettable.

Happily, and for the majority of the record, the sleazy bombast of electroclash makes may for the intimacy and minimalism of synthpop. Of course, tracks like the perfectly-crafted and deftly-romantic 'Misfits Fight Song' owe plenty to their forebears. Kraftwerk, Gary Numan, The Human League and Yazoo (Alison Moyet sings on 'Waiting') being the usual suspects. And while we're at it, Rigberg almost certainly borrowed his eccentric streak from Devo. Forgoing influence, 'Misfits Fight Song' is just a great pop track. And like the best pop, stands up to a lot of repeat spins.

'By Your Side' hits the same synthpop apex by underplaying everything it knowingly does so well, until its components coalesce as one perfectly-formed electronic love song. It doesn't take a musical sage to realise that Rigberg may have taken one or two jealous glances at the work of The Postal Service. Like Give Up, Soft-Core majors in subtlety. That's not to say the album doesn't have its madcap moments. 'Failure's' breakneck robo-speak climax, although probably lifted from elsewhere, is truly inspired.

But it's Soft-Core's final triumvirate of tracks proper (not including 'Waiting', which is rather curiously given a non-Alison Moyet acoustic encore) that define it. Moreover, they illustrate Rigberg's newly-found musical maturity and speak of a vulnerability that actually helps Rigberg to free himself from My Robot Friend's conceptual restraints. 'Astronaut' is a drugged-up tug of war between the icy detachment of New Order and the opiate sweetness of The Cocteau Twins, while 'Mean' and 'Sleepwalkers,' which both evoke loneliness, play out their reclusive tendencies quite differently. 'Mean' is a forlorn and delicate expression of shyness – "Hanging out in your living room / I'm overcome by your sweet perfume / your fever's down but your eyelid twitches / and I can't sit down 'cause my heart itches / why can't I seem to say what I mean" – encased in something sonically more hopeful. 'Sleepwalkers' appears to be equally benign, until it gives way to more malignant forces. Rigberg sings: "It left us wondering / could it be happening / was it a trick of the dark?"

With Soft-Core Rigberg has tentatively moved one foot out of the robot suit and, as a result, has opened up a little. More to the point, he's captured some fine synthpop moments on this record, amid the throwaway fluff. Probably best to transmit them to your brain and go for a long night drive...