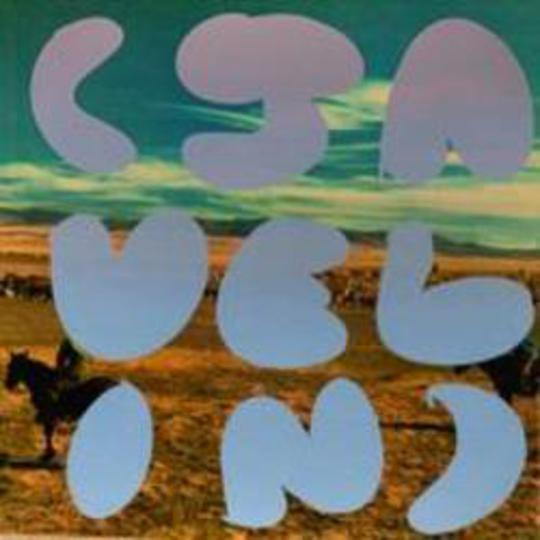 Plucky New York-based cousins Javelin’s live act sounds like a spectacle worth seeing. Using an FM transmitter to broadcast the signal from the show over multiple, brightly coloured boomboxes sounds like just the sort of gimmick that can really endear a band to people. Alas, all I have is their latest 12-inch, which falls somewhere between an EP and a mini-album in terms of length, and so is placed in the unenviable position of being compared with the image of that show.

The initial signs are less than wildly promising, as the first track is ‘Lindsey Brohan’, either the best or worst track name of the year. Contrary to all expectations, though, the song is an upbeat, poppy slice of tropical-tinged electronica, and one which shows that Javelin know their way around a melody. Thankfully, despite brief flirtations, the rest of the EP stays clear of the kind of annoying hipsterism seen in the title not just of this song, but most of their other tracks. One could be forgiven for expecting something like Wavves as a result, but instead Javelin present a genre-hopping, sample-heavy, joyful brand of dancey experimentation.

I’d frankly be surprised if the pair were not at least partly influenced by similar New York duo Japanther – the scrappy enthusiasm and miscellaneous vocal samples are common to both – but the band clearly owe at least as much of a debt to J Dilla, as they have acknowledged in interviews, and which is most obvious in the cut-up vocals and twanging bass of ‘Unforgettable Super Lady’.

There are some other bizarre but equally welcome reference points: ‘Radio’ is pretty Italo-sounding (ironically, it bears a passing resemblance to ‘Broken Radio’ by Den Harrow) and ‘Soda Popinski’ has the kind of oriental electronic feel of Yellow Magic Orchestra, which may be explained by the fact that it is reportedly based around a Nintendo sample. Alas, as well as its slightly-irritating name it is probably the least developed track on the EP and features an extremely annoying vocal sample that all but ruins the track whenever it appears.

However, the best is saved till last with the sparser, funkier, percussion-laden masterpiece that is ‘TWYCE’. Leaner and tighter than the rest of the sonic experiments on show here, it really demonstrates that this band is absolutely full of good ideas. Transferring those ideas into more structured, focused songs will be the next big task for the band, but this solid release establishes Javelin as a band to watch out for in 2010.