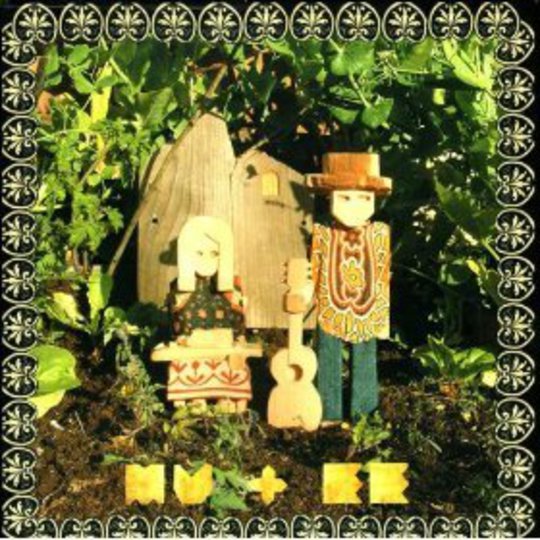 With boho beaut Devandra Barnhart returning with a major label facilitated album of slick Tropicalismo-indebted-pop, whither the rest of the psyche-folk exponents so critically feted and style magazine adored (albeit fleetingly) in the middle of the decade? If the Pagan perversity of Espers or the kosmische-freeform-rock of Sunburned Hand of the Man typified New Wyrd Americana a few years back, recent works by the likes of Hush Arbors and Woods are dealing in a different slipstream of American roots music. We’re talking Classic Rock. Northern California. The Grateful Dead. Getting J Mascis to play on your album. That kind of thing.

Hailing from a solar powered hemp hut in Vermont, MV & EE typify this strand of rustic Neo-Jam-Band music. Both Matt Valentine and Erika Elder have paid their dues, amassing between them an intensely hefty back catalogue of John Fahey esque avant-folk releases on an array of micro-indies such as their own imprint, Child of Microtones. It’s apt then that Barn Nova has found a home on Ecstatic Peace, Thurston Moore’s label and one which shares MV and EE’s belief in a home-baked, communal ideology.

For all their ‘looseness’, MV & EE’s Barn Nova is a concise, awesomely arranged album, succinct in its eight tracks, and surprisingly flab free. Valentine’s voice may croak in that tuneless, sub-Neil Young way so beloved of hippies, but his music is meticulous in its attention to detail – a fuzz bass line here, a scrawl of Mascis guitar there, colouring proceedings in vivid fashion. 'Wandering Nomad' has a title that labours the tree-hugging point but it’s also a gloriously ragged, reverb splattered slab of Crazy Horse rock. 'Get Right Church', sung by Elder, struts along with delectable Haight Ashbury funkiness spliced with whacked-out guitar motifs. It’s when Valentine sings with Elder that things take off even further into to the cosmos. 'Fully Tanked' is a gorgeously wonky acoustic lullaby - "How can I miss you when you never leave?" croons Valentine before Elder joins him on the chorus the same bleary eyed and beautiful way Royal Trux used to flick Vs in the face of The Man. So lovely it’ll make you sigh.