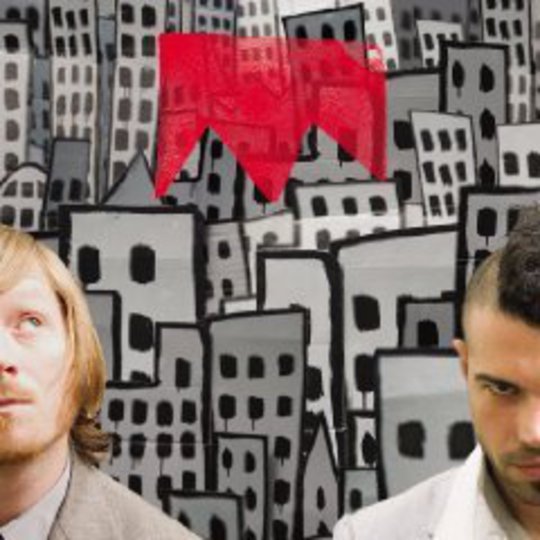 There’s some unintended pathos to the opening track of Crowns Down, the new album from Themselves. Yes, it’s been seven years, and this is a kickass album by anyone’s standards, but did the reputation of Jel, Pedestrian, and DoseOne (as maestros of indie- and/or white- hip hop) actually grow in the interim? In a parallel universe, Adam Drucker didn’t come second in that legendary battle-rhyme contest with Marshall Mathers III, but went on to fame and fortune, and his weird quacking speed-rap brought sophisticated satire to the masses and intelligentsia alike, instead of pimping the romance of poverty, and reclaiming underdog-as-hero status for white trash. Okay, that universe doesn’t make much sense (and 8 Mile remains a feelgood classic, for not having a climactic contest between two white guys), but you’d have hoped that the existential concept-trilogy DoseOne made with Subtle would have sealed his rep. As it happened, Drucker’s marriage ended, and the most representative material on the (absurdly prolific) anticon. label was overlooked in Pitchfork’s Albums of the Decade.

You wouldn’t know any of this, because defiance is writ large over the whole album, with rocking-the-mainstage intensity. Hip-hop conventions like hailing the DJ and hammering the detractors are treated as a sacred rite without any irony or apology for appropriating anyone else’s culture (cf. Sole); they’ve been at it so long, this IS their culture. It’s still anticon. – playful, surreal, literate, allusive – but the morbid self-analysis of cLOUDDEAD has been replaced by a new boldness, reminding you that Public Enemy always said they were a rock band (who happened to use James Brown samples), before hiphop became so smooth, and easy listening. Gone, too, is any trace of lo-fi, without succumbing to the bland stylings that usually entails. This is the hiphop equivalent of all those Eighties revivals that actually work: recreating the shininess and futurism remembered so nostalgically, but being more subtly selective about the synth tones. You can hear Ultramagnetic MCs / Kool Keith, too, but the point is: you’re hearing them as pristine and punchy as you always wanted them to be.

As ever with Themselves, there aren’t really highlights or many changes of pace – it’s full-on, all the time; you don’t get skits between songs, just a second, third or fourth gabbling vocal line within these ten, unconventionally concise songs. ‘Skinning the Drum’ is one of the densest sample-collages, with a snarling Dose aping Chuck D. On the other hand, DoseOne’s namechecked Will Oldham before (just as Why? set a song “in the front row of the Silver Jews show”), and this album’s most revealingly non-hip-hop reference comes in ‘Oversleeping’ (which nabs “you are sleeping… you do not want to believe!” from The Smiths' 'Rubber Ring'). Okay, there are favourites: ‘Deadcatclear’ is Dose’s evocation of decomposition, re-visiting morbid images he’s dropped throughout his albums (way back to Circle, ten years ago). The sample tells you “the death of a relative can be a powerful learning experience for a teenager”. In other words, there are layers and layers here, if you want to dig for meanings beneath the overwhelming emotions; musically, the songs have new layers to discover each time – that weird and crystalline synth part in the same song is as otherworldly as the heavily processed sample Radiohead wove through Kid A to suggest recurrent glimpses of Hell. Without letting up for a minute, the album concludes with The Notwist's Markus Acher and Subtle's Jordan Dalrymple (now a member of 13 & God along with Themselves and Acher) reuniting for ‘Gold Teeth Will Roll’ - all the players lining up to take on the world one more time.