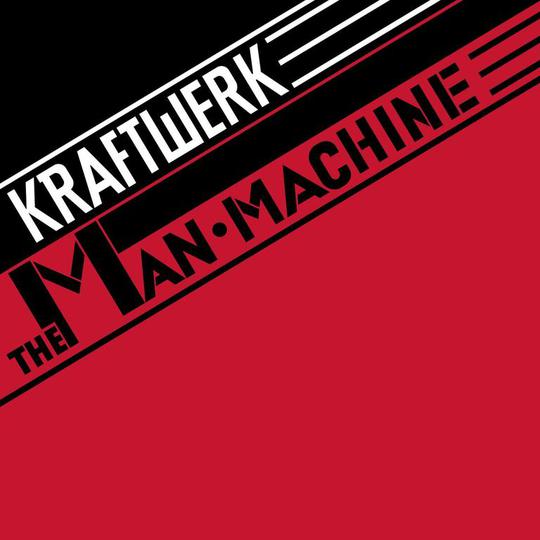 Viewed with the generous and neatening benefits of hindsight, while Kraftwerk’s sixth album, Trans-Europe Express, mapped out the blueprint for electro and techno, their seventh, The Man-Machine, secured what Simon Reynolds has called the group’s ‘ancestral centrality’ for synthpop. As such, the only bad thing that could be said about it is that it was indirecly responsible for the release of thousands of tonnes of New Romantic haircut-enabling chlorofluorocarbons into the atmosphere.

Malignant environmental impacts aside, The Man-Machine is a ruthlessly precision-tooled piece of work. Its pointillist attention to detail is the reason why it sounds every bit as impactful now in remastered form as it must have done in 1978. It’s easy to forget that the laptop I’m writing this on today could outstrip the then-awesome power of band’s Kling Klang studio (the 'Mütterschiff', or ‘mothership’, as Ralf Hütter once described it). But prior to the advent of MIDI in 1982, the methods of syncing synthesisers to computers, drum machines and sequencers were primitive, and to make electronic music as tight and sharp as that contained within the blood-red and ebony black sleeve of The Man-Machine was a monumental achievement in its own right, even before you factor in the presence of some of the most sublime pop melodies of the decade. As Ian Craig Marsh said of The Human League’s first album, 1979’s Reproduction , “it sounded weak next to Moroder and Kraftwerk. We wanted our records to be more brutal on the rhythmic level, but at that point the engineers and producers available in Britain weren’t up to it.”

Staying on the subject of sound, a couple of posters have rightly questioned my lack of discussion about the quality of the remastering of these albums. And I agree, it does seem a little perverse. I gave a kind of umbrella judgement in the introduction to my Autobahn review, but I'll admit that talking about the music in that audiophiliac sound design kind of way isn't my forte. There's a small fact I've held back when explaining myself, though; a little something I wanted to unveil at the last moment: The Man-Machine remaster is a total revelation and I'm sorry, but if you've already got it then you're just going to have to go and get it again. The basslines are warmer, the pulses more impactful, the spaces between discrete elements cleaner, the bleeps...well, bleepier. You'll have to go elsewhere for a more in-depth analysis than that, but believe me when I say that this album has never sounded so good.

So, The Man-Machine is even more rhythmically brutal and beautiful than before, and is also Kraftwerk’s most consistently catchy album. Not only in terms of its most famous tracks: the proto-electro snap of ‘The Robots’ and the peerless, can’t-get-it-out-of-your-head Euro-funk of ‘The Model’, which was so far ahead of its time that it would go on to become a UK number one three years later. There's also the often-covered (and butchered – yes, Simple Minds OMD and U2, I’m looking at you) ‘Neon Lights’ and the album’s title track, 'The Man-Machine', which taken together make it one of the undisputed high-water marks of manufactured pop. As such it stands as a monument to Ralf Hütter’s idealised version of what Kraftwerk’s music should be: “We are playing the machines, the machines play us, it is really the exchange and the friendship we have with the musical machines which make us build a new music.”

‘A new music’ has rarely been such so apposite a description: The Man-Machine is so fresh that it seems as though it’s just emerged glistening from a digital womb. Kraftwerk’s prodigious talent for simple, minimal melody was intact, but it is buttressed here by an even more graceful sweep to the music’s atmospheres. The tweaked, arcing synth lines of ‘Spacelab’ - the only time this supposedly most futuristic of bands have selected space as the subject for a song - peel past like shooting stars; the vocoded vocals ache with longing. This paradoxical emotion, this fauna sprouting from circuit boards and supposedly sterile machinery, shows the true meaning of the album title’s blend of the organic human with the inanimate machine.

This uncommon blend reaches its apex on ‘Neon Lights’. With pinpricks of warmly glowing synth tones rushing through it like a warm, surging tide of endorphins, this is yet another example of a Kraftwerk record – like ‘Autobahn’, ‘Europe Endless’ and ‘Trans-Europe Express’ – that in the course of describing a journey comes to convey a weightless endlessness. For three minutes it’s a ballad about travelling through a strip-lit city, its melody verging on that of a lounge-act. Ralf Hütter’s vocal delivery is virtually a croon. Then, for another six, it shifts into something else entirely: a flowing electro-symphony of perfect overlapping repetitions that stands as one of the most sublime passages of music Kraftwerk have ever recorded.

On its release the artwork for The Man-Machine, depicting the band standing on a staircase wearing paramilitary-style red shirts and black ties, caused controversy. Inspired by the Russian constructivist El Lissitzky, it is arguably the most complex image in their carefully considered visual ouevre. It suggests a reaching out, as is true elsewhere in the band’s work, for the utopian dream of a modernist German aesthetic; one that hadn’t been made problematic, if not irrevocably perverted, by the Nazis. Yet at the same time it employs National Socialist colours, which in the late-Seventies were in the process of being ironically appropriated by German artists. Meanwhile the red shirts, the borrowings from constructivist art and the position of the band’s faces, gazing to the east, suggests an acknowledgement, if not exactly an engagement, with communism. Further, it is also an acknowledgement of the dark side of the marriage of man and machine implied by and ultimately surpassed by the title track, which rejects the Nietzschean conception of the Übermensch, hijacked by fascism, and instead celebrates the positive results of combining human warmth with machine precision in, as Hütter’s quote above has it, a spirit of 'exchange and...friendship'.

By referencing constructivist art the cover also plays a favourite Kraftwerk game of pointing to the future by way of the past. Consider the Thirties wireless on the original cover of Radio-Activity, ‘Trans-Europe Express’s glorification of the modern ideal of a steam-age mode of transportation, the Fritz Lang-indebted ‘Metropolis’ or the hymning of “Parks, hotels and palaces” on ‘Europe Endless’. For a band whose music demands a consideration of the future it in significant part created, Kraftwerk are nevertheless intimately concerned with looking back at the past even as they speed away from it.