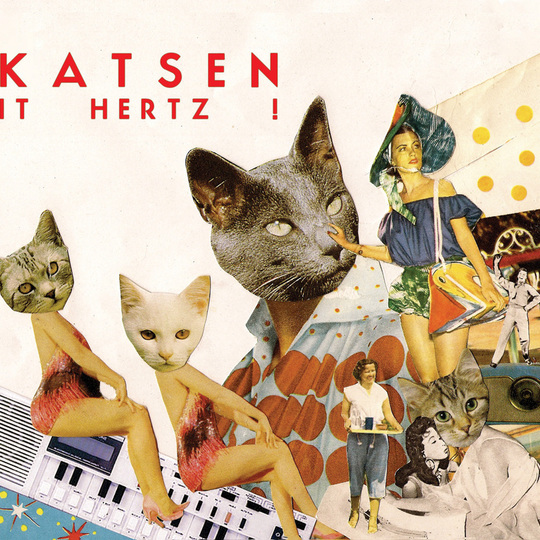 You think the cover to It Hertz! is pretty messed up. And you're right. But be warned, this is just the beginning. It folds out into a full on assault on the senses, a collage of cats' heads on girls' bodies, superstars of the Fifties (Curtis/Taylor/Newman/Lancaster), an accordion, more cats, the Eiffel tower, leopardskin print, keyboards, lipstick, a trench coated cat detective wearing a fez... I'd best stop there before I have a seizure. Frankly, it's one of the the most batshit insane covers you'll ever see. It will fry your mind, and I urge you to examine it in it's full glory should you ever get the chance.

There's no way the music could match the impact the cover makes, but Brighton-based boy girl electro-pop duo Katsen are decent enough to give it a go. Opening with 'Let's Build a City', it's obvious via smooth waves of Casiotone, beeps, blips and crisp drum sounds that Katsen's aesthetic is drawn from crunchy 8-bit and smooth Eighties synth pop. And the combination works most of the time, most notably on their straight, reverent cover of The Passions new-wave-classic 'I'm in Love With a German Film Star'. When things start to go off piste, there's usually a redeeming quality to the songs to make them worthwhile. 'I'm a Doctor' is a simplistic and appealing story, but there isn't much to the song. It's made (or saved, depending on whether you see the glass as half empty) by a decaying sample of someone saying "Not wellllll". Their Pixies cover, 'Cactus', is more plaintive than the original, but lacks the meat on the bones that a clanging guitar offers. It feels honest, but slight.

These plusses are balanced out by the ZettaOmegaFail of 'Island in an Island'. Sample lyric: "He's an island in an island in an island, with a camera taking photos of a photograph". It's a looping mantra, a tautological feast. There's a number of ways you could interpret a lyric like that. Could it be a simplistic look at the reflexive nature of photography? A veiled reference to music criticism? A nod to the idea that a moment can never truly be experienced except when lived first hand? As the lyrics circle and the delivery grows more terse, the realisation dawns that it doesn't really matter. The sound is straight from the Shoreditch of old, sounding like it's been knocked together by a bunch of arch Hoxton chimps with Garageband and a G5. Ostensibly, when the naiveté of this duo is taken away, so is their charm.

The title track is a well constructed instrumental held together by a throbbing early Cure bassline (from an actual bass guitar), with what sounds like a half-cut Kraftwerk trying to get a song done in one take over the top. It closes strong: 'Constellation' and 'Where Nobody Can Find Us' sound like the sort of singles that would have sneaked into the top 100 for a week and made the Festive Fifty in 1984. It closes with another excellent Kraftwerk nod in 'Florian'. A paean of fan love, genuine and very pretty, and easily the best thing on here, it shows Katsen as ones to watch. It Hertz! isn't a perfect album, but then I doubt it was created with perfection in mind, and the final few tracks are a pointer to where Katsen could be going. It's good enough, and it shows promise. Perfect debut albums are so 2004, anyway.