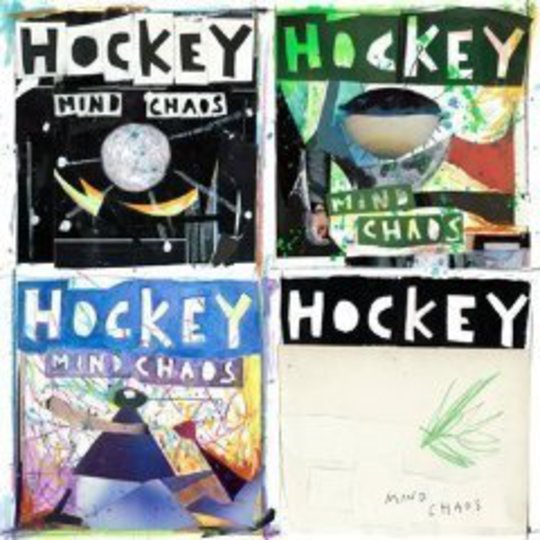 Judging bands on the way they look: we all do it. I remember the first time I saw Hockey. It was on some TV station in a crowded living room where I could barely hear the music, but what I could make out was a group of fashionably dressed young men, one of whom was wearing a headband. Based purely on headgear, my conclusion there and then was that they were opportunistic MGMT copyists. Later, however, more promising rumours started to filter through: they sounded like the The Strokes produced by James Murphy; they'd completed tours with Friendly Fires and Passion Pit; they'd received words of praise from Dave Allen of Gang of Four and had even recorded with former Talking Head/Modern Lover Jerry Harrison. It would of course be equally as misguided to judge a band purely on the quality of their various associates. Hockey are (as you would most likely expect) not trailblazers in the mould of Gang of Four or Talking Heads, although they bear the influence of both bands. Neither are they just talentless, opportunistic fashionistas. To put it in the simplest terms, Hockey are a decent Eighties indebted guitar-pop band; nothing more, nothing less.

While it may not be true that every track on Mind Chaos is a potential single, it does come pretty close with the already lifted tracks particular standouts. 'Too Fake's verses display Hockey's LCD-informed dance-rock influence as all distorted bass riffage, lithe programmed percussion and pounding acoustic drums. However, the song is really all about the swaggering chorus, with frontman Ben Grubin boasting about having "Too much soul for the world" amidst crunching guitar and glistening synth. Startlingly original it isn't, but bloody catchy it is.

The buoyantly funky 'Learn to Lose' throws some pretty standard punk-funk shapes, but crafts a fantastic pop song out of it sounding like a more blustery version of Hot Hot Heat circa-Elevator. Recent single 'Song Away' initially sounds like something of an art-rock callout with its driving new wave guitars which again recall Talking Heads (this time 'Wild Wild Life') and its opening line ("Make me a deal") a reference to Roxy Music's 'Virginia Plain'. The punchy rhythms and wordy verses give way to an anthemic optimism in the chorus, which is oddly stirring in its assertion that "tomorrow's just a song away". It is also the song in which Hockey most clearly nail their colours to the mast with Grubin's declaration that he just wants to "write a truthful song over an Eighties groove".

Naturally not every song on the album sustains the high standard of power-pop infectiousness and there are moments where Hockey sound overstretched. Second track '3am Spanish' is heavily indebted to James Murphy's lot yet again and has enough rhythmic dynamism to get your feet tapping, but is bereft of the melodic charms of the album's best tracks. 'Curse This City' almost fails on the same grounds, but is at least more musically adventurous (if a little scattershot) with Grubin almost rapping over a sampled-string drenched section, which is followed by a crunching funk guitar workout before the rhythm section grooves its way to the song's conclusion. Elsewhere the choruses of 'Preacher' and 'Put the Game Down' are respectively let down by irritating bop-along piano and dated soft-rock guitars which come dangerously close to the Baywatch theme.

On 'Wanna Be Black', another one of Mind Chaos' strongest tracks, Hockey boast "everybody's making dance music too, but we started in 2002". The truth is that Hockey are making 2002-style dance-rock/punk-funk. They do little to advance on the template, but at their best they produce some thrilling pop music, and while failing to create a consistently brilliant album, tracks like 'Song Away', 'Too Fake' and 'Learn To Lose' sound good in any year.