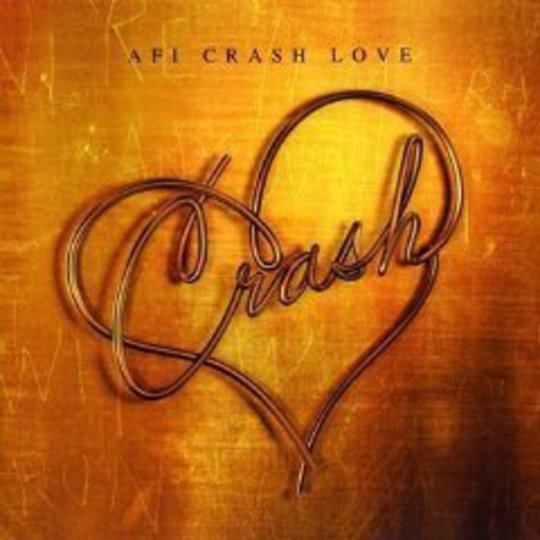 When you try and neuter a cat it puts up a fight. A guitar, being only in its material reality a carefully wrought piece of wood with some simple electronics wired in, cannot do the same. It acquiesces as humbly as a drugged castrato, with his watering eyes on a shot at the mainstream. The fall of the machine that Guthrie had inscribed with the power to kill fascists, and that Cash had used to incite fire in the victims of the state, is one from height. No respect can be given to something so massively undone. It is inhuman to feel the kind of disgust Nietzsche held for the saint in the woods, or a Tory voter for a tramp relaxing into a Special Brew-induced self-watering. Yet AFI think fit to create that emotion in anyone that still might believe in a guitar.

Guitar Hero aside, the sounds of AFI's guitars have always borne the traces of the screamo/melodic hardcore confluence that they picked up over half-a-decade ago. When coming of age in mid-Nineties Southern California a punk act had choices. There were DC-inflected bands like Jawbreaker and Drive Like Jehu creating raw and intricate licks. Queercore had kicked off, the jagged Byrds of Pansy Division and the psychobilly rasp of Tribe 8 were sounding as new as their sexual politics. Issuing forth from Berkeley were melodic strains and lighter angles of Greenday and the hardcore turncoats NOFX. Failing to choose any of these, instead plumping for a sort of MOR Misfits for their first clutch of releases, AFI finally decided to address their lack of distinction and go a bit darkwave for their 1999 album Black Sails in the Sunset, adopting goth pseudo-literacy derived from The Cure, Bauhaus and Morrissey and the use of brooding electronics which culminated in 2006's epically underwhelming Decemberunderground. Along the way the guitars got increasingly polished: drop-d's lost their weight, palm-mutes were drenched in enough fx to make nu metaller blush, and now with the synths apparently ditched, Crash Love sees the culmination of all that disgrace in a collection of sounds that fall somewhere between P.O.D. and a fart that's been trapped in a turbo-fx pedal for ten years.

But while their darkwave component languishes, it is apparent from the opening track that A Fire Inside (oh shutthefuckup), the band that once set Baudelaire to music, are going to be keeping the Morrisseyism-shorthand-for-literacy vocal quirk, which permeates vocalist Davey Havok's contribution to this album. “I tear out my soul / for you my dear / you my dear.” he croons on 'Torch Song'. And if Mozza had not had the love of Wilde on his side, but rather that of some over-eyelinered adolescent writing clumsy strings of inchoate metaphors in his livejournal, breaking only to reapply fake blood to his smooth balls, those are the kind of lyrics he would have produced. Oh dear, my dear.

And failing further in their remit they really cannot evoke or address pain. 'Medicate', a run of the mill exposition of being the subject of mental health institutions, contains the poetic and inspiring line “we're running towards death.” Emotional and physic pains are evinced in the way of the chancer who, while pretending to be a former professional footballer, still adopts a sly limp when chatting up women in provincial clubs. Or the hypochondriac great auntie who never shuts up about phantom aches amidst her mirror-pictures of Jesus. It's all bullshit, who's going to believe it? It's at the safest of removes; emote by rote, numbness by numbers.

'Transmission' by the Pistols was a dirty paean to the violence of communication – what the airwaves might crackle with if hijacked by the unexpurgated filth-jockeys of punk. At the risk of being all be too pat; 'End Transmission' could be read as indicative of the curtailing of that kind of promise: a big functional Placebo for the midnight slot on MTV2. So radio-friendly it's fellating the receiver, and oblivious to the irony of lyrics painting broken radios playing Suicide.

'Sacrilege' allows their emo tendencies to run amok. “Oh please believe” Havok implores in the tone of someone who'd never learned to persuade anyone of anything, choosing instead to communicate their wants and needs in the manner of an overtired toddler. You can imagine them shopping in Argos weenily crooning over the counter “toassstteerrr, toaassssteerrr.” 'Sorry sir, is that the Breville or the twin mechanism Russell Hobbs? Your ticket appears to be smudged with fake blood.' Falling on their knees with a faux-pained expression:“Toasstterrrr. I dieeee for youuuu.” 'Sorry... is your mother with you?' “I bllleeeed my fake blood on the toastttt for you” 'Yeah okay. Security.'

To my ears AFI are almost a stadium band, with all the pretensions to massive uplifting sheen, but somehow they just fall short (a fall they would presumably attribute to the rawness of their now-fictive hardcore roots) and end up sounding provincial. A bit like Yellowcard at a village fete, partially obscured by the coconut stand, second billing to Alan Partridge. Personally if I was curating a village fête, I wouldn't even ask these guys to judge the vegetable competition They'd only triumphantly brandish the smoothest looking parsnip, the most bland chilli, and declare them the most dark product of visceral madam nature. Book the Misfits and you'd trust Glen Danzig to choose a vegetable that looked like a cock and beat the vicar to death with it – you get the feeling AFI would be more likely to sip bottled water and talk boringly and politely to your mum and dad about falling record sales.

Prior to the recording of this album AFI's marketing drones ran a YouTube competition, asking fans to post videos about themselves in order to impress the band. For my own submission, I knew that two minutes of me dressed in nothing but a wristful of leather and plastic bracelets, a studded belt and boutique keychain running from my limp cock to my yellowing balls, surfacing glistening from a swimming pool with perfect dyed hair, gripping a Pepsi can in one hand and a Guitar Hero controller in the other - would constitute an image too gritty, too political, too punk for AFI.

So instead I filmed one of my own turds in slo-mo, epically breaking the surface of the water, proudly pushing its turtlehead up toward the light beyond the bowl. A little blood around the edges, only to signify the cancer of soft-rock guitar in what should be the healthy churning bowels of punk music. I used fake blood, nothing more serious than that.