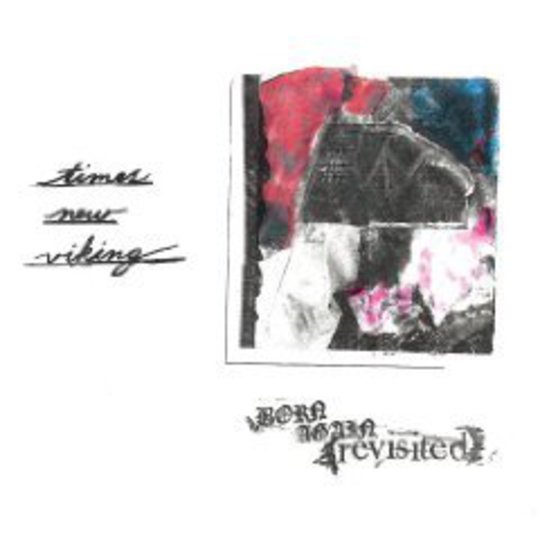 Last May, I finally caught Times New Viking at Brighton’s Great Escape Festival… specifically, playing the same dingey bar in Hove they’d played the year before. Granted, it was only a mile or so from the city centre and the bigger shinier venues, but it was a long way to walk alone at night – along the sea-front with a gale blowing – to get to a place where the natives were a mixture of rockabilly, manual labourer, and Lenny from Of Mice and Men (I don’t mean each of them were a mixture, just this one pituitary giant, in braces, staring at me). It felt like being on TNV’s home turf.

The band didn’t disappoint. Individually, personally, they had a grit, and a grubbiness, and packed a punch in each chord struck, or Beat Happening-simple trill on the keyboard. It seemed like some kind of achievement to have NOT been upgraded, nor embraced to the (pigeonchested) bosom of indiedom. In a world where authenticity is all, expectations are high for Born Again Revisited… so high, in fact, that the press release is accompanied by 'a love letter' from Mark Bowen, of Wichita Recordings, that (for music geeks of a certain age) might recall Alan McGee’s full-page ad in the papers, to announce that the best live bands he’d ever seen in his life were The Sex Pistols, Oasis, and Three Colours Red.

Okay… skip to the end. Net impression: it sounds like TNV are trying to recreate the charm of listening to a chewed-to-death dub-of-a-dub-of-a-dub of some teenagers in a basement, yelling slogans about what they want, and when they want it, in their little world of wherever. They don’t just want you to hear them, they want you to YEARN to hear and understand them… in spite of the fact there are few intelligible stories, and choruses more like audience heckles – distortion clawing back at least 50 per cent of the words into strangled sound, with precious little nuance.

It makes sense that TNV would be a fantasy band for so many journalists (and label-owners), projecting their ideals of integrity and devil-may-care, no-prisoners bravado. Thing is, even in the world(s) of lo-fi, noise, outsider music, and Sixties-throwback garage complete with mini-organs and dirty guitars, it’s not hard to say what makes for greatness, and this ain’t it… yet. There’s a fine, brazenly Stooges-like opener in ‘Martin Luther King Day’, and a joyously amateur anthem in penultimate track ‘Move to California’ (freely available online), and various highlights in between (like ‘2/11 Don’t Forget’, which has a cute 7-note organ riff so endearingly dumb and retro-sounding that it simultaneously evokes The Horrors, dEUS, and Jonathan Fire*Eater, who’ve all used it). None of the songs outstay their welcome, and it’s sequenced to alternate between trashy and cute songs, with male and female vocals (not always trashy and cute, respectively). Problem is, there’s also a low-level hostility to the listener – there’s not enough we’re allowed to understand – or maybe just an unrefined sense of how much crackle, feedback, and distortion actually make a rudimentary riff or vocal interesting.

Anyhow. Think Beat Happening on Crashing Through; Young Marble Giants recording under a flightpath; the Loewenstein & Gaffney (but not Barlow) material on early Sebadoh; maybe even the records that Jandek and Daniel Johnston made with pick-up bands, in the mid-Eighties (and somehow got way more mysterious / evocative / just plain squelchy sounds out of their equipment). TNV’s longstanding allegiance to (fellow Ohio-natives) Guided by Voices is a bit misleading – you have to go as far back as Bee Thousand to find any GBV songs as basic and trashy as TNV. Don't get me wrong, this isn't an Emperor's New Clothes review, just an expression of concern: there aren't enough reasons for casual listeners to come back to this.