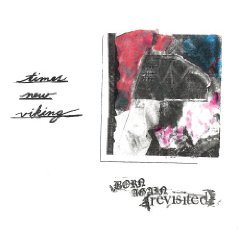 Net impression: it sounds like TNV are trying to recreate the charm of listening to a chewed-to-death dub-of-a-dub-of-a-dub of some teenagers in a basement, yelling slogans about what they want, and when they want it, in their little world of wherever. »

a pox on those who claim the venerable vhs format is dead; in fact, times new viking delivered the master recordings to their new album 'born again revisited' on a video home system cassette. however their 2nd matador album (and 4th overall) features 'higher fidelity'. much has been made in the press of late of cheap trick's attempts to steal adam, beth and jared's thunder by releasing their upteenth comeback album on 8-track, but with all due respect to the state fair fixtures rockford's finest, it's been a generation since they've come up with anything as provocative as 'born again revisited's 'move to california' or 'no time no hope'. while times new viking continue to make-it-look-easy, we can assure you it's anything but that. a cursory glance at the american rock underground reveals a landscape littered with well-intentioned but vastly inferior bands who've caught the lo-fi bug ; times new viking are well advised to disavow responsibility for the epidemic, but whoever the guilty party is, the ferocity of times new viking's shows and their sheer quality of their songwriting should be enough to win them a presidential pardon, not unlike the one 'born again' author chuck colson never quite received.
description from www.roughtrade.com