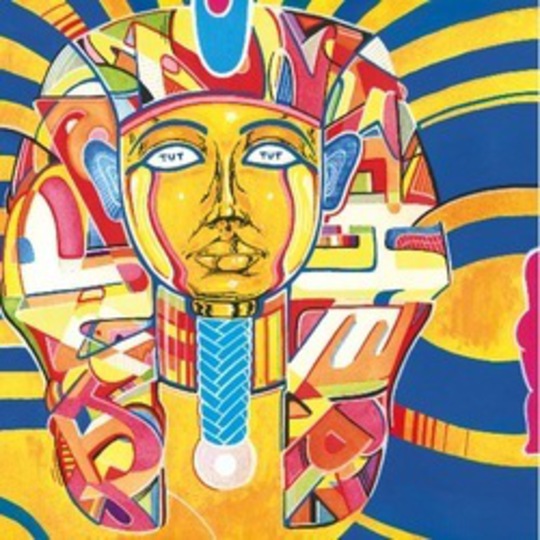 Japanther make a glorious racket, the sound of the knockabout sugary melodies of new-school punk and ska colliding with the lo-fi dirtiness of a previous generation’s approximation of guitar-based rebellion. The tracks all clock in around the two minute mark, little teases that tongue kiss and hint like they might use their hands too, but never stick around long enough for that. Romance of one kind or another is never far from the surface. When, on ‘The Dirge’, Ian Vanek sings “I love you no matter where you spend the night, you can always come back to me, because I’m nothing and you are everything”, it's not a disappointing slide into self-pitying emo, more the mantra of a kid high on glue and unrequited love, whose heart caves in a little every time the object of his affections gives him the time of day. If they were in a John Hughes film, Japanther would definitely be the leather-clad punk brats who somehow manage to corrupt the homecoming queen before the credits roll. Everything about Japanther is fun, and fast, including the band's prolific output in the eight years since their formation as students of the Pratt Institute in New York.

Everything that is, apart from the sections of new album Tut Tut, Now Shake Ya Butt (finally getting a proper UK release) which feature poetry readings from Crass drummer Penny Rimbaud. He hams it up enjoyably on the two poems he contributes, ‘Africa Seems So Far Away’ and ‘I Thee Indigene’, but they are so long that they drag the focus away from the chaotic blasts of Japanther’s revelling-in-stupidity riffs. The surreal verses indulge in wild esotericism, yet have an opaque thread running through them, like the kind of dreams where unconnected events and figures have an unstated yet implicit continuity and logic.

The collaborations with Rimbaud and Spank Rock on Tut Tut… are admirable for their desire to shake things up and avoid the possibility of their rumbling two minute sugar rush getting stale, but they just don’t click in the same way as the efforts of their hosts. Spank Rock’s rap about getting stopped at an airport for daring to be black and wear jewellery fares better than Rimbaud’s weirdness, but it seems strange to have one of the most libidinous MCs around making a political track on an album which seems dedicated to instinct rather than intellect.

But in any case, it doesn't really matter. Japanther eat, sleep and shit the instable charm of youth, the inane magical pleasure of three power chords strung together to document love, depression, bike spills and sex. The sheer sincerity of words backing up the simple melodies of tracks like 'Um Like Yer Smile Is Totally Ruling Me Right Now' means they couldn’t sound dull to anyone who has ever had a heart, or ears - “to me punk rock means dirt it means bikes not cars, to me it means being sad when you can’t see the stars… it's not just a dream to me.” The Benzedrine-like honesty of Japanther’s lyrics, half sung, half shouted to try and keep up with a relentless rhythm section, have a spiritual heritage drawing on the drink-fuelled disaster of Mercury Rev circa ‘Bronx Cheer’, but the freshness and sheer unselfconscious joie de vivre of the duo is as close to Dan Deacon as anything else. Ditch the collaborators, and maybe next time out Japanther could lay claim to the mantle of Guided By Voices.