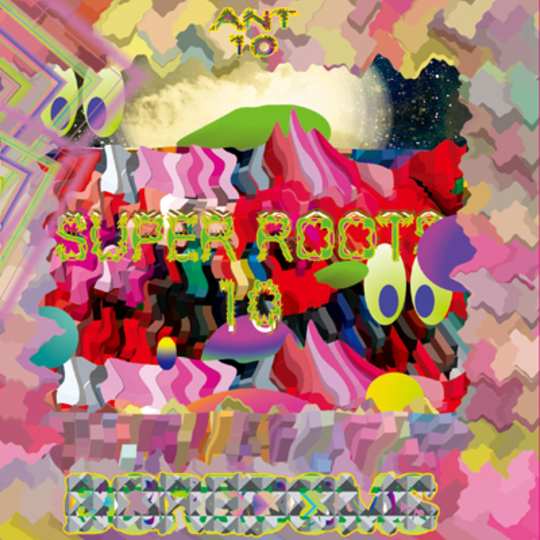 There are probably people out there, other than Boredoms supremo Yamantaka Eye, that reckon they can trace some sort of common thread through the Japanese band’s highly abstruse Super Roots series of EPs, which began in 1993 and leaps into double figures with this four-tracker. Given that this series has seen them froghop from their cut-up noiserock Nineties incarnation to an hour-long storm of total guitar fury to quasi-covers of Mekons songs and kids’ TV show themes to Super Roots 10, one joyful jam remixed multiple times in a danceable fashion, that would strike me as guesswork, but whatevs. This instalment came out in Japan on CD early this year and sold out with inevitable immediacy. Thrill Jockey have finally issued it for the rest of the world, but it’s only on vinyl – two 45 rpm 12-inches, one track per side.

If you can get your hands on a copy of the CD, it begins with 38 seconds of apologetic sorry-it’s-just-warming-up drone by the name of ‘Super Rooy’, and a remix by DJ Finger Hat, who is either Eye himself or someone who is making his musical debut here and has never been on the internet before. Otherwise, we begin with ‘Ant 10’: the source of the three remixes which follow it, it runs to nine and a half minutes and sounds like if serotonin made a noise. Starting with sustained chanting from (presumably) Eye – it sounds like he’s saying “UNTIIIIIIILLLLLLLLL”, although I wouldn’t swear to it – this gives way to joyously loose-wristed drumming, in some way reminding this listener of Fugazi’s Brendan Canty helming a Hare Krishna percussion circle, psychedelic guitar solos played on Eighties-sounding synths and perhaps most arrestingly, an incredibly lovely arpeggio that sounds like waterfalls and clovery fields and, uh, early Nintendo game music. Around the seven and a half-minute mark, the whole implodes and skyward synth drone signals the drums devolving into a more rigid, militaristic stomp, before sticks are laid down for 30 seconds of vocal gibberish. And that’s it. It takes a good few listens, and pretty immersed ones at that, before the overweening hyperbole I’ve just chatted starts to feel justified, but ‘Ant 10’ instills little but pure positivity in me as regards the direction the Boredoms have taken of late (certainly more than Super Roots 9, a live recording of a choir-utilising 2004 show which came out last year in the UK – and I liked that one just fine).

Altz is a Japanese chap who’s remixed the Boredoms previously and had a 12-inch on DFA a couple of years back, and who is assigned two remixes here. The first he renames ‘Estereo 10’ and, possibly appropriately for someone who has Mungolian Jetset and Prins Thomas as his top Myspace friends, feels more like an edit than a remix, beefing up the drums, spinning out the melody and retaining the a capella ending. Altz’s second bite at the cherry, titled the ‘Mineral Dub Break’ and Super Roots 10’s closing track, highlights Eye’s vocals and makes him sound vaguely operatic, which is quite neat; it still feels a shade reverential for the most part, although there are certain parts where you feel he had a house night’s dancefloor in mind.

Not really the sort of action that’s spawned Boredoms fanboys who wear neon face paint to the band’s shows and own shelves of Japan-only CD oddities as long as your arm. Good thing, then, that Norway’s epic disco iconoclast Lindstrøm hotfoots it down the mountain to save us. I use the world ‘genius’ sparingly, as they say, but I’d consider Lindstrøm… very, very talented. Much as things like last year’s kosmische monolith Where You Go I Go Too was great and all, it’s reimaginings like this that really show you how bright the bulb in his brain burns. The original’s huge drums are compressed to sound like they’re taken from a vintage deep house track; minute elements of the central melody and those wiggy synth riffs are isolated and expanded, and at about eight minutes 30 the whole fucked-up conga line starts grooving to what I insist is the world’s first Scando-Asian psychedelic NYC go-go track. It’s the best remix I’ve heard in a friggin’ age, and a considerably better example of a Japanese-Norwegian alliance than the latter selling the byproducts of slaughtered whales to the former.

Okay then. I’ve just dropped a load, in the ejaculatory prose sense, on two of Super Roots 10’s tracks. Do said tracks justify you dropping a load, in the financial transaction sense, on the whole package? Fuck it – yeah they do. It totals 20 minutes of mesmeric, shapeshifting lizard music and you basically won’t hear anything else like it in 2009. A shame about the minor misfires on the other two sides, but they’re not why you’re about to look down and see the score you do.