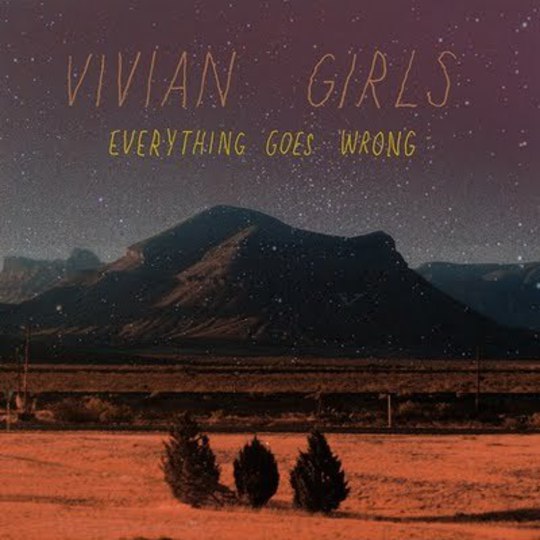 The phrase “if it ain’t broke don’t fix it” doesn’t really tend to apply too much to music. There’s the perennial issue of artists “challenging themselves” and “continuing to grow” with those who seem to reject change and progression broadsided by harsh words, in many cases entirely fairly. With the harmonious hardcore that made up Vivian Girls’ eponymous LP there never was that feeling. Not for a minute...which, coincidentally, was about the length of most of their songs. In any case, there was certainly little broken in their one-and-a-half minute battle between three-part harmony and assaulting guitars and, mercifully, they’ve decided not to mess around with their formula much, if at all. Sure, there’s now a whole eight songs of 2:30 or longer as opposed to two previously but they’ve hardly foot-stomped into Fucked Up territory with the song lengths.

Everything Goes Wrong is no record for audiophiles but, sure, you expected that. It almost goes without saying, much like the equally primitive guitar solos, use of punky power chords and beats. This is a record where somehow every single fuzzy note and lyric sounds infinitely better on, say, shoddy laptop speakers than it does through any high-quality headphones or speaker systems. This, for me, is exactly how things should because it is, after all, the sort of music which should be bursting out of dysfunctional PAs in thousands of sweatbox clubs across the world. Drumbeats melt into basslines; the guitar in turn does the same with the vocals, altogether making a beautiful, cacophonous noise perched precariously atop trademark harmonies. There’s no striking differences or additions from the first to the current but getting what we wanted here works just fine – like the time as a kid when you knew you were getting a SNES, N64 or whatever for Christmas. You expected it, but it didn’t make it any less fun to whack out to Super Mario Kart in your pyjamas all day until at least January 18.

On the point of harmonies, there’s probably fewer this time round but the product of this is that when they do appear they’re greater than before. ‘When I’m Gone’ sees new harmonic heights scaled and is another example of the Vivian Girls’ propensity to produce perfect pop craft with such simplicity. The sweet-as-a-cherry vocals are evocative of the ‘60s girl group thing and there’s even a variance in dynamics and tempo found. ‘Tension’ slowly and slackly chugs along as a ball of emerging distortion and angst whilst it's sandwiched between the swirling urgency of ‘The Desert’ and the beefed-up echo chamber and rapidity of ‘Survival’. Lyrics may be hard to decipher most of the time but there’s heartbreak here, for sure. That’s the thing it’s easy to forget with Vivian Girls, amongst all the clashing chords and striking of skins: these girls have some pretty killer lines. ‘The End’ takes the lyric “You are the case of all my sorrows / you don’t have a lot to say” and wraps it around guitar lines matching the mood before bursting but even that is beaten by the relatively funereal finisher of ‘Before I Start To Cry’ which is a bona fide ballad, and a rather great one, too.

Vivian Girls are gathering pace and it’s probably best that we let them get on with it. This is not a record where it’s over before it’s started and such the feeling of euphoria isn't as great as before. Though it’s not a carbon copy of Vivian Girls in the same way the Ramones basically had three songs spread across 14 albums – the process is the same and the end product very similar, but not identical. It’s also not a record where you’re instantly gripped round the neck, it’s more a gradual clamping before nails start to dig deep into the skin. There may be obvious limitations in what Vivian Girls do but Everything Goes Wrong should do more than enough to convince that we can expect a bit more guitar-pop brilliance yet.