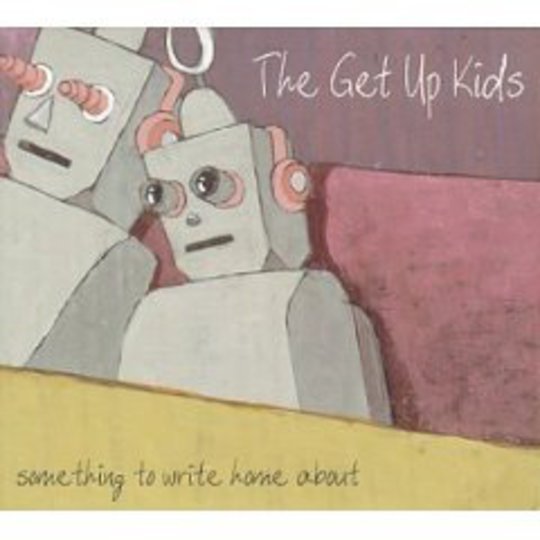 As far as genres go, that of emo/(post-) hardcore/punk/emotional post-hardcore punk is so littered with discrepancy and argument as to be impossible to contemplate with any degree of accuracy. So let’s not. Let’s not vociferously consider what, exactly, constitutes an ‘emo’ band – or rue its modern status as some kind of vaguely alternative catch-all noun – instead, let’s renounce the whole redundant term once and for all, shall we? Yes? Good.

“What became of everyone I used to know? / Where did our respectable convictions go? / Your words don’t match the story that your actions show / But what do I know?”

On a buzz-saw barrage of guitars, synth and drums, Something To Write Home About makes its entrance. And what an entrance it is: a dizzying blast of riffs over which Matt Pryor dispenses said searching lyrics. In the subsequent ‘Action and Action’, fretboards are slid over with abandon and the drums hold everything together beautifully while James Dewees’ synth (a relatively recent addition to the band at this point) creeps ever so slightly closer to the fore. Disillusionment is the key theme explored, but so eloquently and enthusiastically wrought that these songs can’t help but raise a smile. “If the world is ending, then we toast to it”, indeed.

It’s as if The Get Up Kids stumbled across some kind of secret formula while making this album. I could wax lyrical about the myriad hooks spread throughout (the cascading tumble of ‘Ten Minutes’; the muted down-strikes of ‘My Apology’; the unassailable triumph of simplicity that is ‘I’m A Loner Dottie, A Rebel’), but it’d get us nowhere, really. So I repeat: a secret formula. Couple this with the vivacity with which the songs are relayed, take into account how brilliantly the band play off each other, throw in a healthy dose of longing and you’re halfway there in terms of understanding its appeal.

If the lenses through which I view the record are admittedly a smidgen rosy-hued, it’s worth pointing out the likes of ‘Out Of Reach’, ‘Valentine’ and ‘I’ll Catch You’ sound as sweetly naïve now as they did ten years ago – no more, no less. Given the band’s sizeable legacy (albeit one they’ve notably sought distance from of late) it’s a pleasure to see Vagrant pay it due reverence with this tenth anniversary digipack, which comprises a DVD, download card (enabling access to early demos of the songs), and glossy, photo-packed sleeve.

Of the DVD’s archive footage, seeing a group of girls heart the “Ghetto Kids” outside a show is a highlight, as are the snippets of milestone shows that pop up throughout (Ryan Pope’s first on drums for example, or indeed the band’s second ever). Although the video for ‘Action And Action’ remains endearingly rubbish, the best thing here is undoubtedly the album-as-a-live show, recorded earlier this year in the band’s hometown of Lawrence, Kansas City. Towards the end of the set, Jim Suptic thanks the crowd with a touching aside: “not in a million years did I think people actually still cared as much as you guys… care, so thank you. It means a lot to us”.

At their best, The Get Up Kids don’t so much transcend the pop-punk template as they do command it. Guitar-based sugar-rushes of melody and feeling don’t get any better – any more brimming with melody and feeling – than this. Of course, there’ll always be plenty who don’t agree. Overly saccharine, bullshit, they’ll opine; a sell-out, they’ll snort. The rest of us should pay them no mind: simply crank this on at an advisable rate of decibels and proceed to get lost in a set that stands together as an archetype, a joy; a youthful and enthralling and heartfelt and exuberant and addictive and bracing and as close-to-perfect example of its kind as you’re ever likely to come across.