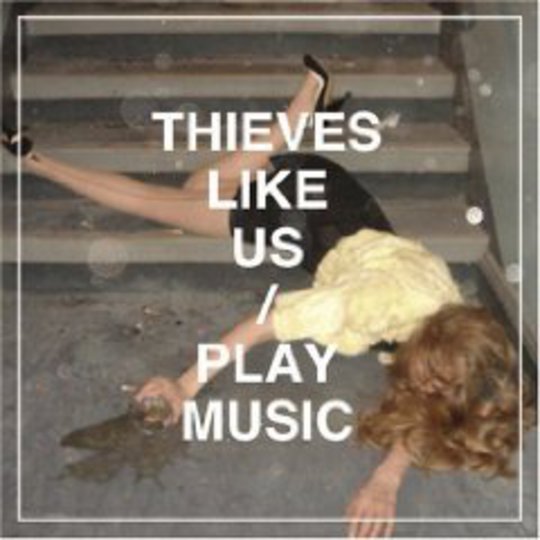 Play Music’s story of misplaced love and desire is set against a backdrop of an arcane urban night club scene, where pretentious clientele throw disdained glances at those in the wrong attire and who are on the wrong drugs; where the enjoyment of the night, should any have occurred, is hidden by vacuous facial expressions for fear of derision at the hands of their post-modern, high-calibre fashion model, business executive friends. In short, Play Music is a detached and ultimately soulless affair; a dance album with no dance, a love story with no love.

That Thieves Like Us should connote such trend-conscious imagery comes as no surprise. Formed in Berlin back in 2001 by American vocalist Andy Grier and Swedish duo Bjorn Berglund and Pontus Berghe, these are the type of chaps who cock-surely believe they can do better than anything else they’ve heard simply owing to their taste in music. This LP conveys both their enjoyment of all-things minimal and krautrock, alongside a huge debt to the hugely in-vogue Eighties; or more specifically post-punk and New Order ('Thieves Like Us' of course being the title of a 1984 single from Hooky and co). Describing themselves as ‘post-punk electronica’, Thieves Like Us extract the New York disco elements of Power, Corruption & Lies and attempt to submerge them under something darker and grittier (a bold move considering the circumstances the aforementioned came about). In reality though Play Music is devoid of the charm and personality that shone through their Factory Records heroes' work.

In fact Play Music starts off well; the throbbing low-frequency arpeggios of ‘Program Of The First Part’ set a murky prologue that introduces the narrator’s relationship with the recipient of his lust; positive in the belief that “you need me, admit it”. ‘Drugs In My Body’ meanwhile contrasts from the rest of the album in its comparative lightness - there’s eager anticipation of the night ahead and the knowledge that it’s “only some time, till we get together”. The methodical bass and early-Nineties hi-hats sit behind bouncy house loops to make it easily the catchiest moment of the album, despite the horrendously trite vocal hook of “going down town with the drugs in my body”. Hereon after though it’s downhill for our lovelorn revellers; ‘An Easy Tonight’ is the slowed-down sound of substances not hitting their mark, and the queasy, claustrophobic atmosphere of the track bleeds into the unfocused sprawl of ‘Lady’; the vocals and synths stumbling to and fro despite the best efforts of a motorik rhythm trying to hold them in place.

The second part of the album is where our narrator really suffers. The comedown begins in ‘Your Heart Feels’ and continues with the realisation that the girl of his dreams isn’t all she’s cracked up to be in the juddering minimal electro of ‘Miss You’ (“and now you won’t let me dance with you… I miss you now”). ‘Desire’ meanwhile steps back from the situation both lyrically and stylistically; a three and a half minute slice of post-punk that sounds like it’s been thrown in a coffin and buried deep underground. The break up is complete by the end of ‘Sugar & Song’; a swirling, forlorn creature of a song that brings with it the morning after the night before.

Surely then this all sounds good; yet from the off there are things that grate. One of the main problems is that ‘Play Music’ is gratuitously wrapped up in pretension and cliché. ‘Fass’ sees Grier nauseatingly talking of “cutting across scene lines” whilst his vocals are delivered with such self-awareness that they manage to derail any notions of love gone wrong. It’s hard to care much for the plight of the doomed relationship when the narrator’s being so bloody apathetic about the whole thing. Another problem is that, like so much else this year, songs are so steeped in retro-revivalism that any shred of concept is buried under cheap-sounding handclaps, Casio-sounding percussion and retro synths - so much so that the music is sent back in time twenty years without even trying to cling on to some semblance of the present day. Not that anyone else this year seems too fussed with this predicament.

Play Music is a good idea poorly executed. Although it’s obvious that it’s not meant to be an out and out body mover, the few up tempo tracks on the LP fail to contain any real energy or excitement. Instead of an album that grabs our emotion and pulls it downwards in sync with the plight of the break-up, the listener is simply left with a cold and detached feeling; a problem that befits an album that’s main failing above all else is a lack of personality.