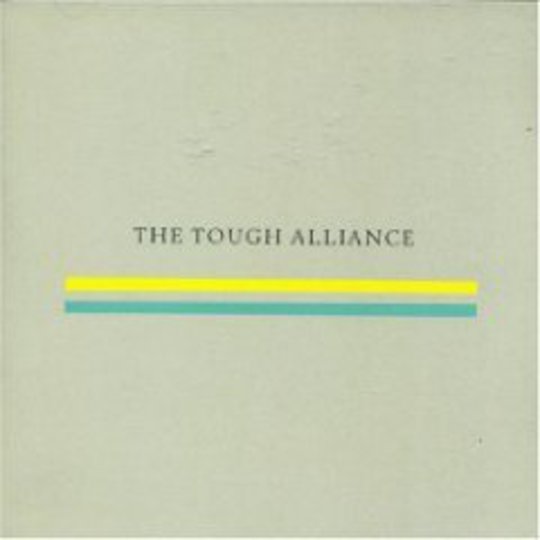 Originally released in Sweden on the Service label (home to fellow countrymen Jens Lekman and The Embassy) back in 2005, it has taken four years for The Tough Alliance's debut album to finally receive a British release. The intervening years have seen the duo of childhood friends Henning Fürst and Eric Berglund leave Service and form their own label Sincerely Yours to release their mainly instrumental second album, the ambient Escaping Your Ambitions, and a proper follow-up to The New School, the consistently titled New Chance (there also being the New Waves EP). Their live shows have also garnered something of a reputation due to the duo's preference for lip-synching to backing tracks onstage whilst ambiguously wielding baseball bats.

The signposts to these subsequent, and subtle, developments are writ large on their debut album. The record opens with 'Tough II': all high-pitched, sky-scraping synth leads and swirling clipped beats over which vocalist Berglund harmonises with himself, albeit artificially pushed several octaves higher. The following two tracks, the title song and 'In the Kitchen' bear many of the hallmarks of TTA's sound: shiny beats, bright and wonky synth melodies and piano motifs redolent of early Nineties Saint Etienne. It's rather a convenient comparison to make, but Berglund's sweet and limber synth and vocal melodies have a lilting Balearic warmth redolent of fellow Swedes Air France (who as it happens cite Saint Etienne as major influence), although taking a bolder and more confrontational approach.

TTA have been labelled by some as Eighties synthpop revivalists, and there's no doubt that there's a certain degree of truth in it. However, the bright 808 beats which dominate the album can be found in as many chart hits of the noughties as the decade that taste forgot, Kanye West being the most obvious culprit. Regardless, borrowing from the sonic well of the Eighties hasn't done M83 or Bat For Lashes any harm. Here, 'Babylon' even has a wonky synth-line and airy synth strings which recall something from M83's Saturdays=Youth insomuch as it wouldn't sound out of place in a John Hughes brat-pack movie, although it eschews the nostalgic bombast in favour of a thicker low-end and greater rhythmic syncopation.

Those who have read interviews with the duo will be under the impression that TTA have a manifesto behind the tunes, and one which often materialises itself in threatening slogans and imagery. Baseball bats crop up on 'Make It Happen': "Against my baseball bat no one has a chance". On 'Keep It Pure' they claim to "take no shit" and paint themselves as dangerous characters on 'Forever Utd.', warning "You know you shouldn’t be playin’ with fire/ You know you shouldn’t be playin’ with us". What exactly they are rallying against remains unclear, and it would only serve to portray the duo as petulant pouting schoolboys if it weren't for the joyous ecstasy with these pronouncements are made, leaving the impression of an almost cute us-against-the-world gang mentality. Something like early-Manics if they were New Order devotees instead of Guns N' Roses fanboys. Though in fact when not putting up a front TTA can be genuinely sweet and touching, as on the loved-up 'Holiday' and the stirring manner in which closer 'I'll Be Right There' cuts to a Liverpool crowd singing musical-number-come-football-anthem 'You'll Never Walk Alone' (although perhaps Everton/Rangers fans would not share those sentiments).

Ultimately the defining characteristic of The New School is a childlike enthusiasm, perhaps best encapsulated on 'Koka-Kola Veins'. Musically it sounds as fizzy a sugar rush as the title suggests, and lyrically features simple pleas for good times ("just wanna have some fun"), a desire to escape in to their imaginations ("We can't feel as good as when we make believe") and then, rather disparately, an attempt to sound dangerous which just baffles ("We've got our own jihad, if you know what I mean"). As a whole the song works as a fantastically energetic party tune, and that is where The New School's strength lies: as a collection of ecstatic party starters it is almost faultless. So there's 'My Hood', with its keening chorus and goofy hip-hop references. Or 'Take No Heroes' which sets its roll-call of influences (from Ice Cube to The Sound of Young Scotland) to scratchy funk guitar and bursts of brass and phat beats of which Timbaland would be proud. Its call to "Take no heroes, only inspiration" is also the album's most coherent statement of intent.

Perhaps the best that can be said of The New School is that, like the Manics' Generation Terrorists, it is inspiring even in its failings, and at very worst it is a damned fine party album. Perfect for summer.