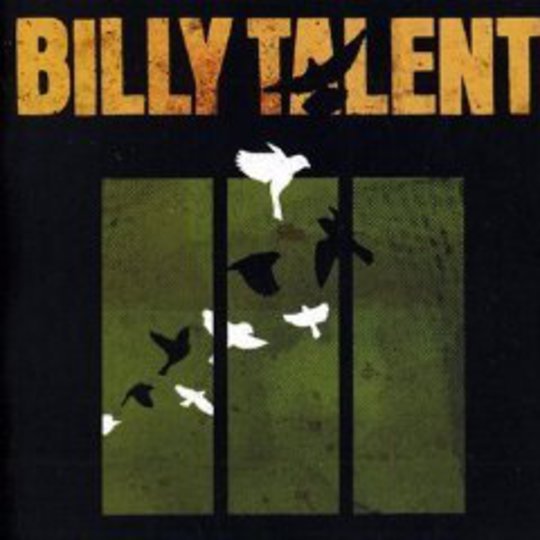 Whilst playing Guitar Hero for the first time last week, I suddenly became overwhelmed by a unyielding sense of shame. I said to myself: "I am a twenty five year old man pretending to play a plastic guitar." During a struggle through ‘Misery Business’ by Paramore I thought, "well I suppose at least I’m not in a band playing this pop-punk shit live. Wouldn’t it be embarrassing to be in my 20s and earnestly sing songs about how much I want to feed Robert Pattinson my filthy pretzel?"

Billy Talent have been chasing the game since the mid Nineties, though back then they were attempting to ape such luminaries as Sublime, No Doubt and The Mighty Mighty Bosstones by playing a horrific brand of ska under the name of Pezz. The band we know today came about via a combination of legal action forcing them to change their horrific candy-coated moniker, and a sudden moment of realisation whilst sitting in their trailer park homes watching bands like The Offspring and Green Day explode on MTV, leading to an abandonment of ska and a boarding of the pop punk bandwagon.

Massively popular in their native Canada, mildly so everywhere else, Billy Talent’s impressive ability to sell records to the boys and girls of The True North strong and free has produced what you might call a ‘Celine Dion effect’ where enough cash money has allowed the Canadians to spread their muck far and wide.

If you look at the much maligned genre of pop punk you will see how the most successful bands have evolved to attract a new audience, developing their sound, building ambitiously from a limited template. Green Day went from singing three minute songs about wanking to rock opera’s detailing the alienation of America’s Youth, and still they only used three chords!

The cringe-worthy cod politics of ‘Turn Your Back’ and ‘Rusted From The Rain’ - with a sort of Soundgarden drowsy grunge feel - were uneventful singles. They set up the downfall of Billy Talent III, an unfocussed and erratic album. For those who haven’t heard BT, be prepared as the vocals of Benjamin Kowalewicz are likely to annoy. How to describe it? Well it is certainly a divisive vocal style, imagine Johnny Rotten intaking a gob full of helium and then getting his head put in a vice Joe Pesci from Casino stylee… in front of a microphone.

To flip the title of a well known album from their fellow Canadians Sum 41, this album is All Filler No Killer. Tracks like ‘Diamond On A Landmine’ and ‘Tears Into Wine’ are atrociously bad efforts, the weight of average songs make Billy Talent III a distended listen, the lack of variety means the album becomes torrid and ill thought out, with no pacing whatsoever.

Brendan O’Brien’s production gives the record a polished sound, but musically Billy Talent III is not substantial; O’Brien is used to working with mainstream heavyweights that are at least a little bit diverse, but Billy Talent are completely one dimensional. To be somewhat kind, there are odd glimmers of hope; the neat bass heavy opening of ‘Saint Veronika’ allows the track to leap from the speakers but all too often it’s the same repeated guitar interspersed with brief impotent riffs. Even the band's usual trump card, the call and response harmonies between Kowalewicz and guitarist Ian D'Sa are barely in evidence.

Billy Talent are banal revivalists unsure of who they are, but making a living churning out a pale imitation of what is neither punk nor rock. They aren’t the only ones, but the fact that they can make the same sounding record three times suggest they are careerists riding the fuse until it blows. Ridiculing the band's own influences, they are Refused without the admirable political rhetoric, Fugazi without the ethics and the awareness of the wider scene, the Buzzcocks without the cheek. The intensity on Billy Talent III feels the same as the intensity of the band's live show, awkwardly forced and absolutely repellent.