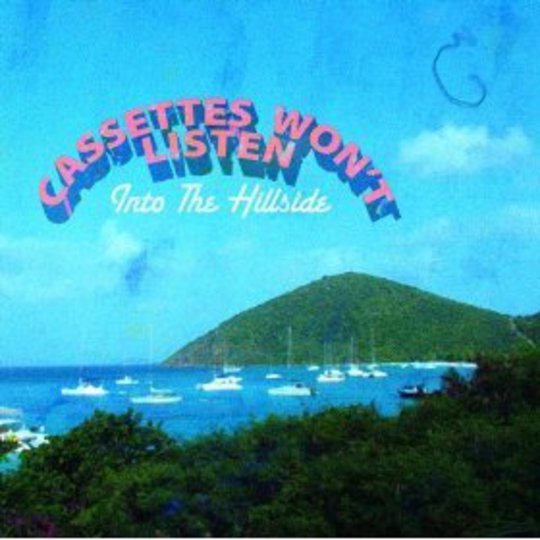 Any MySpace page featuring testimonials from both beyond-simply-annoying-and-into-the-realms-usually-reserved-for-Bono celebrity gossip hack Perez Hilton and actually-rather-good indie blog Gorilla Vs. Bear raises an fair few more questions than it answers. The first that springs to mind – what on earth is something that attracts adulation from two such disparate ends of the blogosphere actually going to sound like? The answer: like something that could potentially attracts interest from either end, but might not necessarily hold onto it for too long.

Jason Drake apparently relocated from his home climes of NYC to the sunblasted sprawl of Los Angeles before recording his latest project as Cassettes Won’t Listen. It shows; Into The Hillside does have a very Californian feel, aurally referencing a whole host of West Coast influences that in places feel like pretty uneasy bedfellows – the sunny acoustic strums of classic Seventies rock, earnest electro-pop melodies and squelching synths more than a little in debt to G-Funk. As a collision it hardly sounds particularly compatible, and that’s part of the problem. In terms of overall aesthetic Drake’s music slips seamlessly in alongside that of the pantheon of artists currently mining the Eighties for melodic and rhythmic ideas, but the whole thing feels a little disjointed, for the most part more like an embryonic collection of sketches than a final coherent product.

When it works it’s lovely. ‘Quickly Approaching’ sets a languid counterpoint melody over high tempo jittery breaks, coming across something like an airier and more fluid 65daysofstatic. ‘Later That Night’, by contrast, is a brooding slab of sample-led instrumental hip-hop that kicks off with lurching bass and washes out into a tail of feedback. But for every track that grabs and holds the interest there are those that just seem to flow by – perfectly pleasantly, I grant you, but unremarkably. ‘A Lovely Drive To You’ rides a bassline unnervingly reminiscent of LCD’s ‘Tribulations’ but drifts away into the background before it even finishes. One or two points even achieve the impressive feat of sounding like questionable jazz-funk; the less said about ‘Hmmm’ the better, in spite of its 'Windowlicker'-esque percussive stutters.

It’s hard to escape that feeling that a lot of Into The Hillside could have done with some sort of focal point, vocal or otherwise. As an instrumental album there is simply not enough variation to hold the attention over its entire runtime – Drake’s production, whilst sleek and clean, flattens everything to a resting heart rate above which it rarely rises. By the halfway point physical frustration sets in at trying to concentrate on something that seems so determined to elude consciousness, to be replaced with thoughts of what to cook for dinner. Over the past year or so, both M83’s Saturdays = Youth and Neon Neon’s Stainless Style have set a seriously high water mark for Eighties-influenced electronica by melding together fragments of past ideas with a coherent vision – a water mark that, on the whole, Into The Hillside has neither the strength nor the conviction to even attempt to reach.