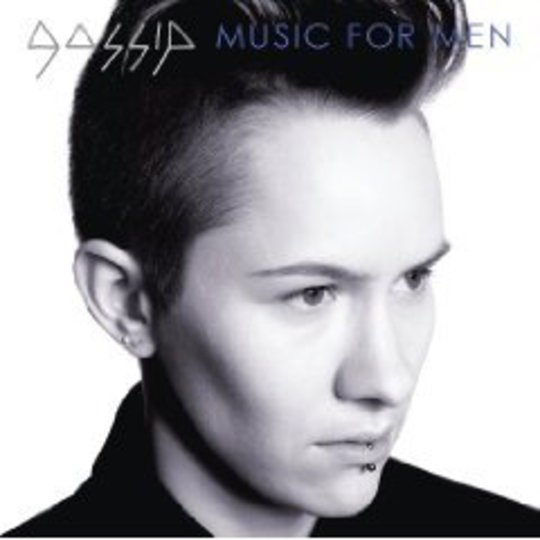 There’s more than a soupcon of irony to the fact that prior to the release of Music For Men, The Gossip were signatories to the DIY powerhouse that is Kill Rock Stars. Because let’s be honest here: Beth Ditto and co didn’t exactly stumble into the limelight by accident. The average military campaign is shorter than the promotional one waged for the album Standing In The Way Of Control, with the agit-disco title track receiving its initial release at the tail end of 2005 and finally cracking the top ten in 2007. Stars was what The Gossip wanted to be, flogging their obstinate potential hit until the bugger finally buckled thanks to the support of NME, Skins, Jonathan Ross, The Guardian, The Friday Night Project and the band’s bloody-minded refusal to quit until the job was done.

But did it actually make them rock stars as such? You can’t help but think it was a pretty pyrrhic victory, Ditto’s celebrity vastly outstripping that of her bandmates and all but one of her songs. Music For Men, then, is faced with a tough task, in that the triplicate aim seems to be to establish that The Gossip are a band and not a solo artist, prove they have more than just one hit single in them, but also establish them as a band of quality, neither a scrappy punk act who lucked out once, nor the overblown pop soul media circus they were threatening to morph into by the festival dates that concluded the SITWOC tour.

The front cover is clearly trying to say something; while it’d be amusing to think they selected the androgynous-as-you-like picture of drummer Hannah Blilie to rub it in the face of original stickslady Laura Mendonca – who departed under fractious circumstances before the recording of SITWOC – the point is to presumably omit an image of Ditto. Which is all very well, except the last two records featured the rather more heartening image of the whole band, united, while the billboard posters for Music For Men use an image of... just Beth Ditto.

And then we have the music. Production duties are handled by the band’s new boss, Columbia Records co-head Rick Rubin, whose schtick is basically a sort of dignified minimalism, having brought order and pop smarts to the sprawl of early hip hop, and added stripped down gravitas to ageing heroes like Johnny Cash, Metallica and Neil Diamond. He most certainly brings this to bear on Music For Men, though it’s questionably exactly why. Certainly from the off – the moment ‘Dimestore Diamond’ kicks in with nothing but a sparse spatter of occasionally distorted bass and Ditto breaks out a measured vocal to tell the tale of a hooker with a heart of gold – it’s pretty clear this is not going to be an overblown diva odyssey. It’s fucking boring, mind; a slow build to nothing that proves little beyond the fact the band don’t have a fulltime guitarist.

Rubin is a master of paring down excess, and though maybe latterly The Gossip had become excessive in some ways, it’s not really an accusation you could level at their music. They painted the sparsest of musical outlines, filling it up with roughcut punk rock rush and salvos of yowls from the singer. Music For Men frequently feels like just the outline.

The punk has mostly been dispensed with for starters – Brace Paine leaves the guitar behind for the bulk of tracks, instead focussing on rubbery bass, typically overlayed with dancey but restrained electronic textures. And it’s so dull: ‘Love Long Distance’ offers up housey tedium, ‘Pop Goes The World’ revolves around a dull as dishwater electro fidget; generally the prescription is some sort of insipid variant on disco. PiL-ish guitars are occasionally chucked in – on ‘Vertical Rhythm’, for instance, their sporadic interjection will be the thing that wakes you up every thirty seconds or so.

The basic equation: band who had previously written one dance song, now attempt to make mostly dance album, with non-dance producer at helm. Previous dance song successful because it featured the world’s most gratuitously entertaining bassline and a genuinely visceral, thrilling vocal, lots of ”whoa-oaa”-ing and bits where Ditto screamed so hard she pretty much lost control of her voice, her much vaunted Aretha-isms collapsing into a feral snarl. Here she merely sounds technically impressive, rarely if ever flying off the hilt. It’s a crushingly un-exuberant album, powered by neither anger nor joy, howls of rage nor whoops of exhilaration, not revelling in any particular aspect of the band’s music, nor kicking against any pricks. The lyrics dabble with outsiders and the odd bit of queer imagery, but there’s nothing revelatory, incendiary or revealing.

There are good moments: ‘8th Wonder’ actually offers some dynamics, its stripped down crawl erupting into a wiry rush of guitars, Ditto hollering ”if there’s a risk I’ll take it” like she honestly means it. It’s kind of the same formula as ‘Jealous Girls’, but hey, it works. ‘For Keeps’, ‘2012’ and ‘Four Letter Word’ have compelling grooves without trying to emulate chart dance music, permeated by a post punky tension that suggests a route that might have worked a lot better had it been pursued more enthusiastically.

But really, should they even be under this level of scrutiny? Thing about The Gossip: they were never a particularly amazing band outside the live arena. Sure they could write a pretty solid song, and sure Beth Ditto has a pretty singular voice, but it’s not like they were churning out troves of underground classics before ‘Standing In The Way Of Control’. In some ways you wonder if they’re not kind of media dupes, Ditto’s talents exaggerated to artificially create a plus-sized, queer figurehead to rally behind. Maybe that’s not really such a terrible thing – The Gossip are famous (for now), and some debate about role models and musical icons has taken place as a result. But should we have expected any of this to have turned them into a band of extravagantly talented songwriters? I don’t think so, no.