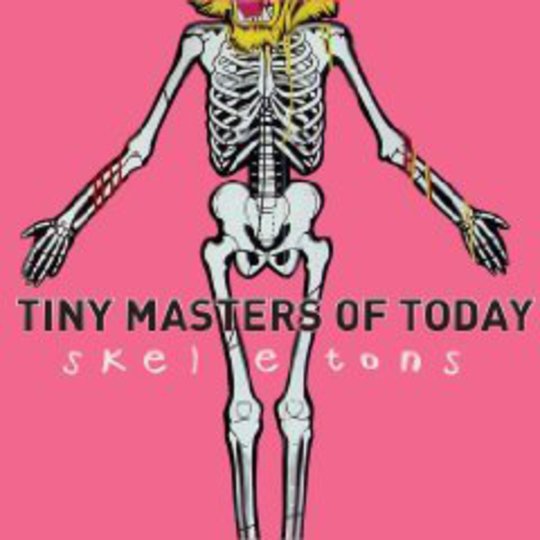 I recently found myself standing in the back room of a shabby Brooklyn venue, watching a precocious singer/guitarist named Marissa Paternoster front a band named Screaming Females. Marissa can solo into oblivion and has a giant stack of riffs that Kim Thayil or J Mascis would be proud to call their own. Her voice is like some ungodly meeting point between Kurt Cobain’s sandpaper rasp and Corin Tucker’s teacherly bellow. I don’t know how old Marissa is, but she’s young. I mean, really young. I receive the Tiny Masters Of Today album around the same time as that Screaming Females show, and start to wonder about the trajectory of America’s youth.

A little back-story here: Tiny Masters of Today are a sibling duo, Ivan and Ada, whose collective age is 28 (Ivan is 15, Ava is 13). They are often joined by a similarly youthful drummer named Jackson Pollis, who replaces their former sticksman, Russell Simins from the Jon Spencer Blues Explosion. Various luminaries (Karen O, David Bowie, Liars) have fallen over themselves to heap praise on the band. I feel a strange paternal glow while browsing through the photos on their MySpace page, but they’re probably used to that reaction by now. The press release for this album even cites dub as an influence, which conjures up a whole world of wrong as I picture Ivan and Ada loading up a huge bong and settling down for an evening of homework and rare King Tubby 7-inches.

Their first album, Bang Bang Boom Cake, was full of guest appearances and garnered a heap of critical praise. Skeletons is the first time Tiny Masters have really stretched out on their own, and was recorded on GarageBand at their home in Brooklyn. Curiously, they sound a lot better without all the celebrity involvement of their previous record. The brittle production values, distorted beats, and constant iteration of ambiguous phrases are reminiscent of Luscious Jackson’s In Search Of Manny, although Tiny Masters still retain the punk rock spirit that helped hoover up all the interest in their earliest recordings.

Ava made the transition to her teenage years with this record, and it shows. Her oblique lyrics work as allegorical paeans to typical aspects of teenage life—suffocating peer group alienation, a drive to be cool, the possession of a jaded seen-it-all-before outlook. She’ll often just repeat catchphrases (“drop the bomb, man”, “banging at the rhythm of my big bass drum”) that she’s picked up, which don’t ostensibly mean much, but serve as a fond reminder of how such things play an important part at that age: all the cool outsidery kids at school add jargon-filled catchphrases to their dialect. There’s no great lyrical depth at work here, other than a few barbed comments at Ava’s fellow teens, and nor should there be; her self-reflective Billie Holiday opus can wait until she’s at least 16.

Tiny Masters have also got a remarkably mature grasp on how to manipulate a studio. 'Big Stick' is drilled from a base template of thudding drums and squeaky electronic bleeps, which crumble into sluggish melancholia as Ivan and Ava pile on the compression. That’ll be the dub influence at work. They’re fond of bundling acres of distortion and reverb onto Ava’s vocals, which they’d be wise to avoid in the future — that technique already feels perilously overused (see: Crystal Stilts, Vivian Girls, The Beets, etc.). Tiny Masters are also acutely aware of what not to play. Despite having a string of GarageBand plugins to manipulate, Ivan and Ava keep it simple, sticking to their punk rock creed and discretely assimilating it with electronic elements that owe a clear debt to their former collaborators in CSS.

I’m at another show shortly after witnessing Screaming Females. A band named Sisters, who are roommates with A Place to Bury Strangers at the Death By Audio loft in Williamsburg, are playing. An excitable mosh pit instantly opens up (Sisters are a phenomenally engaging live band, but that’s another story for another time). Two flannel-clad teenage kids enter the venue, tentatively nodding their heads on the outskirts of the pit. By the end of the set, they’re dancing with wild abandon, completely wrapped up in Sisters’ glorious racket. Like Tiny Masters, these kids are at that enviable point when all this seems fresh and new. You can almost see the process of discovery burning brightly in their eyes. Skeletons perfectly captures that moment.