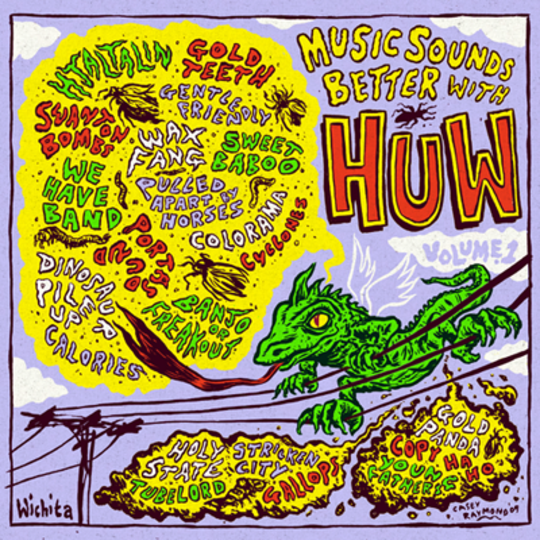 Radio 1’s new-music poster-boy, Huw Stephens, has digits dipped in many a musical pie, from festivals and Welsh TV to record labels, so his latest digital endeavour - a posh mixtape, exclusive to iTunes - comes as no surprise, particularly when he’s been banging on for ages about “the day he gets to use 'Music Sounds Better With Huw’ on a regular basis”. Well Mr. Stephens, that day has come.

All too aware of the god-awful bilge Radio 1 pumps out daily (my office is R1 or Absolute all day: a terror you can’t measure), I approached this download-only compilation with a degree of trepidation. But as the face of 'Introducing...', and with gig attendance rates so high they’d warrant an award if he were at school, Huw is marinated in new music. No one can say this Welshman doesn’t know his spring onions.

By championing a handful of bands, Huw inevitably begs to be mauled alive for missing this or that 'obvious' artist, so rather than divert from the task in hand, I’ll simply say this is a snapshot, a sample of what lurks in our sticky venues right now, and leave the debate to you. Those who enjoy the Krypton Factor observation round may have noted, though, that this collection is subtitled Volume 1, suggesting rather strongly that there’s plenty more where that came from.

Reading like a who’s Huw (sorry) of the hotlists, Mr. Stephens’ first attempt assembles a fairly eclectic selection of songs from the likes of Dinosaur Pile Up, Gallops! and Banjo Or Freakout, while playing to the tastes of his familiar indie audience. It also considerately tots up to a burn-friendly 78 minutes for maximum music-to-CD ratio.

Demonstrating these indie leanings, the compilation bursts into being with three typically zealous tracks, the first of which comes from Calories, in all their cymbal-centric glory. As expected from a ‘new music’ collection, ‘Adventuring’ is one of many songs to enjoy a touch of the lo-fi, occasional off-key vocals helping evoke the ‘live experience’. Stephens’ latest champs, Copy Haho, follow, laced with pop-tacular licks and lines sounding not dissimilar to The Cribs or Good Shoes. These may not be hard hitting political messages but you can’t knock a hooky little chorus and it’s ‘You Are My Coalmine’ that I find myself singing at inopportune moments.

American warblers Wax Fang keep the pace as they conjure rousing scenarios, pushing forward with regimental riffs and air-raid sirens, while a curl in the accent makes it sound strangely like an Irish battle song, if such a thing exists (N.B. Google says yes). The song is called ‘World War II (Pt. 2)’. Makes sense.

From here on in the tracklist becomes more capricious, darting between temperate ambience, harsh thrashing guitars and heady beats and effects. This will seize you in one of two ways: the first is confusion, never certain if the changeable path is heading somewhere you’ll like. The second is excitement, grasping you steadfastly, perched in anticipation of another reveal.

We Have Band's ‘Oh’, in the guise of a Plugs remix and stripped of its bass, sadly loses its original funk only to make way for a bunch of bleeps better suited to dialling tones and pinball machines. This isn’t to say it’s unpleasant, but it simply detracts from rather than develop the original. ‘Oh’ clumsily crashes into Pulled Apart By Horses' brand of post-hardcore pop-rock, where electro blips are exchanged for weighty riffs, steam-rollering you like a rough and ready massage before morphing again, as the marching torrents of Hjaltalin’s multi instrumental ‘Suitcase Man’ whip up winds and bad weather with brooding bassoon, violin and undulating percussion like progressing rain.

The eye of the storm is Sweet Baboo’s ‘Woe Unto Me To Get High’, which drops the tempo with an earthy, understated alt. country prayer. Minimal and raw, yet carefully mixed, it delicately layers acoustic, banjo and slide guitars over Stephen Black’s thick caramel tones and subtle backing vocals. This is a blissful pocket in the midst of the commotion.

Returning to the indie-pop thrashings of Swanton Bombs and Cyclones, we find ourselves on a familiar road of lilting tempo. The Bombs’ thudding ‘Sorrysayer’ distorts and crackles deliciously, while imperfect vocals and the echo of drums reverberate off the walls, soon followed by the quiet of ‘Eighty-Eight’s atmospherics and the question: What is that sound? A vinyl crackle, thigh slaps, footsteps, a kazoo..? Gentle Friendly wash over me, while Young Fathers’ ‘Bring It Home’ forces a press of the skip button. There’s something about the samples and incessant maracas that my mind cannot accommodate.

Back on track, Stricken City - armed with wooden block and not afraid to use it - revive the spirit of Sleeper with added bass funk, while Holy State serve up dirty guitars that seem to fall somewhere between The Hives and Nine Black Alps. Cue another electronic interlude courtesy of Gallops! and appropriately named ‘Lasers’, hooting beeps and blips like a robotic owl, building towards an onset of drums and immense guitar.

Tubelord deliver another little gem. If you don't like it simply for the title alone (‘Somewhere Out There A Dog Is On Fire’), then the guilty pleasure of its woven sugar-pop melodies and heavy guitars will get you, as you sing the words “badda-bleep, badda-bleep”. Who says good music can’t be fun?

You may think you’ve heard ‘Opposites Attract’ before, and not necessarily because you have. Dinosaur Pile Up’s hefty chord progressions here are akin to a Nirvana/Weezer lovechild cranking out some classic fuzzed up alt rock. You’ll like it, but possibly because you like every song it already sounds like. Just don’t let it put you off them in general.

Flipping the coin once more, Portasound provide an experimental feast as filthy synthetics and bass form a murky pit of noise over which the clean, crisp melodies ring out; a total contrast, again, to its successor, Colorama, which is full of eastern sweetness possibly to the point of saccharine. But ‘Oyasumi Baby’ comforts with a simple charm and sincerity to the words: “There, there/Don’t be scared/It’s just another night mare/It’s alright/Sleep tight/Close your eyes to my lullaby”, showcasing the band’s tender harmonies.

Gold Panda’s ‘Like, Totally’ closes the album, bringing a near meditative clam. Crackling white noise loops create the sense of rain blustering against a window and a magpie call cements the ethereal early morning setting. Gently comes the sound of a telephone voice, and the mumbled words “fucked, like, totally fucked” bring closure to the album with quiet satisfaction.

While the track order may be debated – is it better to group songs by mood or mix it up? – the ultimate aim, to spark interest and promote further investigation of these bands and their peers, is achieved. Heck, even if only one song hits your special spot, that’s one more than before. Plus, as most tracks here are meant to be "exclusive", there should be something here for even the most up to date music fans.

Huw’s jumble should most definitely prompt a good ole rummage.