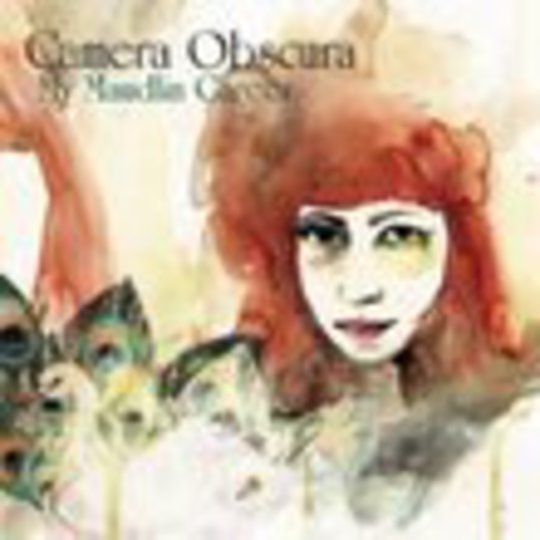 My Maudlin Career begins in a decidedly non-maudlin fashion. 'French Navy's upbeat Phil Spector-esque echoey snares and strings accompany Tracyanne Campbell's excited introduction: "Spent a week in a dusty library / waiting for some words to jump in me / we met by a trick of fate / French navy my sailor mate." Like a hormonally-charged student trying but failing to concentrate on a dissertation, so the new love in Campbell's life is undermining her attempts to put pen to paper. However, she needn't have worried: her beau acts as the inspiration for a number of songs on the album - an album purely and simply about love.

It is no wonder that Campbell and her Camera Obscura bandmates feel so comfortable with the topic of love, or more precisely, a child-like, innocent love. Campbell's soft Glaswegian accent and delicate, nasal tones suit the fragility and naïveté of a he-loves-me-he-loves-me-not sentimentality. Her witty interjections straight from the mouth of Juno MacGuff, help the subject matter from cloying the listener with sentiment and carry the songs along with a winsome breeze. Rather than rejecting the record for its mawkishness, its wide-eyed genuineness and gentle affection draw you in. Campbell's stories and confessions convey such truthfulness, it's as though the listener were privy to the pages of a teenager's diary.

Camera Obscura's quiet, acoustic brilliance - the kind you'd associate with Kings Of Convenience and, of course, Belle and Sebastian - occasionally gives way to a bigger sound. Like the blooming confidence of someone finally accepted by the opposite sex, My Maudlin Career is a happier record than previous efforts and more content with itself and the world. 'The Sweetest Thing' and 'You Told A Lie's summery tales of newfound love are illustrative of Camera Obscura's newly-found happiness. That isn't to say the album doesn't carry more reflective moments. Insecurity, doubt, regret and loneliness also have time to creep in. 'Away With Murder's bluegrassy lamentation, punctuated by an eerie organ melody, is a perfect example of Camera Obscura's masterly understanding of melancholy - a quality Mazzy Star had in abundance.

The heart-crushingly beautiful 'James' - a tale of rejection and dying love - captures the subtle, bittersweet magic of Velvet Underground's 'Sunday Morning'. 'Careless Love' - with its disarming crescendo of strings - unfolds its layers and leaves them at the mercy of the wind as Campbell looks to close one relationship so a new one can begin: "I've been really struggling / to think of you and I being friends / I blow hot and cold / yeah I'm like a yo-yo / so I don't think I should see you again".

Camera Obscura perfect their homage to the Ronettes - and Spector in general - with title track, 'My Maudlin Career'. A reverb-strewn piano riff pitter-patters along as bass saxophones provide the jazzy sleaze accompaniment to Campbell's typically coy cuteness: "You kissed me on the forehead / now his kisses give me concussion". Frustration soon works its way in - "I promise not to burden you / please let me go" and then defiance: "This maudlin career has come to an end / I don't want to be sad again". Fighting the temptation to wallow, Campbell's lyrics are reflective not only of previous romantic encounters, but of the band's struggle to broaden their musical horizons and move out of their maudlin rut.

Capable of renewing anyone's belief in love, 'Forest And Sands' is yet another highlight. Combining the child-like wonderment of Wall-E with the quiet melancholy of a Pet Sounds-era Brian Wilson, Campbell sounds utterly convincing when she sings "it feels like none of this is real". As the album bows out with 'Honey In The Sun's merry jig, you can picture the big, happy loved-up smile on Tracyanne Campbell's face.

Occasionally shrouded in sadness but with happiness always beating from its core, My Maudlin Career lays bare the sweet melancholy of love.