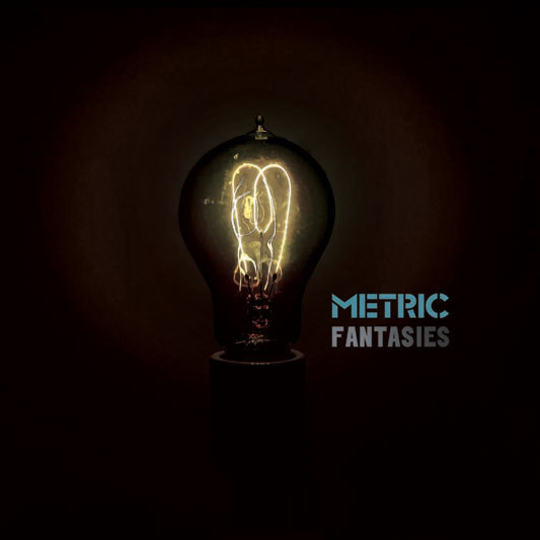 A criticism levelled at a lot of successful bands is that they write songs for the sole purposes of being played in the vast arenas and stadiums they wish to sell out. Kings Of Leon, Snow Patrol and White Lies are chief amongst those who are pelted with the sneers of making ‘soulless music for the masses’. This is a fair point and as anyone who has heard Kings Of Leon’s ‘Use Somebody’, or indeed their whole fourth album will testify, ambitions aroma can soon smell stale. It begs the question though, Can you make an album of stadium style music whilst retaining an air of dignity and most importantly - some good tunes?

When you first listen to Fantasies by Canadian pop rockers Metric, what is initially striking is the scale of everything. From the gargantuan drum beats to Emily Haines' crystal-clear vocals, it’s an album of epic proportions and all the better for it. Following up previous album Live It Out was always going to be a tricky proposition as, despite being a stunning effort and probably better than Fantasies, it lacked a focus and skipped genres to such an extent it became hard to establish which sound suited the band best. Fantasies, however, knows exactly what it is and wants to do and that’s big meaty rock songs.

As soon as ‘Help I’m Alive’s opening line “I tremble” echoes amongst the expectant feedback and drums, Fantasies sucks you into a seductive world of slinky pop songs and riffs to get the makers of Guitar Hero salivating. From therein we get the romantic escapism of ‘Sick Muse’, which sees Haines singing “Everybody just wanna fall in love” like a carefree teenager leading a Polyphonic Spree style mass of young lovers off the edge of a cliff. If ‘Sick Muse’ is a pop song, then there is no disputing that ‘Satellite Mind’ and ‘Front Row’ are the rock songs. Taking their lead from old tracks like ‘Monster Hospital’, the heavier elements of Metric in 2009 are just that much heavier and more intense. ‘Satellite Mind’ is particularly impressive and comes to a triumphant clattering climax. With all this talk of stadium rock, guitar amplifiers and noise, fans of the genteel side of Emily Haines may fear that there is nothing on ‘Fantasies’ for them but every good monster gig needs its lighter (or should that be mobile phone?) waving moment. The soothing sounds of ‘Collect Call’ and ‘Twilight Galaxy’ show off Metrics sublime use of electronic looping and processed drumming whilst providing ample backing for Haines' delightfully fragile vocals.

It is when they go for broke that Metric excel, however, and the two finest moments of this whole album come with ‘Gold Guns Girls’ and ‘Gimme Sympathy’. The former is a ferocious battle anthem which sees rapid fire vocals interspersed with a machine gun like guitar which strikes through the song like a knife through butter. ‘Gimme Sympathy’, on the other hand, asks a most pertinent question of our times- “Who would you rather be? The Beatles or The Rolling Stones?" Given that those bands are better known these days for splitting up with inappropriate wives and girlfriends quite frankly I’d far rather be in Metric.

Having the benefit of writing this with hindsight this record has been overlooked somewhat by critics and fans alike. It’s something of a surprise, however, considering a band like Phoenix had a brilliant year and emerged from being the size of Metric into one who can sell out huge venues, music splashed all over TV and films. Fantasies contains six or seven songs as good as the French band's omnipresent ‘1901’ and ‘Listozmania’. You can’t help but feel that all those who have ignored Metric in 2009 are simply missing out. Fantasies is proof that you can make big event music that doesn’t make you die on the inside.