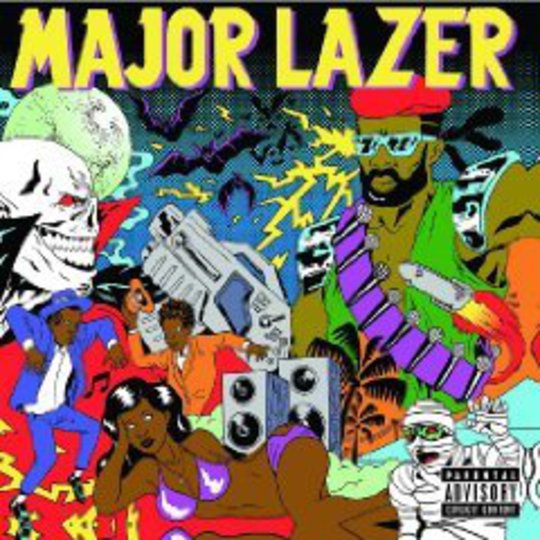 Major Lazer is a decorated Jamaican military commando. He’s a veteran of the secret Zombie war of 1984 with a laser for an arm. He now leads a battalion of MCs on a mission to bring dancehall out of Jamaica to the masses. There are some suspicions that the Major is just a puppet for the behind the scenes machinations of Privates Switch and Diplo, even some explosive rumours hold that Major Lazer may not even exist. Whatever the truth, Guns Don't Kill People... Lazers Do is an album with both occasional brilliance and some tragic misteps, of varying strengths rather than strength through variety.

Electronic dance music and MCs don’t always get on well. Countless dubstep and D'n'B tracks have been massacred by pointless bravado on the mic. Thankfully, some genres have voted to veto vocals all together. Yet rapid-fire Jamaican delivery does have that uniquely instrumental quality; it can bring a human connection to a song even as you understand nothing of the lyrics. Switch and Diplo handle dancehall’s balance between beats and vocals beautifully for the most part. Thus most song’s fates are in the hands (mouths?) of the MCs, and live and die according to the vocals. Some therefore fail quite spectacularly. For example the offensively misnamed Einstein displays a staggering level of intellectual emptiness. 'What U Like' is a discussion of the various things a friend of Einstein’s enjoys. She doesn’t seem that into raindrops on roses or whiskers on kittens, generally preferring “when bad man fuck you.” The stupidity of the lyrics is matched only by their tediousness. “When me beat it up like a fight, ah that she like, she love it like our life, ah that she like, scream ‘till she don’t have no voice, ah that she like, when me FUCK HER ALL NIGHT!” or “You’re cute, you’re breasts stiff and you’re pussy is fat, that’s why me give you cock which tough like it’s a brick hut.” For some reason Switch and Diplo paired Einstein with a fairly minimal slow-tempo beat. It only highlights his awful rhymes and boring flow: this is possibly what Tenacious D would sound like if Jack Black were Jamaican.

The other painfully terrible track is 'Keep It Going’ Louder', with Nina Sky and the truly abysmal self-styled 'king of the auto-tuner' Ricky Blaze. There is nothing in this song but a cacophonous auto-tuned idiot mindlessly distorting about how he’s buying out the bar and repeatedly stating his desire to party with a girl. Said girl probably isn’t having a great time of it, she’s probably struggling to breathe, buried beneath the other “girls in the truck about six chicks deep.” But going after the lyrics is a particularly pointless endeavour here, as is even attempting to comment on the beats Switch and Diplo laid down. It’s all completely fucking pointless because the only thing you can here is some deafeningly irritating apocalyptic auto-tuner destroying everything in its path.

Those two tracks though are by far the worst on offer for what is, by and large, an excellent album. Not all of the tunes rely on the MC: on 'Pon De Floor', the vocals are more or less irrelevant. Vybz Kartel is relegated to laughing and occasionally shouting "Major Lazer!” Yet with sparse vocals, Switch and Diplo’s experimentation can come to the fore. The track can’t really be called dancehall, with just a snare-drum building up to the real focus of the song, which is a strange kazoo-ey kind of wobble. That sound might not be to everyone’s tastes, but it demands your attention and like a cream-based sauce goes straight to your hips.

The opening track and first single 'Hold The Line' is another that feels vital and exciting. A Pulp Fiction-style bass guitar combines with the most thumpingly beautiful bubbling bassline. Mr Lexx does perfectly adequate work with inane rhymes about “hot gyals,” but Santigold is a nuclear bomb of charismatic energy. Her trading of an O for an I appears to have done nothing to diminish her powers. 'Hold The Line' is an example of a quality creative confluence between producer and MC, when Santigold steps up to double time, more than “vibrate like a Nokia” she’ll make you shake so much you’re on the Richter scale.

There are more impressive tunes; the infectious 'When You Hear the Bassline' (featuring Ms Thing) and the darkly ominous 'Anything Goes' (featuring Turbulance). Each track on the album feels genuinely different from the next and overall it is tentatively experimental. As with any good experiment the failures are almost as important as the successes. The old school reggae and the auto-tuned idiocy are utterly redundant, as pointless as water in whisky. There are four or five properly innovative and exciting tunes here. If Major Lazer can leave some wounded soldiers for dead and just take his work a little more seriously, his battalion could well push on and maybe next time produce something truly important.