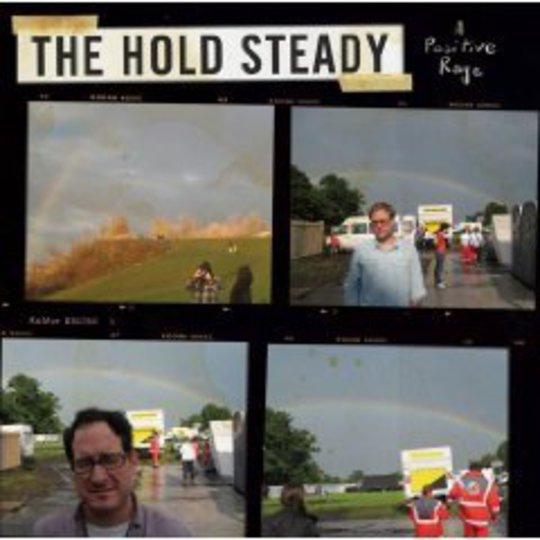 Listening to the 11-minute closer, ‘Killer Parties’, it becomes absolutely clear what The Hold Steady do that no-one else in the world really does.

No, it’s not bringing back E-Street Band-era Springsteen with extra grit and punk (– more than The Arcade Fire could ever manage) or indeed, being the first band to namedrop The Replacements who actually make you (as a UK-citizen) want to give the critically-fellated Minnesotans another chance. No, what Craig Finn does is to extend the Between-Song-Banter until it becomes the song, until it becomes the music, until it becomes The Hold Steady (that epic, un-evolving, fashion-transcending bar-band playing in Heaven). Actually, this becomes clear halfway through the first listen to this, the band’s first live-album, even before getting to ‘Killer Parties’, on – say – ‘Girls like Status’, which begins with Finn telling the audience what his father told him (“boys like looks, but girls like status...”) and ends with the whole band singing the punchline (“the Hold Steady... the Hold Steady like status!”)

Cutting to the chase, this is a damn-near perfect live-album – everything a great live-album is and should be, with quotable banter, most of the songs sped up and urgent, and some of them shagged out, but all the more gritty for it, too. You get extended versions (‘Citrus’) and you get reeeeeeally extended versions (‘Killer Parties’). Finn’s right up in the front of the mix, and Franz Nicolay (moustachioed ex-Dresden Doll) is hollering not far behind. Near the middle of the set – and Yes, this is a single set from Hallowe’en 2007 – there’s a run of songs that succumb to the band’s characteristic flaw (more evident on the albums); namely that some songs have a great verse (‘Ask her for Adderall’) or a great chorus (‘Southtown Girls’), but not both. Here, though, the energy carries you through some of the stodgier blues-rock, making many of these the definitive versions. With its riff filched from ‘TV Eye’ and a string of dubious puns, ‘Barfruit Blues’ used to bug me (surely Iggy could have taken writing credits from these guys rather than do those Insurance Ads?). Doubling up the vocal doubles its impact, though, and you can tell Finn’s feeding off the audience when he delivers his punchlines.

Meanwhile, the saga of Holly and Charlemagne trudges on – Finn’s cut-up Catholic rock opera in which the futile and circular life of barflies (seen through beer goggles) is dignified by notions of Guilt and Falling from Grace even when it should be most squalid; it’s all there in verses like: “Hey Citrus, Hey Liquor, I love it when you touch each other / hey whisky, hey ginger, I come to you with rigid awkward fingers / I see Judas in the hard eyes of the boys who work the corners / I see Jesus in the clumsiness of young and awkward lovers...” Sure, Springsteen did most of this on Born to Run (1975), but on another song Finn slyly rewrites his girl-as-vision to make her the girl-as-revolutionary – another kind of male fantasy, but a more cerebral one. It’s in these subtle borrowings that you get a glimpse of a kind of immortality you can identify with, since Finn not only invokes centuries of Catholic tradition, but a Catholic rock tradition that was there before him, and that’ll be there after he’s gone.

Old hand or newcomer – you need this. True, seven of the sixteen songs here are from the band’s splendid Boys & Girls in America, but two aren’t from any album, one is only available on the limited version of Stay Positive, and all the versions kick ass. The tour-DVD is fairly standard in tone and content, albeit that it’s almost too slick and often feels like a press-pack: well-rehearsed snippets of autobiography from band-members, spliced with the soundbites of the more literate fans who might very well work in advertising (“The Hold Steady is rock’n’roll salvation…!” et cetera).

It’s so much more than a greatest hits set, though. On the final track, ‘Killer Parties’, the band find a groove you never want to end (or, at least, one that they can carry for eleven minutes), and let Finn outline just what The Hold Steady means – why it’s the band and the audience and the whole point of rock’n’roll. Artificially, he stutters his Big Point (awed before it), until the stuttering becomes the vocal melody. It takes five minutes for the guitars and organ to crash in, just like the punchlines and pay-offs we already knew were coming, but are worth the wait. We’ve been the Hold Steady, and You’ve been the Hold Steady, he says predictably... but for once, on a live-recording, you didn’t have to be there. You’ve been the Hold Steady.