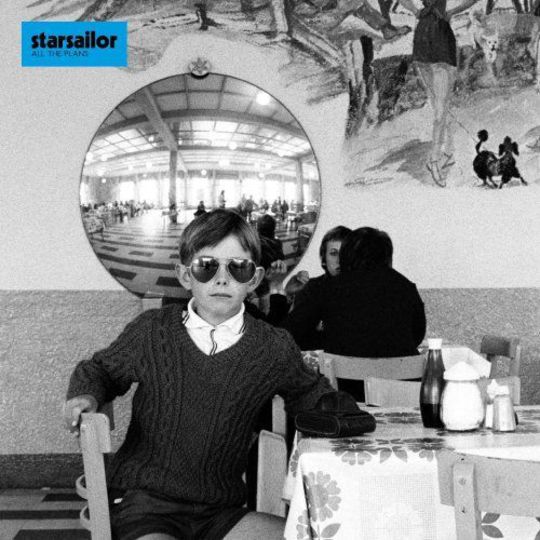 The fourth album from Starsailor arrives to little fanfare, some bafflingly positive broadsheet coverage aside. Since emerging in Coldplay’s wake at the start of the decade, the band have sold “more than three million albums, won legions of fans and toured the world supporting the Rolling Stones, The Police, U2 and The Killers.” And that’s it, really. They’ve made some albums, they’ve supported some bands. They’ve probably played some really good shows, and they’ve probably had a really good time.

On All the Plans’ first track it’s astonishing how much they resemble Keane attempting a heartfelt re-imagining of ‘Smells Like Teen Spirit’. The sheer conviction with which James Walsh belts out the lines “now the light’s out, I discover / She is sleeping, with another” even more-so. Seriously – you get a bit swept up in it, and then when he proclaims “if you love someone, don’t throw it all away,” you’re all like, “fuck yeah! Right on Walsh! I won’t!”

Argh. You see, it’s impossible to write about this album without coming off a bit haughty. And it’s not that it’s truly bad as such, it’s just that… Well, actually it is kind of bad. It’s sort of infuriating.

Take ‘The Thames’, replete with horrendous guitar licks (possibly courtesy of Ronnie Wood). It sees Walsh sitting “by the riverside,” wondering “is love just a big mistake? Just a risk that we all take?” before consoling himself with the thought “when I think of you and I / I know I’ll be back with you someday.” Really James Walsh? How, exactly? You offer no evidence as to why your desired should return – no narrative as such wherein you might frame your woes. Nope, you merely list tired platitudes on the topic of romance thwarted. Tenses past and present are all over the place, and not in a good way. She’s long gone, yet you’re working out instances in which she might stay? In a flagrantly not-making-any-sense way. It’s just laziness. Banalities sewn together, clichés plundered with gusto. Infuriating laziness.

It’s a trait that epitomises the record. See the opening seconds of its title track, which couldn’t sound more like Oasis if the band tried. It’s a horribly calculated, horrible slice of anthemic horribleness. Throughout, dreadful lyrics are in abundance, pianos are thumped and drums are bashed. America is pretty bad, love is pretty good (though sometimes it hurts pretty bad), and it pretty much sounds like a composite of bands equally unimaginative.

Except. As it winds its way towards prerequisite epic finale, ‘Change My Mind’ actually features the lyric “if I fall, would you catch me?” And herein lies the thing: Starsailor are so wantonly unoriginal, so brazenly mediocre on every level, it’s almost like they don’t even realise that they are and totally mean all this stuff. And as long as this (admittedly implausible) possibility remains, it makes All The Plans impossible to dismiss out-of-hand. Dislike maybe – certainly never want to hear again, in this instance – but there’ll always be Hollyoaks montages in need of sound-tracking, bands in need of opening acts and Starsailor fans in need of a fix.