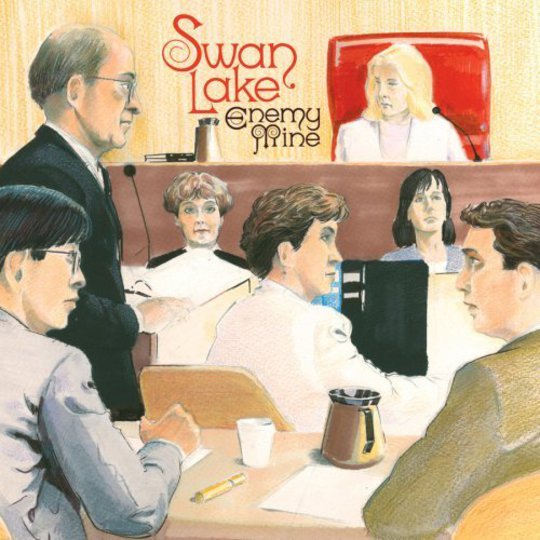 With the second albums from Swan Lake and the Handsome Furs arriving within two weeks of each other, it’s becoming clear that Spencer Krug (Swan Lake / Sunset Rubdown / Wolf Parade) and Dan Boeckner (H. Furs / W. Parade) could be the Lennon and McCartney of our generation. No, that’s not to say Wolf Parade are going to be the biggest band in the world, but it’s thrilling to see a pair of songwriters rattling out so much inventive music in such a short space of time.

Leaving aside the prospects for Spencer’s indie-pop concern, Swan Lake is his more "difficult" project with Dan Bejar of Destroyer, and Carey Mercer of Frog Eyes. Last time round, their record (Beast Moans) felt like an indulgence appealing to freakish fans of second-division prog like Comus and Amon Duul, and very much a side-project for all concerned. This time round, they’ve used a court painting from a criminal trial to make the cover of their record look even uglier than the felt-tip goblin-orgy of the last. You are, at least, warned...

Mostly, though, it’s really quite sweet; this Swan Lake is more Tchaikovsky than Public Image Limited. Beast Moans (2006) showed promise with the gorgeousness of ‘All Fires’, and a general atmosphere of the Brothers Grimm illustrated by acid-fried hippies, but there’s romance aplenty, here. The pianos on Spencer’s ‘A Hand at Dusk’ and Dan’s ‘Heartswarm’ tumble like snowflakes. The weirdest moment is the six-minute album-closer, ‘Warlock Psychologist’, which (as anticipated) lays down some flatulent Black Sabbath-like guitar, topped with the lost recordings of Ozzy Osborne’s sessions of Laingian therapy. Surprisingly, it never out-stays its welcome. The players might as well be in separate rooms, bashing out guitar and keyboard lines, and Dan Bejar’s shrieks might be coming from the dungeon of their dilapidated schloss in the Schwarzwald... but they (sort of) come together on the sloppiest post-rock climax ever. Actually, the vocal line on Dan’s ‘Spider’ could be weirder, springing about in a way that makes you picture him splaying his fingers and bugging his eyes as he mimes the eponymous arachnid; none of it’s eye-rolling though, and every song has a pay-off.

The stylized vocals remain, teetering on the brink of psychosis, but the sound’s no longer cluttered with notes flying everywhere, and the melodies have been simplified, retaining just enough of an endearing ricketiness. The centrepiece, ‘Battle of a Swan Lake, or Daniel’s Song’ reiterates the message of the last album (described on the sleeve as a testament to friendship). Picture the band converging on an inn, like a gang of masked bandits from El Topo or The Fall, and sitting down “at the table where Death resides…” The lyrics flit between the real and surreal as the artists’ very real threat of having to quit because of debt is transformed into the fear of the inevitable shoot-out. All three amigos join in for that chaotic final chorus, where it's unclear who survives, or passes into legend; whoever gets gunned down, you get the sense Art has overcome Commerce, somehow.

To the Sunset Rubdown fans: Spencer’s songs are strong, as expected, but not necessarily the best - the others are gaining. Less expected is that Carey Mercer – a literary warbler akin to David Thomas of Pere Ubu, and (in his prose) a magic realist akin to Donald Barthelme – is really coming into his own as a songwriter. This still isn’t for everyone, but it’s sounding less like a side-project, and more like a super-group.