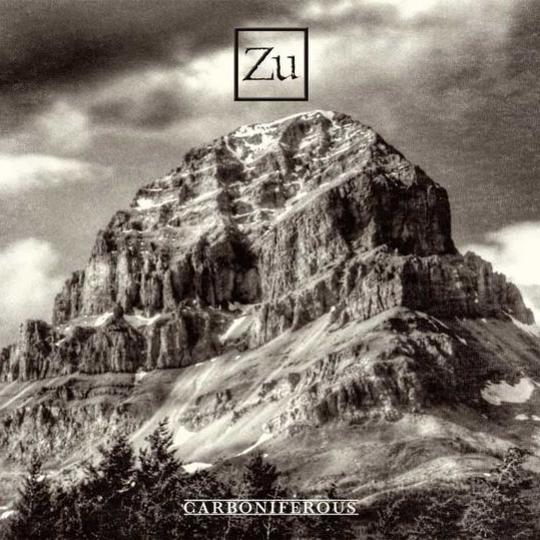 Prepare to be baffled as much as you're battered: opening track ‘Ostia’ lays down fat, fuzzed-up beats that scream ‘Rocket USA’ or ‘Ghostrider’ (from the first Suicide album), for a dozen-or-so bars, before live cymbals gallop in, and then a full-kit with all the instruments writhing around them with a limberness and energy you’d think impossible for figures so intricate.

If you were thinking Fuck Buttons one minute, you’ll be thinking Tweez by Slint next, because Zu are as much about continual pounding controlled demolition as they are sudden, surprising twists and lurches. To play with this intricacy and force takes years of disciplined playing, and the Italian threesome (drums / bass / sax) have made 14 records since 1999, but never once get lost in widdleyness. There’s no doubt they’ve got as many ideas as Mike Barr (Orthrelm / Ocrilim / whatever), but when they find a big dumb riff they like, they ride that brontosaurus right into town, Melvins-style. Take ‘Carbon’, where Luca Mai’s baritone sax grunts like pigs rutting, like Morphine, just three notes, before Jacopo Battaglia's live electronics rise in a vertiginous drone.

For all the Very Metal titles (‘Chthonian’, ‘Erineys’ – i.e. the Furies), it’s a wildly danceable record that’s so life affirming I would have gone with ‘Soulympics’ as a title for the album, because it feels like such a workout; an assault course of genres. Actually, ‘Soulympics’ (halfway through) is the album’s first comedy moment – a breathing space – on which Mike Patton pretends to be Yog-Sothoth or Sauron messing around in his kitchen, muttering incantations over his cauldron, and on ‘Orc’ (at the end) bibbles and groans like the eponymous half-breeds. These are the only vocals, by the way, but you won’t miss them, or guitars, most of the time – Massimo Pupillo's bass is so melodic – and that's Buzz Osborne from the Melvins guesting. So anyhow – crossover album of the year, no contest (as Zu put it, they're: math / metal / jazz / punk / noise / no-wave), and thinking of that last genre thrown into the mix, this really does sound as aggressively weird now as James Chance & the Contortions would have done almost thirty years ago.