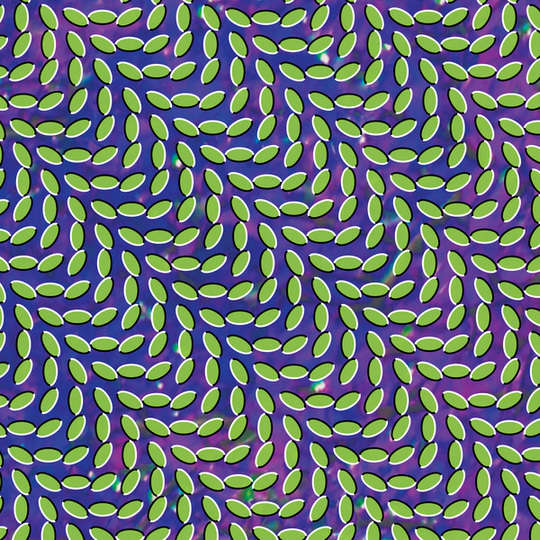 Analysis of the hysteria surrounding Animal Collective's ninth album has become a bit of a cottage industry in itself over DiS's Christmas break, to the extent that rocking up on the day of release with another glowing appraisal seems almost a little quaint. But what the hell, eh? All I can really chime in with here are my own reasons for getting in an advance tizzy about Merriweather Post Pavilion, then follow with some words about how it utterly vindicates the pent up expectation, and then there will be one more gushing review in the world and that will be that.

Despite a typically rapturous reception (including a 10/10 from this here site), I'm not the only one that 2007's Strawberry Jam didn't really do it for. Its intentionally glossy, artificial textures did not gel nicely with Avey Tare's breathless delivery (i.e. he sounded massively smug ), and while Panda Bear's more detached tones fared better, he comprehensively stole his own thunder a few months later with his Person Pitch solo record. Plenty of people still love Strawberry Jam, of course, but plenty don't, and certainly Feels remains better regarded by a long stretch.

So why has Merriweather Post Pavilion come weighted down with practically Obama-ish levels of expectation within the indiesphere? Probably lots of things: 2008 lacked a truly totemic indie record; it's coming out at a super-dead time of year; it has cover art that you can use to send your enemies insane; journalists reporting from playbacks could scarcely have been more delighted if Geologist had shown them definitive proof of an afterlife; and of course right-thinking people are always excited about Animal Collective albums. For me – and I'd guess others - it's about their live shows last year. I caught them once, at Primavera, and all I can really remember of their set was a relentlessly joyful electronic torrent of sound, set to blinding rainbow coloured rave lights. It wasn't Strawberry Jam: The Stageshow, they'd tapped into something else, something new and something better, and Merriweather Post Pavilion is the deafening sound of that something.

This is what happens the first time you listen. You think - of opener 'In The Flowers' – that this is very good, but sounds like it's going to build to something amazing. There is a faint worry that, in an M. Night Shyamalan stylee, the build is actually too good, that there will be no conclusion that does it justice. This is not the case. Two and a half minutes in, and Merriweather Post Pavilion becomes certifiably amazing, and remains so until the very end.

Or to rephrase more specifically, after 'In The Flowers''s first two and half minutes of swirling build - Avey Tare singing with barely restrained wonder about "the dancer who gets wild to the deep revelling rhythm" over arpeggios straining against a euphoric wash of noise - everything just blows up in a way it seems scarcely possible a studio could ever capture. There are gargantuan celebratory drums, spiralling with the rhythmic abandon of a dozen carnivals; there's piercing major key synths, shimmering high, bright and alien as the Northern Lights; there is the most bone-rattlingly awesome subsonic bass ever committed to an indie record; and there's Avey Tare, over-cute affectations abandoned in favour of a hail of joy unbridled, starry eyed yearning for the time "we could be dancing, no more missing you while I am gone". When Panda Bear rather dryly observed in an interview that MPP was the band's "best recorded" album, he was not kidding: there's an absurd amount going on here, much of it incredibly loud, but they pull it off immaculately, a perfectly vivid snapshot of a star going nova.

And it doesn't burn out. Next is 'My Girls', Panda Bear doing his sublime neo-Beach Boys thing over a neon wheel of expectant fairground synths and more insane bass frequencies (that bass never lets up the record over – it's like Animal Collective are demanding you feel every song physically), the words a pure, unquestioning fusillade of love for his wife and daughter. Love is a recurrent theme (as ever), but be it Panda's peons to his family or Avey's to his other half, it's not cutesy cute indie schmindie love: it's a primal outpouring, one loud, happy noise among Merriweather Post Pavilion's radiant arsenal of loud, happy noises.

So there's 'Also Frightened's, treacly, dreamy flow, propelled lazily forward by languorously processed beats that are every so often interrupted by pealing, wordless vocal detonation of happiness from the two singers. There's the utter, out of his gourd giddiness of Avey's 'Summertime Clothes', the singer drunk with the song's thick, heady throb as he declares "I want to walk around with you", over and over. There's 'Daily Routine's madly flailing keys, and overtly mechanistic underbelly, counterbalanced by Panda's absurdly magical description of a trip to take his daughter to school; 'Bluish' is another love-as-colour song from Avey, but while we've heard its like before, here the gossamer gorgeousness blown to superhero proportions with some judicious sprays of psychedelic synth and more of that magical low end.

And it goes on, wave after ecstatic wave until finally wrapping up with 'Brothersport'. A plea from Panda for his sibling to open up after the death of their father, it threatens to build to some sort actual full on, bug out, glowsticks in the air finale, but instead opts not to burn up the record's energies, but ground them the coda refrain "You've got so much inside, let it come right out". It's just perfect, a moment of catharsis you probably didn't even realise the record needed.

Is Merriweather Post Pavilion the flawless album that it's been willed to be? Taken as a whole I'd say it's pretty damn close. Break it down and then some songs clearly stand up better on their own than others – it's unlikely anyone's ever going to put hand on heart and declare 'Lion In A Coma' to be their favourite song of all time. But it's not about breaking it down, or being cerebral, or taking things track by track. It's not about worrying that we're all getting too excited over this album, or even, conversely, worrying if you don't like it. It's about the rush; the rush of life, the rush of electricity, the rush of joy, joy unbounded.