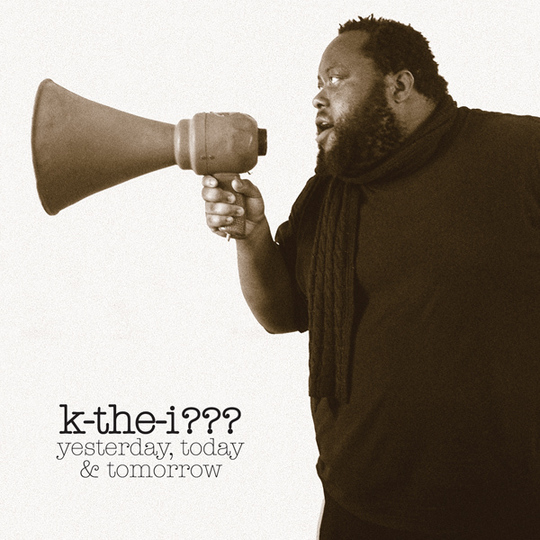 K-the-I??? comes across immediately in exactly the way intended and befitting of his musical persona – confrontational, rendered with loving detail and, above all, literate. Of course, it’d be demented to single out literacy as a defining trait, but the succinct deliveries fly by in such a manner that it’s difficult to describe it any other way. The opening gunshot buzz of '400 On The BPM' reigns over a very fierce party. Our friend K gets violent when it comes to the beat and cajoling revellers to fucking follow it – he’s not in the business of making anyone feel comfortable. Within the taut exposition resides a candid reference to the devil, a figure that bookends the whole album. The closing 'Man Or Machine' tells us "the devil, she plays to win." It’s a dark fixation that informs the milieu of the whole record.

Indeed, the production (courtesy of Saul Williams collaborator Thavius Beck) owes more to frantic IDM than it does to anything the RZA ever did. The energy in the beats simply never relents, in line with that of K-the-I???. 'Cell-Shaded/Daydreams/Nightmares' seems preoccupied with existence, mulling and musing with little direction until the pivotal line "with every breath I take an earthquake takes place." This line is delivered monotonously, carefully, so the listener has no choice but to prickle. It’s a simple, almost childlike emphasis, but when placed in contrast to the preceding Kerouacian stream of consciousness, its power is exceptional.

Highlights are everywhere on Yesterday, Today & Tomorrow, one has only to pick out the odd line to locate a lyrical gem. "Never trendy Mandy / handy purple people eater / retreat it / leave it to beaver / I didn’t need her either" is purely ridiculous, and even more so when a sort of nucleus is located on 'Lead The Floor': "life is what you make of it you idiot!" Impossible to argue. Near-unstoppable, unbridled, assuredly and righteously disgusted energy seeps across all of these tracks. K-the-I??? makes bold steps alongside the likes of Saul Williams, emanating poetic flamboyance without becoming too confusing, but with enough (e)motion and kinetic verve to satisfy even the most passive ear. With these tidbits, though, who on earth could possibly be passive? Full engagement is mandatory.