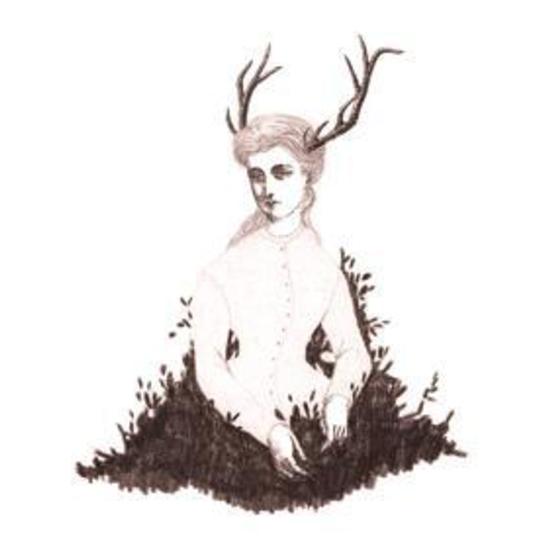 Welcome to Judging an Album by its Cover, 101. Today, we’ll be starting with Micah Blue Smaldone’s 4th solo effort, The Red River. A lady with antlers on the cover; what do we make of that? My first thought is: the theriocephalic figure is traditionally a symbol of Man’s interdependence with Nature, and in modern symbology, post-Darwin, connotations include our suppressed bestiality, our mortality, the Death of God. Plus, this particular image is a palimpsest of signifiers: the “lady” has been traced from a 19th century portrait, and the antlers from a separate source, suggesting a fusion of historical frames. The presence of a stag’s antlers, however, could imply ‘“antennas to the cosmos”’ – a quasi-instinctual sensitivity to the echoes of long-dead voices, undetectable to ordinary humans.

All that, or it could just be the guy really likes Palace Brothers, and Songs:Ohia. The first track bears this out: 'A Guest' is a more sprightly 'Death to Everyone' by Bonnie Prince Billy, but instead of Death as a succubus, or dominatrix, Smaldone depicts Death as the uninvited guest at a feast, who can’t ever be satisfied. This pattern is repeated across the album, with Death as a lover, Death as "bastard Father Time" and so on. Track 3 slows down to a loungey pace that belies the lyrical content: it’s Didn’t it Rain by Songs:Ohia compressed into a few minutes (standing on the bridge between bleak past and uncertain future… the city like a hungry animal… the pale blue light that gives him hope…) When the brass instruments come in, they’re not so manically jaunty as to suggest the reverse mood (as in Smog), or beautifully mournful (as Willard Grant Conspiracy would arrange them). Instead, this is sort of… Nothing; put there to do something different, as you do in this hybrid genre. On the other hand, the final bars of 'A Derelict' show Smaldone capable of evoking a seascape with guitar alone, rather than resorting to reverbed violin, or somesuch. Final track, 'A Drink', sets up a Richard Youngs- or John Fahey-like foundation: a one-chord riff, from which a second electric guitar line (with slight delay) rises periodically; it’s elegant, and points towards a more abstract, late-20th C style, without breaking the mood.

Okay. That was slightly mean, focusing on the cribbings (unconscious or otherwise), especially given that the Press Release indicates Smaldone is keen to let us know he’s a devout student of early 20th century country-blues. Furthermore, this isn’t some hip, ironic appropriation of the past – this music "got him through some bad times." For all the name-checking of old bluesmen, however, this isn’t as "authentic" as Smaldone claims, and is better compared to contemporaries, because genre-hopping and alternation between full-band and solo-arrangements (with overdubs) just weren’t an option before. To compete in the modern marketplace for retro-styles is to be a jack of all trades, and until you’ve at least mastered meaningful juxtapositions of style, you’re a master of... not very much.

This imitativeness isn’t a bad thing, of course; Smaldone’s far more accomplished than most clones of Bill “Smog” Callahan and Will Oldham, and the album’s more listenable than quite a few of their own records. More than any of his (late) influences, Smaldone does indeed sing like Bill and Will, and if he never seems to sing with a lecherous grin, he at least avoids fragility as a default setting to sound like a hobo-sage (take note, Jason “Timesbold” Merritt). The guitar playing is more confident than most of the aforementioned, without being showy on the solos. By comparison with his fellow devotees of the Lomax recordings, Smaldone’s rattling, tumbling, ragtime ballads are engaging rather than just pretty; plus, the narratives are consistently well-realized, albeit that the interpretations are largely closed (yep, this one’s personifying death, and this…). You could even say that Micah Blue Smaldone is One-to-Watch, within the genre; a consolation to anyone who hoped Timesbold would rise above the sum of their own influences, and take alt. country down a new path.

My reservation is: he doesn’t yet have "The Gift" (as in, Lewis Hyde’s theory of artistry). Weaving together influences, and becoming an accomplished player, lets you make a net… and it’s in this net you catch your Gift: that historic theme, or episode from your own unique life experience, or even that new instrument or model of guitar that makes you rethink your approach to songwriting, after you’d become a sensitive receptor to melodies. It’s not far off, but it’s not here yet. So, keep listening. Grow those antlers…