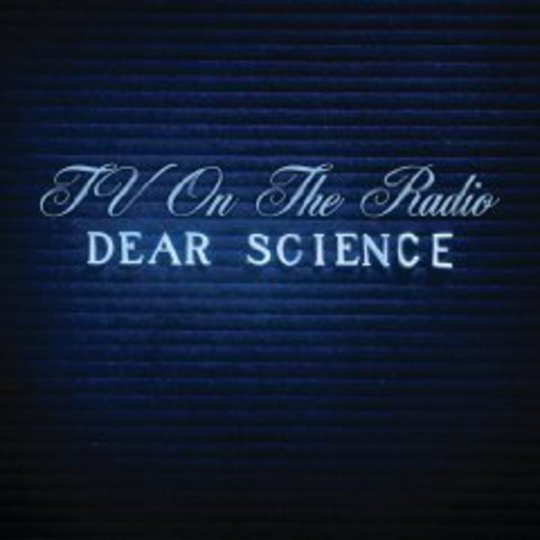 A bombshell: as good as it undoubtedly is, this record isn't going to change your life. Nor will it be considered an OK Computer or a Velvet Underground & Nico in ten years' time. Did it ever promise to be? Some people seemed to think so, and many still might.

TV On The Radio's rapid ascent to somewhere very near mass popularity - a surprise given the often oblique nature of their cultured, soulful art-rock - means that Dear Science has become probably the most hotly anticipated LP of the year. That's all the more troublesome considering the slow-burning nature of what TV On The Radio do (or did). In mainstream terms, it isn't immediately catchy, or particularly anthemic. And 'obvious' is the last thing it is. To evaluate this release on a cursory few listens would be pure folly; even after twenty to thirty, it's tricky. But one thing appears certain: this is the album that will takes its makers to the masses, if only because everybody seems to want to have an opinion on it.

They're definitely getting easier on the ear with every release, and by TVOTR standards, Dear Science - with its frequent forays into pop, funk and soul - is almost brazenly commercial. Compare it side-by-side with their first couple of EPs, for instance. They still had those influences, no doubt, but didn't let them bleed through to the forefront quite as gloriously as this; it's undeniably pop, but pop at its most complex and technically accomplished.

It's also as brilliantly sounding a record as you'd expect from a Sitek production: crisp, almost brittle in places, but with a surprising amount of overall warmth and clarity considering the array of different instruments employed. Antibalas' horns reprise their Antidotes role; that of welcome, sparing accompaniment. It's all cunningly layered, nicely textured, ever so subtle. The sonic maelstrom you can take home to meet the parents, if you will.

Stylistically, it's also one of the most varied records you'll hear all year. Few bands break this many boundaries in a whole career, let alone a single album. One song here, 'Family Tree', could be described as a ballad. Others might belong to a new Prince record, should he continue his pursuit of a futuristic-pop direction ('Golden Age'). And with their varied means of treating and disguising the guitars, Talking Heads also provide a clear reference point. Similarly, at its most frantic, Tunde Adipimbe's rapped delivery ('DLZ', 'Dancing Choose') echoes the likes of Saul Williams.

Indeed, lyrically speaking TV On The Radio are certainly more daring than the majority of their peers. Guitarist Kyp Malone takes an increasingly prominent role in both the writing and delivery on Dear Science, and his vocal partnership with Adipimbe proves itself to be a rich and potent combination, one capable of successfully exploring a number of themes.

The shear breadth of styles, emotions and moods here makes for a sometimes bewildering listen - from anger, passion and lust at one end to loss, regret and depression at the other, Dear Science covers an awful lot of thematic bases over the course of its eleven songs. As a result, on casual listens it can feel more like a disparate, disjointed collection of tracks than a coherent body of work. That's a tiny beef, though, when there's nary a weak track here. Overall, it's an unqualified success.

Back to that opening assertion, then, which of course rings true for 99% of albums released on the back of such an enormous wave of hype: whether Dear Science stands the test of time like classic records must is impossible to predict right now, but, at this moment in time, it's sounding like one of the albums of the year, and its makers' latest, greatest masterpiece.