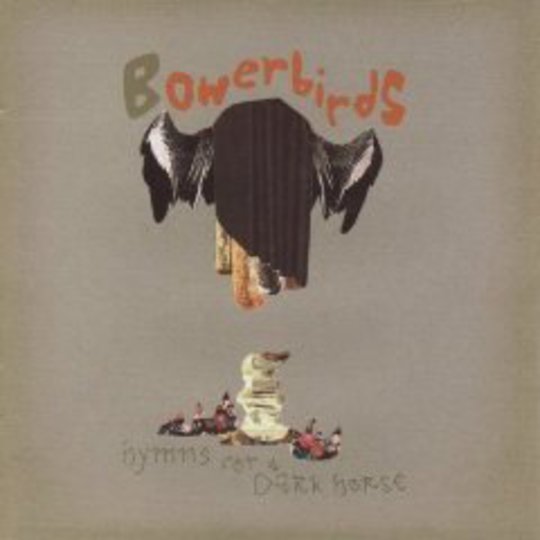 Emerging from its Atlantic Ocean hibernation a good year after it was released to rapturous acclaim stateside, Raleigh, North Carolina trio Bowerbirds’ debut LP is the sort of slow-release indie-folk almost-masterpiece that seems anything but the first few times through. So very slight are most of the arrangements collected here that unless attentions are finely tuned words and melodies that – later – will enrapture merely drift into the ether between a semblance of appreciation and the shrug of indifference.

So try again you should, and try harder. Hymns For A Dark Horse is so seeped in expressive emotions entirely melancholic that it’s a wonder it never sinks to the bottom of speaker cones and rests there, defeated, like a carrack turned too tightly mid-battle with its cannon ports open to the elements; in the words of Phil Moore, or more pertinently in the silences between what he has to say, there is unrest, distress, discomfort. The band’s three voices come together quite beautifully on more than many an occasion, but still elevation is hindered by overtones truly marked by a level of aural dysphoria comparable with the not-so-Bonnie ‘Prince’ at his lowest ebb.

It’s accordion player Beth Tacular who gives Hymns… the light necessary to combat the encroaching shade and gloom beyond; on opener ‘Hooves’ her contributions lift a dourly strummed acoustic, lamental vocal line and background hum of nothing whatsoever – you know, that kind of silence that seems to resonate weirdly vividly – up from the depths of desolation to a place where the spurned can again feel the sun on their faces. She repeats the feat time and again, colouring beyond the song lines and blurring visions of starkness into watery washes of enveloping tones and textures. At times the effect is as euphoric as the best of Sufjan Stevens’ seminal Illinois.

As rural-residing folks, Bowerbirds’ themes and imagery regularly return to nature – such should be evident from the merest modicum of Googling, given their chosen musical moniker – but while song titles like ‘In Our Talons’ and ‘Dark Horse’ may perhaps suggest sentiments expressed courtesy of anthropomorphising the creatures living around the band’s Airstream trailer home (as could the video to the former), connectivity with listener cores comes easily. This is music that, if you’re open to its subtleties, will enrich you deeply and leave a long-lasting impression. It might even tug heartily at your tear ducts if it catches you wholly unawares.

Music as delicate as Bowerbirds’ can’t truly be held up to persistent, pressing scrutiny – it’s too narrow of audience appeal for such punishment to produce worthwhile rewards, anyway, so leave these words knowing this: if you’ve found a dark place of your own that, as yet, lacks a soundtrack to complement its reassuring warmth and relaxing isolation, perhaps Bowerbirds are ready to find you.