The Greenhouse Effect (aka The Greatest Mixtape Ever) 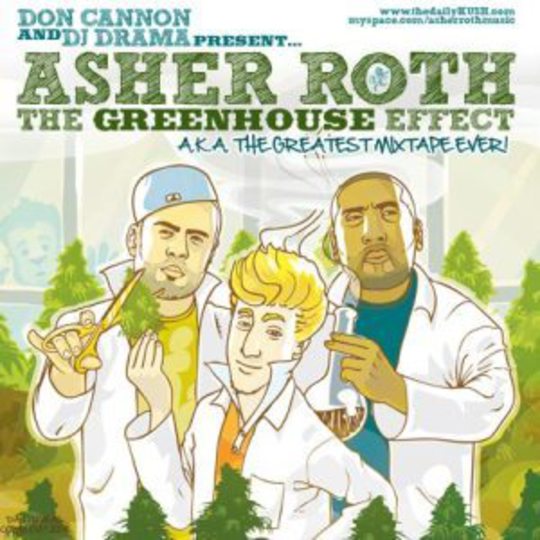 I can only assume that, after his run in with the law last year, DJ Drama had to cut a deal in order to walk free. The DA must have offered him the dropping of all charges if only he’d produce a mixtape for his son, Asher Roth. Alternately, Drama’s decided to surround himself with as many needless white people as possible as some sort of preventative anti-racial profiling move. If so, expect him to start posting to the DiS forums soon.

Whatever the reason, we now have arguably one of the world’s top three mixtape DJs hosting a recording by a man who, as a quick glimpse of a photo would probably lead you to guess, has a touch of the Paul Barmans. Actually, that’s not totally fair: Asher Roth is nowhere near that bad. And while the promo makes all the inevitable Mathers and Beasties comparisons, the A-list rapper Roth quickest brings to mind is Kanye. Both make big play off their non-threatening cockiness, both seem keen to straddle both the mixtape and indie circuits, and both probably could have done with severer beatings as a child. Builds character.

His whole steez is poisoned by the two great failings that whiteboy rappers have had throughout history. Firstly, the Anticon ‘50 syllables in two beats’ illness. Secondly, the nerdcore “Here is my awkwardly shoehorned and vaguely patronising namedrop of a figure you wouldn’t expect to hear mentioned in a song” style. Sometimes he even manages both in one line, like on the Jigga beatjack ‘Roth Boys’ when he says:_ “I murder this / They stargazing like Copernicus”. Later on in the track he tries to claw some ground back with the album’s best line by far, “This is the same thing that happened on _‘Renegade’”, and a shout out to perpetually divorcing pro-wrestling legend and heart attack poster Ric Flair, but by then it’s too late.

The album as a whole treads pretty familiar ground for a debut mixtape that got recorded after a rapper signed to a major label (SRC, the same stomping ground as Akon and the Wu): a whole string of verses over instrumentals in as many hip-hop styles as possible to see what sticks. A lot of it doesn’t work, most obviously on Asher’s attempt to capture some of Clipse’s stoned businessman swagger on a refit of ‘Mr Me 2’, which instead a) makes Asher sound stultifying bored and b) helpfully highlights how utterly fucking pedestrian Clipse’s beats actually are when they’re not doing their coke rap Bert ‘n’ Ernie shtick over them.

He even has a bash at spoken-word poetry, bringing back the ghosts of a thousand redbrick campus bongo owners with lines like, “If my voice didn’t work but my hands could talk / Would you take the time to see what a deaf man thought?”, an Arrested Development-esque moment that rubs up hideously awkwardly with the album’s penultimate track ‘Cartoon Chick’, where our boy discusses the joys of fucking Jessica Rabbit and the chick from _Aladdin, like a somehow even less enjoyable version of Robot Chicken. The album ends with a track based around a John Mayer sample, which I can only imagine is some kind of practical joke Drama’s playing on Roth by not letting him in on the secret that black people are just joking when they say they like Mr ‘Your Body Is A Wonderland’.

It’s not a hateful album by any stretch of the imagination, it’s just weak. Roth never convinces as either a lyricist or a deliverer, and seemingly doesn’t have a clue as to what his style is going to be other than ‘melanin-deficient rapper du jour’. It’s a shame when folks throw away a perfectly good whiteboy like that.