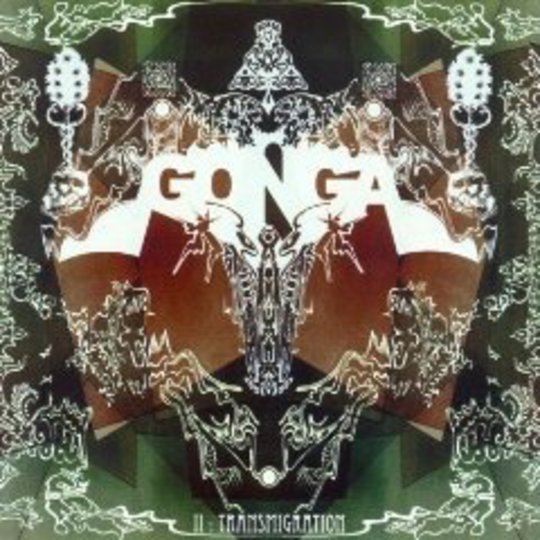 Album two from Bristol rockers Gonga (after their self-titled debut) is a low-end-heavy beast, all throbbing bass lines and purposefully lackadaisical vocals. To some ears it’ll stir thoughts of Queens Of The Stone Age with an Alice In Chains edge, and such an impression isn’t so inaccurate: Transmigration is an echo of a period of rock – post-grunge but well short in spirit of today’s freak-cum-psyche revivalists – that’s rarely given a moment’s pondering by shelf-browsing consumers these days.

Some’ll rack it beside doom stalwarts, but Gonga’s grind isn’t entirely without flashes of light, aspects of easy accessibility – there’s a laid-back stoner vibe to tracks like ‘Sandstorm’ and ‘Wytch Hand’ that’ll set heads to nod from a stadium’s width away, and overtones of prog across the eight tracks proper – a minute-long interlude, ‘The Room Of Unhallowed Rites & Alchemies’, serves as a ‘turn to side b’ reminder at the record’s midpoint. It’s a witch’s cauldron brew of influences spooned out onto a platter, amplifiers plugged straight into the gloop and the resulting cacophony captured by sleek microphones. As it happens, wholly organic.

The production is crisp and punchy throughout, ensuring that newcomers to the band’s heads-down groove aren’t left cold by ill-telegraphed chord changes and drum runs; rather, the pieces of Gonga’s puzzle slot neatly together, and although ‘The Greaser’ and ‘Knight Thyme’ could be by different bands (albeit ones raised on the headiest of out-there rock), songs seem to find a comfortable fit when taken in the context of the overall album. Excitement isn’t consistent – with music like this, you often need to be in the right state of mind to get the best from it – but highs outnumber the lows… save for the lows that are actually highs, if you get me.

Band plays loud; you push your hair over your face and bounce it ‘til your neck’s sore. Done.