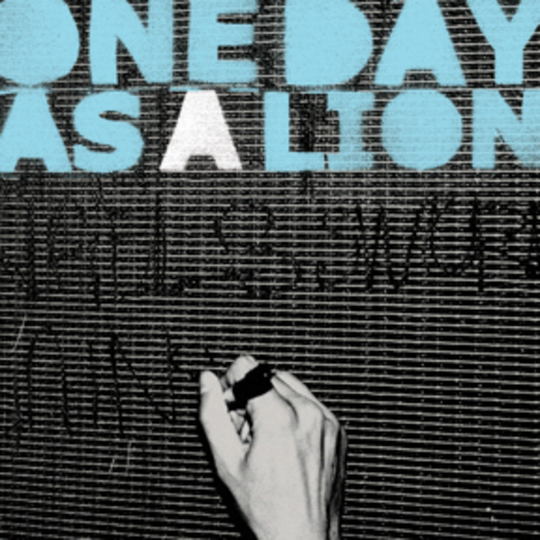 While it’s nostalgically pleasing to hear the reformed Rage Against The Machine repeat their politicised aggro-mantras before festival crowds the world over, there’s no doubt the once-revered funk-rockers’ star has dulled significantly since their fiery parting LP proper (discounting their posthumous covers record, Renegades), 1999’s The Battle Of Los Angeles. They might be picking up the bucks for wheeling out familiar friends on massive outdoor stages, but where’re the revolutions anew?

With no new Rage tracks likely to ever surface – guitarist Tom Morello has said that the band’s old material still feels fresh enough to be relevant today, so there’s no need to pen new songs – attentions turn to ‘side’-projects. Morello records and performs solo as The Nightwatchman, all of Rage except their bouncy vocalist Zack de la Rocha have toured widely as Audioslave, with ex-Soundgarden crooner Chris Cornell on vocals, and now we have One Day As A Lion.

A completely different beast to the records released by Audioslave, this self-titled debut EP from de la Rocha and former Mars Volta man Jon Theodore seems to serve as the closest thing we’ll get to the long-rumoured (but never realised) Zack rap record, mixing as it does crunching power chords and insistent percussion with metallic production echoing Saul Williams’ very best tracks without getting too dälek for mainstream acceptance. Indeed, Williams and de la Rocha have a history, with the latter originally due to appear on the former’s debut LP back in 2001 (a sample was the compromise), and finally showing on Williams’ self-titled sophomore in 2004.

‘Wild International’ kicks off the EP with a louder-than-expected echo of Rage at their most agitated and instrumentally menacing, with deep and rumbling bass tones taking centre stage; de la Rocha’s lyrical flow has smoothed over the years, the tangible anger in his voice stripped back to allow a clarity of vocal intent and purpose to shine through, so every syllable hits as hard as it possibly can. The song is – as even the wettest Rage newcomer could predict – absolutely rooted inspirationally in political misadventures and the subsequent repercussions, most obviously referencing the conflict in Iraq: “in the desert full of bullets, let your body rot”. The world around de la Rocha has changed since he screamed home that anger is a gift, but nothing’s got any better, progression stifled by the same dinosaurs holding all the power.

Given Theodore’s presence you’d expect the percussion to be spot-on, and it certainly is: pounded skins drive ‘Ocean View’ through its four minutes of blustering rap-rock, and rolling fills and dramatic cymbal crashes lift ‘If You Fear Dying’ high above what the song otherwise could’ve been, namely another ‘make the change before it’s too late’ message dressed loosely in a rock smock, the sort of thing that’d comprise filler material on a Rage LP. It’s the one track of five here that doesn’t really impress; or, rather, it does, but the company it keeps is pretty high of standard.

The second-best named-after-the-band track released this year, after Let’s Wrestle’s ‘Let’s Wrestle’ obviously, closes the EP with a dizzying sucker punch; here the project’s hip-hop ambitions seem to reach their zenith, as de la Rocha matches his chosen cadence to rippling, muscular bass and Theodore’s beat-perfect drum work. A minute from home the song splits into two and those drums rise louder in the mix while our mouthpiece ups his ante considerably: “When our cubs grow, we’ll show you what war is good for”. To some such lyrical content will seem hackneyed given our vocalising protagonist’s previous, but there’s true commitment in the delivery, an honesty that shouts louder and clearer than however many run-throughs of ‘Killing In The Name’.

Old-school admirers of Rage left saddened by the stadium-appeasing cock-rock tendencies of Audioslave will find One Day As A Lion inspiring them to dig out Evil Empire once more. It’s a five-tracker with bite, with venom; it’s a reminder that while de la Rocha might age like the rest of us, the fires in his belly haven’t come close to being doused by mundane revivals of his most famous group’s mosh-happy hits. Fuck you, _he_ won’t do what you tell him… and the result is a record that showcases again a voice of empowerment that’s going hoarse no time soon.