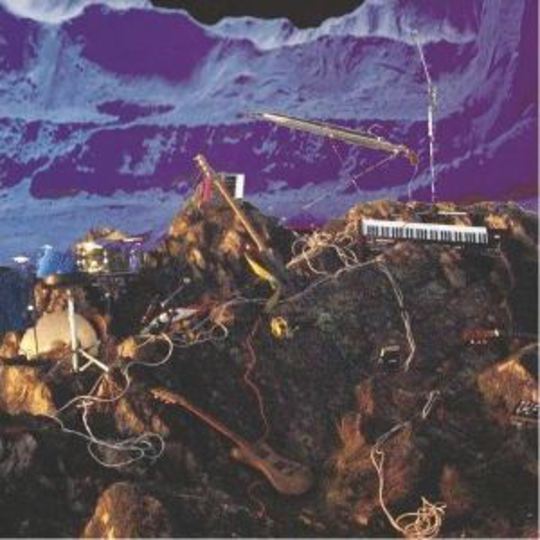 For every word you read below, consider it signifying one I am eating after, basically, assuming Late Of The Pier’s debut album would be a predictable post-nu-rave collection of bleeped-up synth-rock and sub-par screamo vocals.

And I don’t really know why I ever figured that would be its pigeonhole of best fit – perhaps because I initially came to Fantasy Black Channel thinking that it couldn’t be 12 songs as great as the superlative ‘Bathroom Gurgle’; that the youthful Castle Donington four-piece would have loaded almost all their eggs into that basket, keeping a few aside for the re-release of the also-pretty-ace ‘Space And The Woods’ single, and hit auto-pilot for the remainder of their tiresome filler-dripping debut. Wrong.

Sure, there’s a degree of debt owed to Klaxons and their breakthrough debut album – Late Of The Pier are colourful sorts visually and, more pertinently, aurally – but much like the Mercury winners there’s much more to this record than initially meets the ear. And much of that much more is rooted in a decade barely remembered, if at all, by the record’s makers. And the one before it, come to think of it.

Explained: ‘Whitesnake’ breaks into a canter that’s entirely reminiscent of Sparks tackling an Adam & the Ants classic; the aforementioned ‘Space And The Woods’ pitches Interpol-like vocals of purest nonchalance against a synthy backdrop that’s totally Tubeway Army; and ‘Heartbeat’ lifts the bassline intro from ‘Dead Souls’ and uses it to lead listeners into a dizzying indie-disco classic. The kids might be just that, kids, but their minds are tuned to the sounds of their parents’ record collections.

When they’re not sucking on the teats of the Mael brothers and gently cupping the balls of Numan, Late Of The Pier do a neat impersonation of Muse getting into the Justice swing of electro things – listen to ‘Focker’ and try not to break into a sweat – and set about terrifying those of us with the barest modicum of musical taste with suicide-inviting song titles like ‘The Enemy Are The Future’ (which is, since you asked, a deftly throbbing dance number in a roughly similar vein to a dirtied-up Chromeo stripped of Dave 1’s involvement and given the once over by Prince; that, or like Crystal Castles if the hugely overrated Canadians could write their own songs). So they balance the future-modern against the anything-but-mundane revivalist, and they do it well. But is there any coherency to proceedings?

The album ultimately plays like a collection of could-be greatest hits rather than a single, smooth-flowing record, but perhaps that’s the point: what Late Of The Pier have showcased through their singles to date is an alarmingly commendable lack of focus, by which I mean they never explore one direction to its fullest extent before diverting off on another course entirely. It’s this free spiritedness that courses through this album’s veins, and it makes it an invigorating listen. This is a band completely unafraid to do whatever they like, and it’s not beyond the realms of possibility that their label has simply left them to their own devices throughout the gestation of Fantasy Black Channel. If that’s the case, I want to meet their A&R guy right away and shake his hand.

A parting compliment must be made the way of producer Erol Alkan, who has done a good job of giving the band’s more electro-heavy tracks real weight and substance – often when an ‘indie’-by-design band plays the dance game their material sounds weak, but not here. The four-piece succeed in almost every aspect on this debut, and as a result it must surely be acknowledged as one of Britain’s best of the year. What’s most exciting is, like Liars before them and Rolo Tomassi to come, you get the impression from this record that, however well it performs critically and commercially, the band could well scrap the format and build another from scratch.

Chances are what they come up with next, whatever its shape and style, will be just as brilliantly singular of execution and arrangement. They might borrow from forefathers to lay solid foundations, but Late Of The Pier have proven, with Fantasy Black Channel, that they’re a band with ability well beyond the simple sum of influential parts.