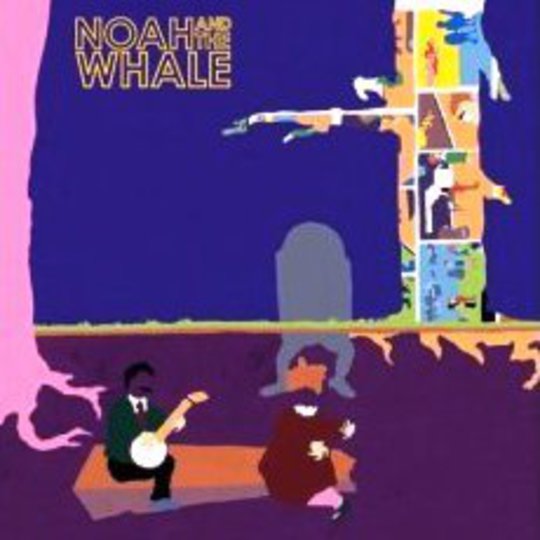 Music like that crafted – and it is crafted, not sculpted at random, process of elimination-style, but tenderly assembled by caring hands – by London foursome Noah & The Whale’s often leaves me split: sometimes it connects, the emotional weight threatening to snap clean the weak compositional shoulders of such subtlety-strummed folk delicateness washing into my heart like a cracked-opened canal lock; at other times I can’t hear past the meandering musicianship, mundane enough to mask the tenderness that emanates from the lyrics that obviously should be soaked up prior to critical assessment, but can’t be as so many basic compositional progressions dull the senses.

Peaceful, The World Lays Me Down is a sweet record – that much is evident without properly assimilating its constituent pieces for assessment purposes. The instrumentation remains slight throughout, allowing frontman Charlie Fink to dominate proceedings. There’s melancholy in his voice, persistent and enveloping, like the creeping darkness that rolls down hillsides come sunset; when it crosses your path you’re not moved, physically, but something changes within you. That tiny shudder: some days pleasurable, others a notice to seek shelter. Fink’s transference of written-word musings to spoken (and he often seems to be speaking, rather than singing in any typical fashion) conveyances is sound, and while he’s not got the best voice you’ll hear in folk circles, his affords the band’s debut album necessary character, its singular charm. Without Fink up front, much of this material would pass the listener by, no echoes remaining once each track has run its course. It could easily be summarised as humdrum.

With Fink firmly settled in the frontman role, Noah & The Whale’s star can ascend, if not into the stratosphere then at least as high as the tallest trees surrounding the campfire one can imagine these songs being played around. The foundations of a rock-solid career are already in place, the single ‘Five Years Time’ breaking the domestic singles chart top ten; when this album cruises into the album top 40 it’s deserved, as Peaceful… possesses highs enough to warrant a place amongst the nation’s best-sellers, at least for a week or two. ‘Do What I Do’ crackles like an aged record, yet in the echo of Fink’s vocal lies ache of a timeless variety, that sadness that seems to dominate so much of the dimensionality of the delivery as tangible as the pompousness that bleeds from your average U2 record. The song reminds one of Angels Of Light, only written from the perspective of a younger, more optimistic mindset. Fink sighs wearily, as if charged with righting the wrongs of too many millions to ever succeed.

‘Rocks And Daggers’ finds a fiddle driving the narrative, and one of many female vocal contributions – whether or not it’s Laura Marling isn’t clear, but the band’s relationship with the Mercury nominee would suggest it certainly could be (note: the press release doesn’t clear this up, nor does Wikipedia offer any answer) – fleshes an otherwise skeletal arrangement into a rather more solid offering. ‘Shape Of My Heart’ – a neat borrowing of the gypsy-isms of Beirut bonded with the colourful wordplay of The Wave Pictures – also sees a female backing vocal run side by side with Fink’s, and the result is a horn-assisted track of soaring splendour, a real hair-raiser capable of sending tingles to the fingertips. But consistency is not maintained, and certain moments of Peaceful… fall by the wayside as attentions are grabbed by the album’s strongest cuts.

These weaker, less-well-realised tracks leave the impression that Peaceful… is an album that shouldn’t be seen as the zenith of its makers’ ambitions, but rather a step in the right direction. With major label backing it’ll be interesting to see how Noah & The Whale react to any commercial slide, or rather how those holding the end of their reins respond to any downturn in mainstream fortunes – there are not three or four more ‘Five Years Time’s here. That said, the band’s current single’s success can’t have been forecast – it’s too left of centre, in a mainstream sense, for its eventual achievements to be assured prior to release. Luck, then, must be on the side of Fink and his companions, so while only some of this debut truly has me enraptured, I’d never bet against it reaching out to thousands who feel differently.

If your heart’s swollen enough to accommodate the poetic elegance of this album’s very best offerings, then Peaceful… will lay long in your CD tray, its harmonic highs certain to sing themselves around your head for weeks and months. However, those who’ve already fallen for the charms of acts like Bowerbirds, Akron/Family and any of the acts of reference noted above may find the record’s slight and frail form a little too awkwardly brittle to handle. It requires TLC, and some listeners – and I count myself among them – are just too heavy-handed to stay in its company long.