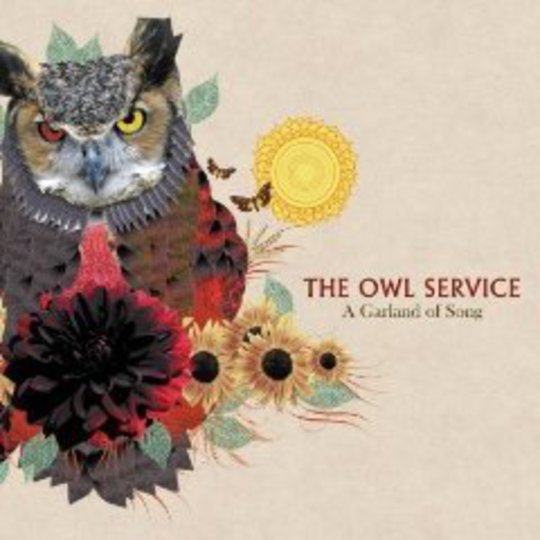 The ‘60s are an alluring time to look back on. An era when it still seemed possible to genuinely exist outside the ‘industry’, to make aesthetically conventional music that still seemed ‘other’. Or at least perhaps that’s what it feels like looking back. Certainly for folk music at least it was an unrivalled period of creative fertility, with artists as diverse as Sandy Denny, Anne Briggs, Vashti Bunyan, Nic Jones and Dick Gaughan all creating innovative, beautiful, faintly rebellious music in an earnest, innocent manner that would appear to be out of reach in today’s über-cynical music industry.

It’s no wonder then that a modern folk-act like The Owl Service would look to hark back heavily to that era, as free and exciting as it now seems. Indeed, as the opening line of the press release brazenly states, Steven Collins formed the act in order to explore his love of the British folk revival. The first track of A Garland of Song, the group’s debut album, even has the bracketed subtitle ‘Folk Revival’ – it’s pretty clear what to expect.

Having said that, the group, led by the suitably ethereal vocals of Jo Lepine and Diane Collier, pull off their own interpretation of the music of the era with creditable élan. The title-track and opener has a pleasingly summery jaunt about it, in a Fairport Convention sort of way; ‘The Dorset Hanging Oak’ manages to pull off the sort of Wicker Man-esque menace in way that tamer acts like Tunng never could. Indeed, throughout the album there’s a subtle, unsettling undertone that sits well alongside the more upbeat numbers, like the confident, conventional, ‘Apple Tree Man’.

Where A Garland of Song starts to grate, however, is in its almost complete subservience to the music of that era. Although a worthy attempt to replicate the almost magical quality of the music made by the likes of Shirley Collins, ultimately what made Collins et al so appealing was their complete normality – Collins and Briggs never had particularly great or forcibly ‘ethereal’ voices, yet it was precisely this ‘realism’ made their music so strangely compelling: the cover of the Collins staple _ ‘Turpin Hero’_ comes across as a little too mannered an attempt to replicate that quality. Album closer _ ‘Flanders Shore’_ comes far closer to achieving the sad, plaintive beauty of the music made by the folk pioneers of 40 years ago.

As impressive and assured a debut record as this is, one suspects that the best way The Owl Service could pay homage to their heroes would be to better marry the present with the past, to find their own voice, as those before them did so effectively.