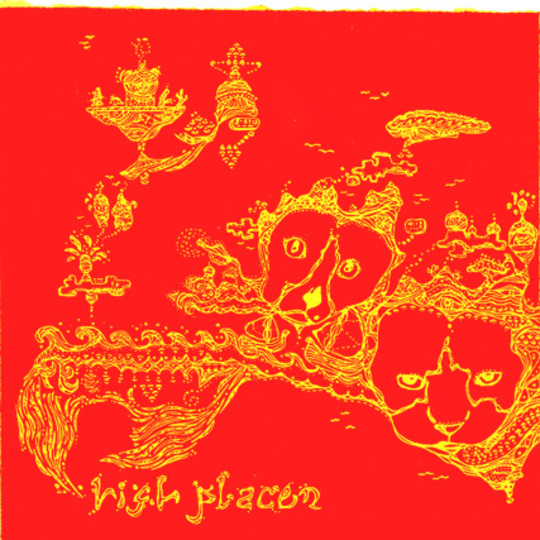 Some banana slugs. Lucky seagulls’ wings. One dusty canary. A little duck rescued from a desert, somewhere, that can’t remember his name. A worn compendium of dinosaurs stood on its spine with the pages splayed, so that the Iguanodons’ place at the table isn’t at the expense of the Tyrannosaurus Rex (who tends to accumulate grudges over such things). Call the dog in from his slumber spot out in the courtyard but point a finger and warn him he’s not to mouth the other guests, even if the platter of felt eggs and invisible tea proves insubstantial. Make room for the monkey’s son who lives next door, some plastic palm trees and open the curtains to clouds of drowning deer, ‘Greeting the Light’ like a pink lens on the eye of the sun. All assembled? And so 03/07 – 09/07 begins, a hazy, half-remembered daydream of exotica and island music that starts in the mind of a bored child and ends in the glorious union outlined above, conjured from the names and lyrics given to High Places’ teetering demo collection. They are a Brooklyn band of worldly concerns and they fucking love animals.

There’s a good chance that Mary Pearson and Robert Barber have already been called to your attention. Since 03/07 – 09/07 found its way onto eMusic last year the duo have been met with a drizzle of high praise from the likes of Pitchfork, Stereogum, The Fader and DrownedinSound itself, their blend of cracked rhythm, broken drone and found sound appealing to critics who’d usually recoil sneering at songs called ‘Granola’. Yes – these are the towering hurdles they’ve had to overcome. But overcome they have, reaching in through sceptical ears to slowly knot daisy chains ‘round the hearts of lonely men and their illogically aggressive opinions on pop music in a fashion somewhat akin to that YouTube video with the two hairy lads and the lion.

It’s hard to tell whether High Places’ fascination with the earth and its inhabitants results in a desperate striving for some inner idyll beyond the reach of the city’s festering hubbub or if it’s simply a case of them rolling a spliff and going to the zoo. What's certain is they wouldn’t have much joy pushing either if their product wasn’t cut so neat. Much of what’s here sparkles with the promise of a cold can of Rubicon. (Do they match the colour of the can to the taste, or the taste to the colour? Whatever, awesome job.) Extended opener ‘Head Spins Head Spins’ rolls in on tides of fizzing Guanabana as Pearson’s docile vocal is not so much introduced to the listener as left peering out from behind Barber’s cords. That’s where the singer stays for the duration of the record, buried in with the rest of the mix while her gentleman caller makes small talk with burbling synths and tickled pans.

Throughout, there seems to be a desire to blend in with the background, as the environment is channelled direct – water laps, Pearson’s voice sings back at her from the walls of caves and canyons and I could swear the inlay’s missing a credit for the percussive work of lean-legged crickets. It’s not as blatant as when Martin Denny starts chattering like a chimp or confusing tropical avians with his manic crowing, but it is there and besides, nothing apart from a fond regard for wildlife is blatant with High Places. Most of the arrangements recall the barely-there shimmer and snap of Villalobos’s sunny minimalism as much as they do the likes of Abe Vigoda, El Guincho, The Ruby Suns; the more obvious contemporaries. Saying that though, there is a feeling throughout of being splattered with the last, precious splashes of drone from Feels (that desert duck could have been ‘Daffy…’) and High Places could quite easily number among ‘Reverend Green’’s “thousand wasted Brooklyners” or those kids on the front of the Panda Bear record. Pearson manoeuvres her animal collection with wistful wrists, toying with imagery like a lonely girl in a Tennessee Williams script, a menagerie of souvenirs and memories of brilliant birds trapped in glass sun shakers. I only hint so half-heart at influences because 03/07 – 09/07 never does anything more than drop hints itself. The release of a self-titled debut album proper in September may provide more conclusive answers.

Chances are though that it’ll seem and sound much like this record does – recorded in isolation, often to the extent that you imagine a crack team of industrious critters crawling into Pearson’s head as she dozes, setting up a studio, mics recording to reel straight from the subconscious. Awestruck fragments of spiel float through the glimmer of ‘Universe’, gambits of conversation from time ago or still to come, maybe, pondering what it must be like for a “baby in this place” (that place being mother Earth, of course). If it all sounds a touch too whimsy when broken down to its constituents that’s because at times it is – often Pearson and Barber will meander off into what seem like musical dead-ends, attempting to hold ears with the most minimal of transitions over the course of three or four minutes. But for every ‘Shared Islands’ or ‘Freaked Flight’ there’s a ‘Sandy Feat’ or ‘Jump In_’, songs that pour attention back from empty bucket into pools of Sunkist pop.

And even when 03/07 – 09/07 seems too cute or too pussy it’s still kind of heartening. Sincere environmentalism isn’t the sort of thing the ironic, narcissistic hipster hordes usually go for, so High Places must be doing something right, right? As it is they’ll probably be revered in a few decades time, when environmentalism is all but extinct because there’s no environment, really, left to protect and it becomes a fashionably odd eccentric tick firing the progeny of British Sea Power and giving noble purpose to taxidermists. Yes, when the ice caps have bled all they can and the polar bears are swimming in the sinking remnants of their own species High Places’ exotica will take on an even more other-worldly resonance. Even today it sounds distant, extrasensory, washing-out with the creeping tide and the stains on a fraying beach towel.