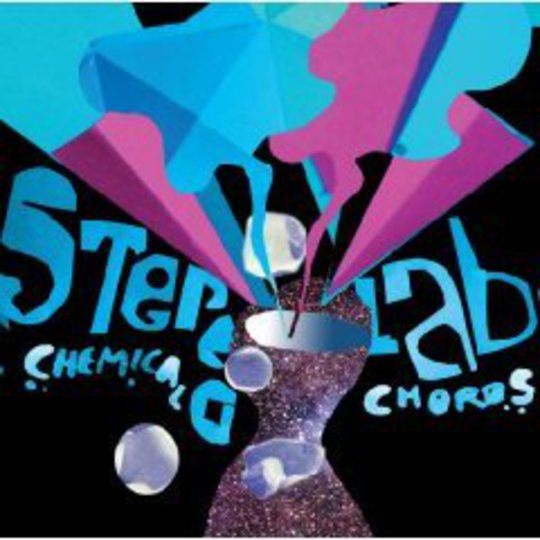 There has always been an element of calculation with the music of Stereolab, and a title like Chemical Chords seems completely apt. This is not calculation in a “we don’t really mean this music, we’re smug nerds with Moogs” sort of fashion, more “we’ve worked hard on every note of this record, we know where each and every nuance is because we bled it”. The hard work, the preparation and, yes, the calculation has been totally worth it. Chemical Chords is an apt title.

Most of these songs were, according to Tim Gane, the result of elaboration and augmentation on simple chord progressions he came up with in a rather short space of time. Consequently, there’s an urgency to Stereolab that we haven’t heard for some time. It would be wrong to say that they’ve turned it up to eleven, that they sound as if they’re rocking out; but there’s a definite compact aspect to everything assembled here. Though there isn’t a great deal of musical space, the ways in which the band have made these simple cells into a functioning organism is wonderful.

The welcome return of Sean O’Hagan to the ‘Lab fold will delight many, his string and brass arrangements running lithely through the whole record in a manner not so dominant as to overpower the simplicity of the foundations, but quirky enough to merit repeated examinations. The alternating, chorusing strings and horns on ‘The Ecstatic Static’ are particularly hopeful, and similarly their exposition on ‘Self Portrait With “Electric Brain”’ are pure charms and honky brilliance - mind the flutes over the top, they are top. So the whole thing is seamless, apparently, every song a minor miracle of dolled-up intelligence with no filler at all.

What one might think, though, is that this is territory covered in much better manners before, and that’s by no means a foolish thing to think. Look at Brian Wilson - his chord progressions were much more complex than those assembled here, and so were the augmentations that extended them and gave them more life. Chemical Chords in comparison sounds like a slightly leaden debt to some moments on Pet Sounds, but to focus on that would be a gross missing of the point. The best way to explain this might be to equate symphonic pop to eating a chilli and to equate this record with eating a trifle.

Take a big mouthful of that chilli and flavours zing across your palate with maximum impact. Music is by turns at its most elaborate in construction but most brazen in the desired effect - massive emotional reaction. Maybe break for a sorbet, but then go right ahead and take a similarly big mouthful of that trifle. Intricacies are smaller in their distinction from the overriding flavour, and you’d be better off nibbling at it and letting the different layers come at you gradually. Chemical Chords is subtle and contains an easy charm throughout that, like a lot of previous Stereolab material, can lead one to miss things the first time through. You have to go back gradually and keep biting through the different layers. So it is, occasionally, wearing to go through this battle. _Do_ go through it, though.

Importantly, they haven’t lost any ability in nailing the toe-tappers, the ones that light up their now incredibly impressive live sets. Opener ‘Neon Beanbag’ is set to become a stage regular, all Yo La Tengo shuffles and cheeky trombone, but with enough circulatory energy and melodic intrigue to make it work on record too. Though wrongly grandiose in its title, ‘One Note Symphony’ (perhaps a nod to that staple of Latin collections the world over, ‘Una Nota De Samba’) is premium slink in the way that only Stereolab tend to express themselves, with sexy chromatic lines falling down onto more of those delicious horn arrangements. For such a direct album, they’ve crammed in an awful lot.

While it doesn’t touch on the epic dimensions Stereolab have proved themselves capable of, Chemical Chords is still substantially satisfying. That they’ve somewhat restricted themselves in the way the record was constructed is also, oddly, a very good thing because it’s allowed them to strain and work within a framework and yield excellent results. It’s not going to be to everyone’s taste, maybe not even for Stereolab fans, but keep going back to it and the benefits will lodge themselves into your soaking brain.