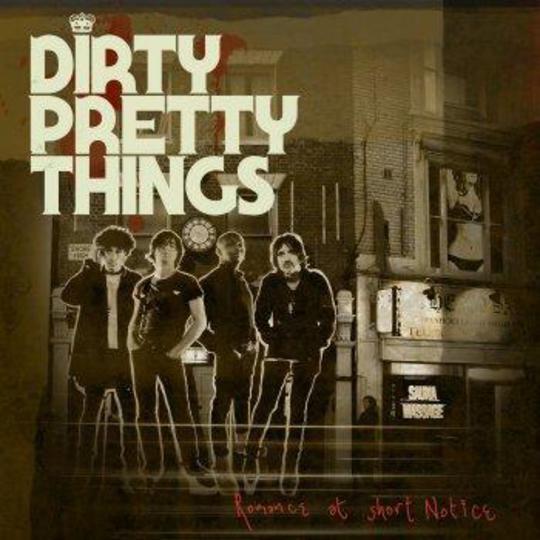 Dirty Pretty Things frontman Carl Barât has a brilliant album in him. He’s not written or recorded it yet, but the songwriting powerhouse behind the success of The Libertines, where he shared the spotlight with since-hogged-it celebrity smackface Pete Doherty, is capable of penning affecting paeans to modernity’s various minutia, vignettes focusing on aspects of the everyday that connect with their audience at angles that aren’t at all contrived or clichéd.

Romance At Short Notice half impresses, reassuring the likes of this critic that yes, Barât can be brilliant when the mood takes hold, when inspiration truly strikes. That’s not inspiration in any instrumental sense – Dirty Pretty Things can be celebrated elsewhere for a selection of selling points, but arrangements beyond the purely bog-standard verse-chorus-verse dynamic are beyond this four-piece – but of a lyrical nature. Here, on his band’s second long-player, Barât sets his sights on dissecting the fickleness of the scene he’s played a part in the establishment of, the fashion-over-feelings hysterics of flailing musical youths spilling onto the streets of east London. And this is the opener, the boisterous ‘Buzzards and Crows’. Stall, set.

‘Kicks of Consumption’ examines the fleeting nature of relationships birthed and mourned within the music industry and its satellite concerns – “After a month our friendship waned, as you’re ambitious to a fault” – setting its tales of fallings out to a punchy and jaunty beat from drummer Gary Powell; also a former Libertine, Powell must be praised for his consistently accomplished contributions across Romance At Short Notice. ‘Chinese Dogs’ seems throwaway at first, but given a second time around its braggadocio-spilling attitude and swagger seems rather tongue-in-cheek: “What’d it take for me to be your man?” asks Barât with a rasp in his tongue, part Rotten, part Strummer. Two idols, no doubt, whose work Barât would love bands of his own to emulate – not commercially, but certainly critically.

Unfortunately, and despite a handful of enjoyable numbers amongst its 12-track whole, Romance At Short Notice doesn’t entirely deliver; Barât can charm, but sometimes his delivery resonates with a cockiness too cloying, and for every delightful surprise – ‘The North’ is a delicately realised treasure of subtle strings and whispered vocals – there’s an ill-advised blast of amplification over ability. Lead single ‘Tired Of England’ is the sort of nostalgia-informed dross that would have been laughed at had it appeared as a Libertines b-side – “From Clerkenwell into the city,” sings our tour guide, really expanding his exploration into the boroughs – and ‘Hippy’s Son’ finds Barât’s angry-man persona ranting to deaf ears.

Fans of Dirty Pretty Things’ debut, Waterloo To Anywhere (review), may feel that their indie-pop combo of choice have developed in the past two years, and to an extent they’d be correct: Barât is gradually laying the ghost of his influential past to bed, grinding out a groove of his own without that cerub-faced addict spoiling the party. Enough signs are pointing in the right direction, but Romance At Short Notice isn’t brave enough to follow each road to its end. If the highs of its preceding pair are analysed and absorbed again, and left to mature, album three could be brilliant. Until then, the band’s fanbase rests placated but undernourished.