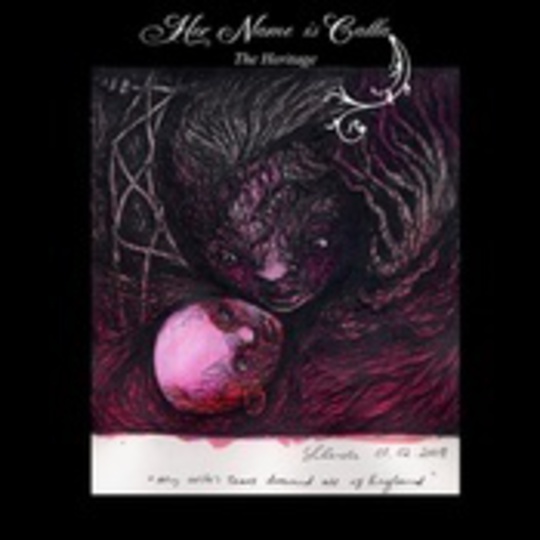 Anyone fortunate enough to have got their hands on a copy of either of Her Name Is Calla's last two singles will already be aware that these guys don't conform to any specific rules regarding structure, genre or even what constitutes the basic principles of a song in general.

What you get, as seen in their live shows, is a semi-improvised creation which could start and finish at any point, or just simply carry on until even eternity gets sleepy-eyed.

The story behind The Heritage is a simple one: initially planned as a two-track single ('Nylon' and 'New England'), the sessions overran to the point where both band and record label thought it would be a shame to scrap two-thirds of what was produced. So the pressing plant were given instructions to add three inches of vinyl and four more pieces of music onto the initially proposed product, and The Heritage EP was born. Not that it's all been plain sailing, of course.

During recording, Her Name Is Calla lost a member; they had to get new drummer Adam Weikert up to speed swiftly. Subsequently several overseas distributors have since refused to touch The Heritage, deeming it "too dark and depressing" for the comfort zones of their everyday markets.

As with their previous two releases ('Condor And River' and 'A Moment Of Clarity'), HNIC are aided and abetted here by a host of friends and acquaintances including cellist David Dhonau, The Rosie Taylor Project's Sophie Barnes on trumpet plus Nicole and Rhiannon of The Monroe Transfer adding classical-sounding strings across the whole EP. What this means is that their sound, already hardly unerringly quiet in its delivery, becomes an emphatic maelstrom for the most parts of The Heritage.

The EP is split into six tracks, or pieces of music, that veer from the slow-building ('Nylon') to the epic song-in-three-parts finale of 'Rebirth'; it’s a collection that epitomises Her Name Is Calla's dynamic and unashamedly experimental persona. 'New England', with its chiming intro and submerged funereal coda, still sounds as chilling here as it does live, while 'Motherfucker! It's Alive And It's Bleeding', which combines elements of all the other five songs here amidst Tom Morris' piercing scream of "We're all over the place", is awash with more ideas than most of their contemporaries put together.

While the sheer uneasiness behind the listening context of The Heritage may not be to everyone's taste, there can be no denying that Her Name Is Calla are one of the most daring, unconventional bands the UK has to offer right now. For that alone we should all be exceedingly thankful.

The Ruby Suns at Barden's Boudoir, Hackney, Tue 27 May