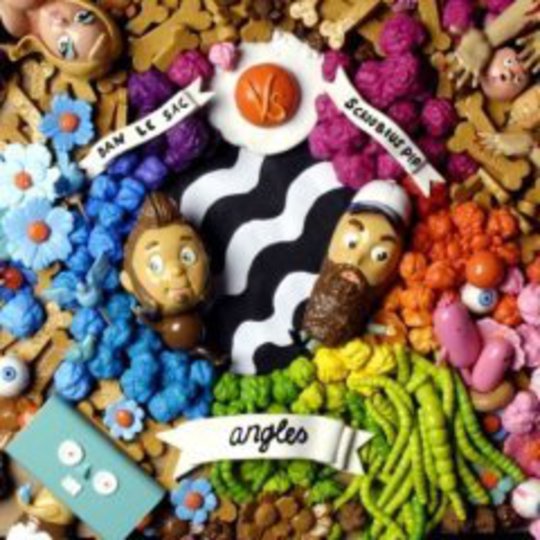 Ironically, considering how they drop precisely zero quotables over Angles,* Dan Le Sac vs Scroobius Pip* are more than capable of coming up with stuff worthy of slapping some quotation marks around in interviews. Indeed, in a Metro article last month one of them said, with straight face, “Sage Francis opened my mind to what hip-hop can be”. Think about that for a second. It’s an amazing statement, so roll it around your tongue for a while. Sage Francis is arguably the first recording artist ever to totally desert the idea of a black audience when recording hip-hop, plugging his stuff to the alt-rock circuit via Epitaph. To DLSvsSP, this represents a brave new dawn for the genre. Some would call that racially awkward. All I’m gonna say is that these two guys make rap music like they’ve been forced into recording it at gunpoint.

They obviously don’t care for, or care to engage with, rap music. Most people are gonna be aware of them solely from their novelty hit of last year, ‘Thou Shalt Always Kill’, a list song that was presumably meant to serve as John Cooper Clarke for the MySpace generation, but sounded more like Barenaked Ladies for the Old Blue Last crowd.

It was a bad song. Not solely through its sound, which was forgettable early 2000s hipster-hop, but the lyrical content. There was something sinister about a dude that looks like forgotten ‘90s comedian Phil Kay and his roly-poly chum holding forth on what urban music must do in order to meet with their approval. Two guys from the Essex commuter belt deciding that they have the right to ordain what does and does fall under the jurisdiction of the ‘four elements of hip-hop’. The fact that rappers are obviously socially irresponsible for shouting out guns, but Johnny Cash, who cocked more nines in his back catalogue than anyone with the possible exception of Bushwick Bill, is apparently beyond reproach. The fact that there are, apparently, people over the age of 15 who actively enjoy listening to The Doors. It’s a song with a lot to take in, and all of it was reactionary garbage.

And they even carry on their weird-ass Jurassic 5-fan-from-1998 views on rap onto the rest of their recordings. ‘Rapper’s Battle’, between a beat that sounds like an Atari 2600 with gastric flu and an outro that reminds you why Kid 606 shot himself dead in 2004, runs exactly the same gamut of_ “I am intelligent suburban rapper, why can’t the proletariat rest of hip-hop elevate themselves to my level?”_. It’s awkward, it’s ugly, and you get the feeling there are greater political forces at play here.

They’re not bigots though. They just suck ass. Trying to find a good idea on this album is a challenge. Trying to find a good idea executed well is akin to finding a Suicide Girl that wasn’t touched by her uncle as a child. Maybe to you, an extended metaphor comparing doomed love to the career trajectory of an old-school comedian is something that should exist outside of the confines of a freshman creative writing seminar. If so, congratulations, you can bump ‘Tommy C’ (sadly about Cooper, not Cannon) all day long. The rest of us are just going to need Solpadeine to get beyond one-third of this record.

It’d be nice to think the whole endeavour is just a big old satire. It’d be nice to think that the opening track, ‘The Beat That My Heart Skipped’ (great movie, Blockbuster that shit ASAP), with its embarrassing bitching about “soulless music, artless lyrics” is some clever parody of student union poetry slams. It’d be nice to think that Scroobius Pip’s inability to say any more than three syllables in a row without sounding like he’s just run up thirteen flights of stairs is a pastiche of clueless white-boy rappers who have no idea of what hip-hop is, and think it’s just a medium to crowbar their creepy worldview into song, regardless of melody or rhythm. It’d be nice to think that the lines_ “When I get back from hell again / I’m gonna be so elegant”_ is said by someone with a glint in his eye. It’s not. These guys mean absolutely everything they say and do on this record.

Being as there are types of carcinogen that people enjoy more than Akira the Don albums, and that nobody can remember Jon The Whiteboy Rapper without recourse to months of suppressed memory therapy, it’s hard to know what Lex – who put out ‘Thou…’ – were thinking of signing two guys who have gotten lost on the way from the student union poetry slam. Ideologically, this is the worst album of the year. Musically, it’s even poorer. Call it the first album in history that’s catered specifically for the dudes who spend their days posting to the BBC’s ‘Have Your Say’ forums. Then forget it ever existed.