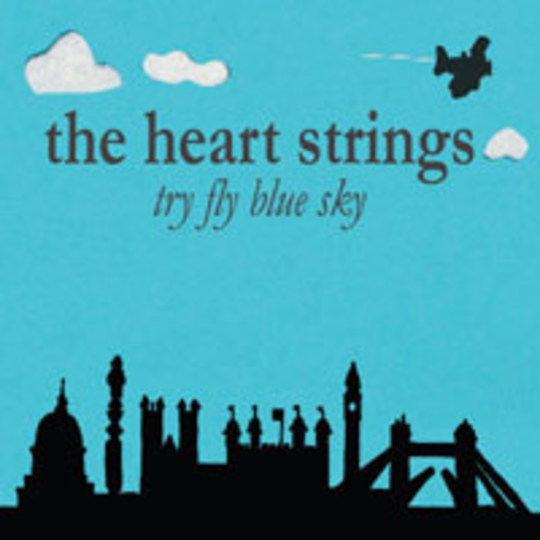 Everyone loves a spot of goody two shoes indie-pop jangling, right? Nah, me neither. But, try as I might, I just can’t bring myself to hate it. There’s nothing remotely inspiring about a flush of glockenspiel and brass floating feyly across some namby-pamby sub-GCSE poetry about dunking Jammy Dodgers into mugs of lukewarm Earl Grey yet, at the same tine, there’s little particularly offensive about it. Which is perhaps the most infuriating thing of all: such sterile sonic monotony does absolutely fuck-all to provoke opinion one way or the other.

Strangely, in the release of Try Fly Blue Sky it seems The Heart Strings are determined to prove themselves the quintessential embodiment of this uninspiring, insipid ‘meh’ mongering. A dashing, summertime splash of good time melodics, London-based twins Todd and Max Roache’s inaugural long-player fully embraces cooing pop-pukers The Feeling’s teeth-rotting candy-isms yet attempts to shoogle out of such incorrigible unhipness by styling itself on the pristine multi-layered preening of Sufjan Stevens and Stars.

Immaculately sheened by Midlake and Guillemots producer Julian Simmons,_ Try Fly Blue Sky_ is bulging with dreamy, sky-reaching soundscapes all dipped in an Enid Blyton-esque sense of escapism. Slow-burning tracks like ‘General Sherman’ and ‘Pedalo’ ooze a heavenly, child-like simplicity that’s cutesy and alluring in its own charming manner but so heavily sprinkled with xylophone chimes and parping brass are both it begins to feel like overcompensation for the stale, taste-bereft cake that lies underneath.

With couplets like “And thus began a summer camp sonnet / she saw a boy who would soon be a bee in her teenage bonnet” it’s impossible not to squirm throughout the whispering ‘Nina and Her Very Long Hair’, despite whatever virtues its escalating flutter of keys may exhale. Similarly embedded with corduroy-clad teen-tweeisms, the likes of ‘Cannonball Stan’ and opener ‘Kids’ continue this vein of daintily composed arrangements that swoop away the heart, leaving behind a sickly taste of winsome romanticism with their love-struck tales of kryptonite-pilfering and gleeful human cannonballs.

A moment of genuine tenderness resides in ‘He Wanted To Flay And He Flew’’s luscious, string laden jauntiness but the drib-drab la-la-la-ing of ‘Her New Disasters’ curtails this attempt at over-throwing the clutches of maudlin indie-popdom with a stream of stagnant, token lyricism best suited to the love-letters of a hormone-crazed fifteen year old. And herein lies Try Fly Blue Sky’s overwhelming flaw: every whimsical ditty floats along without ever calling attention to itself. It may not be intentional but The Heart Strings’ ever-present sanguinity is the only thing here that actually does create an opinion.