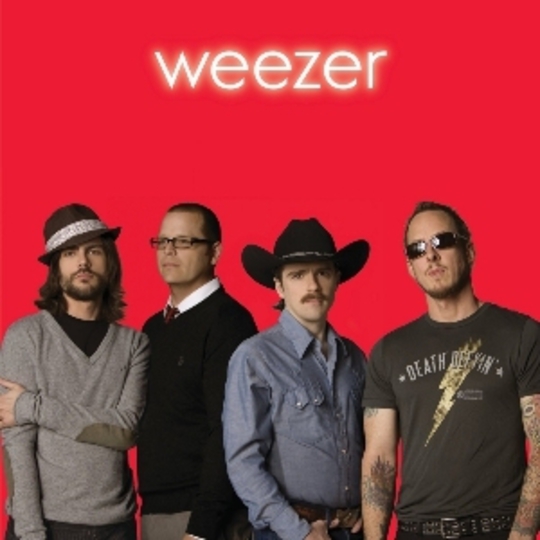 You’ve got to wonder – third self-titled LP in six with a cover like that, southern rap rasps, self-aggrandising lyrical quips guaranteed to have longstanding admirers cringe, a number sung entirely by drummer Pat Wilson – if Weezer aren’t taking the piss slightly with their anticipated latest long-player, sure to (already) be lovingly called ‘The Red Album’ in the tradition of preceding Blue (debut) and Green (album three) instalments.

Some – and I include myself – felt that the Los Angeles foursome’s wheels rather came off around the release of 2001’s Weezer, the green version; a commercially successful comeback though it was after a period of hiatus, spawning the hit singles ‘Hash Pipe’ and ‘Islands In The Sun’, it felt like frontman Rivers Cuomo was operating on autopilot. All the riffs, melodies and sing-along segments were in place, but where was the soul? Perhaps Weezer’s sole songwriter – until this record, anyway – was too bruised after the experience of 1996's Pinkerton, his most emotionally naked LP ever and one that was promoted while the band gradually drifted apart, to commit fully again to the artistic process. Perhaps his time at Harvard instilled a more calculated mentality where hooks took absolute priority over heartache and headaches. Perhaps, even, the singer’s love of association football distracted him from completely engrossing his attentions in the creative experience. Whatever the reason, the album felt cold, stripped of the rawness and vulnerability that made Weezer’s high watermark, and to a lesser extent their ’94 debut, such classic and timeless pop-rock LPs.

Another three albums later and Weezer, mark III, again finds its makers running on half-full rather than half-empty, but nevertheless comes across as a far cry from the band’s pre-break – 1997 to 2000 – material. Cuomo’s lyricism can be appreciated for its nudge-wink nostalgia and intelligent wordplay from time to time – ‘Heart Songs’ features a series of neat twists, acknowledging a succession of other popular recording artists, before celebrating Nevermind as the record that ultimately sparked Weezer into life; it’s a triumphant hell yeah to the songs that everyone keeps singing – but at others his played-for-laughs larger-than-life-ing grates terribly. ‘The Greatest Man That Ever Lived’ is undeniably penned with tongues in cheek – from its first lines, “You try to play cool like you just don’t care / But soon I’ll be playing in your underwear”, onwards, it’s a solid five minutes of chest-puffed braggadocio set to undulating riffs that break for an acoustic-accompanied howl only to snap back to Kid Rock-aping attention – but one must wonder what the hell Weezer are doing committing such a sub-Bloodhound Gang stinker to an LP that, for some, will be the last chance they get to recapture the fans they so let down with Make Believe, 2005’s fifth album that famously received a 0.4 score from Pitchfork.

Lead single ‘Pork & Beans’ – watch the video here – is a faint echo of past glories, Cuomo’s repeated refrains fighting a tide of screaming amplification that washes forth atop backing harmonies beamed straight from a 1960s chart countdown. Modern culture’s clearly on Cuomo’s mind as he references Timbaland’s recent commercial successes, while stating that he’ll never adhere to present trends and fashions – “I don’t give a hoot about what you think.” Ultimately, his sentiments are sound – everyone does like to dance to happy songs, and sing along too given the chance – but when looking outwardly rather than inwardly for his thematic inspiration the singer can’t engage an audience at the level he once regularly reached. He’s no longer singing with us, he’s singing at us, and at times during this Weezer the affect on the listener is overpowering in the wrong way: it’s too much, too Look At Me, too effortlessly tossed off in the knowledge that Weezer’s canon classics are already established and whatever follows is always going to fall short in the ears of the critics.

That’s the impression that Weezer leaves – for all its highs, of which there certainly are more than its immediate predecessor, the album captures the sound of a band writing and recording through habit, not necessarily because they’re especially driven to. This isn’t catharsis, it’s not envelope-pushing; it may be spoken about by label types as the band’s most experimental album yet, but it sticks close enough to familiar formulas to always have the listener yearning for just a snatch of a semblance of a whisper of Pinkerton’s fantastically understated grandeur. The tracks that do wander furthest from the source – the crap-rap of ‘Cold Dark World’ (featuring bassist Scott Shriner on vocals), the throwaway thrash of ‘Everybody Get Dangerous’ – prove to be the least memorable, the most substantial impression left by numbers that most closely resemble what’s come long before.

I’m all for progress, but only when it’s with the artist in question’s credibility fully considered. Weezer – the red version – chances its arm with mixed results without ever truly going as far as it could; thus, its divergences from the marked path are almost instantly forgettable, the million-dollar budget and time of producers Rick Rubin and Jacknife Lee perhaps not spent as well as they could've been. Kudos to Cuomo for bringing his bandmates further into the fold, encouraging them to step up to the microphone and make their mark on album six in a way they’ve never been offered the opportunity of before. But approach this with caution, old-timers, do: many of its ten tracks* are going to slip easily into a live set worth seeing forevermore, but don’t expect to get much repeat-play mileage from an LP bold of intent but muddled of execution.

A number of plays through and it’s still not clear who, exactly, the band are taking the proverbial out of: themselves, playfully and absolutely intentionally, or us, fans who’ve become conditioned to not expecting the best from a band who, personally, have been a shadow of themselves since that first ‘sequel’ release.

* The UK version comes with a pair of bonus covers: Talk Talk’s ‘Life Is What You Make It’ and The Band’s ‘The Weight’